The Museum of Fine Arts (Hungarian: Szépművészeti Múzeum [ˈse̝ːpmyːve̝ːsɛti ˈmuːzeum]) is a museum in Heroes' Square, Budapest, Hungary, facing the Palace of Art.

On February 16, 2015, the museum closed to the public for renovation. It is expected to reopen in March 2018, after three years of work.[1] In the meantime, a selection of works are housed in the Hungarian National Gallery.

The gallery holds the second largest collection of Egyptian art in central Europe. It comprises a number of collections bought together by Hungarian Egyptologist Eduard Mahler in the 1930s. Subsequent digs in Egypt have expanded the collection. Some of the most interesting pieces are the painted mummy sarcophagi. 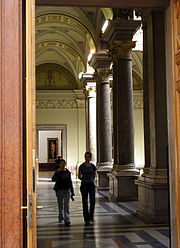 The core of the collection was made up of pieces acquired from Paul Arndt, a classicist from Munich. The exhibition mainly includes works from Ancient Greece and Rome. Most significant is the 3rd century marble statue called the Budapest dancer. The Cyprean and Mycenaean collection is also notable, also the ceramics and bronzes.

The 3000 paintings in the collection offer an almost uninterrupted survey of the development of European painting from the 13th to the late 18th centuries. The core of the collection is constituted by the 700 paintings acquired from the Esterhazy estate. The collection is split up into Italian, German, Netherlandish, Flemish, French, English and Spanish art. The most important works include Maso di Banco's Coronation of the Virgin, Sassetta's Saint Thomas Aquinas at Prayer, Domenico Ghirlandaio's Saint Stephen Martyr, Gentile Bellini's Portrait of Caterina Cornaro, Giorgione's Portrait of a Young Man, Raphael's Esterhazy Madonna, Giambattista Pittoni's St Elizabeth Distributing Alms, Correggio's Madonna and Child with an Angel, three works by Sebastiano del Piombo, Bronzino's Adoration of the Shepherds as well as his Venus, Cupid and Jealousy, Romanino's Doge Agostino Barbarigo Handing over a Banner to Niccolo Orsini, Titian's Portrait of Doge Marcantonio Trevisani, Tintoretto's Supper at Emmaus, Tiepolo's St James the Greater in the Battle of Clavijo, Dürer's Portrait of a Young Man, Bernard van Orley's Portrait of Emperor Charles V, eight pictures by Lucas Cranach the Elder, Pieter Bruegel the Elder's St John the Baptist Preaching, Rubens's Mucius Scaevola Before Porsenna, two excellent portraits by Frans Hals, and a particularly strong collection of works by Spanish masters including El Greco, Velázquez and Goya. 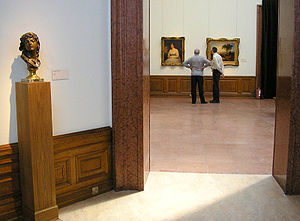 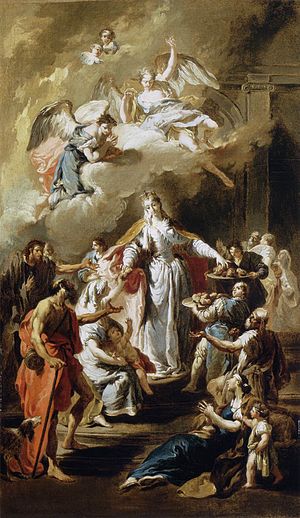 The collection's main section is devoted to pieces from the Middle Ages to the 17th century. It was based on the Italian collection of Karoly Pulszky and Istvan Ferenczy's bronze collection. From the latter came one of the most treasured works, the small equestrian by Leonardo da Vinci. A number of painted wooden sculptures feature in the German and Austrian section.

The collection shows selected rotating exhibitions of its collection of 10,000 drawings and 100,000 prints originating mainly from the Esterhazy, Istvan Delhaes and Pal Majovsky acquisitions. All periods of European graphic art are richly represented. Important pieces include two studies by Leonardo da Vinci for the 'Battle of Anghiari', 15 drawings by Rembrandt, 200 pieces by Goya and French aquatints. 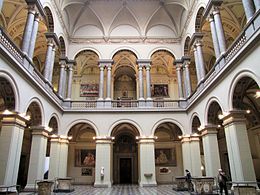 One of the halls in the museum 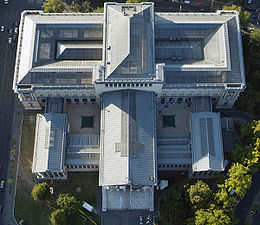 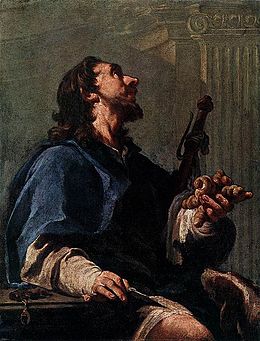 The museum's collection of 19th- and 20th-century art is less significant than those found in other departments; it is a younger collection. The bulk of the painting is from the Biedermeier period and French art. From the latter are representatives of the Romantic period (Eugène Delacroix), the Barbizon school (Jean-Baptiste-Camille Corot, Gustave Courbet) and Impressionism (Édouard Manet, Claude Monet, Camille Pissarro, Pierre-Auguste Renoir, Henri de Toulouse-Lautrec). There is a large collection of sculptures by Auguste Rodin and Constantin Meunier.

Hungarian artist Victor Vasarely donated a significant collection of his works to the gallery. These have found a permanent home outside the walls of the gallery at the Zichy mansion in Obuda. The two storey wing of the building is known as the Vasarely Museum and is the only one of its kind in eastern Europe.

Directors of the museum

In 2008, the director of the Museum of Fine Arts, László Baán, proposed the merging of his museum with that of the Hungarian National Gallery, due to the similar exhibition and collection profile of the two. Both (along with the Ludwig Museum of Contemporary Art) specialize in 20th century and contemporary fine art, much of which was created by Hungarian artists living overseas.[2] After his request to add an €18million underground extension to the Museum of Fine Arts — which would have united collections spread across the city — was denied in February 2011, Baán presented an alternative plan to the government to build two new buildings at the cost of €150m. He envisioned the new buildings — one housing contemporary European art and the other Hungarian photography — as a "special museum island" that would complement the Museum of Fine Arts and the Budapest Art Hall (Műcsarnok) by permanently joining the two collections by 2017.[3]

In September 2011, Secretary of State for Culture Géza Szőcs officially announced plans to build a new structure along Andrássy út close to City Park and near the existing Budapest Museum of Fine Arts and Budapest Art Hall (Műcsarnok). This building would house the collections of the current Hungarian National Gallery.[4] This expanded plan, which would utilize the entire boulevard, is also referred to as the Budapest Museum Quarter or Andrássy Quarter.[5]

In early December 2011, Ferenc Csák — director of the Hungarian National Gallery since 2010 and critical of the proposed merger of the gallery with the Museum of Fine Arts— called the merge process “[v]ery unprofessional, anti–democratic and short–sighted” and announced that he would resign at the end of 2011.[6] As of March 5, 2012, a new director had not been named and the Hungarian National Gallery was being led by Deputy General Director György Szűcs.[7]