The Museum of London documents the history of London from prehistoric to modern times. The museum is located on London Wall, close to the Barbican Centre as part of the striking Barbican complex of buildings created in the 1960s and 1970s as an innovative approach to re-development within a bomb-damaged area of the City of London.

It is a few minutes' walk north of St Paul's Cathedral, overlooking the remains of the Roman city wall and on the edge of the oldest part of London, now its main financial district. It is primarily concerned with the social history of London and its inhabitants throughout time. The museum is jointly controlled and funded by the City of London Corporation and the Greater London Authority.

The museum is the largest urban history collection in the world, with more than six million objects. It hosts more than one million visitors each year.[1]

In March 2015, the museum announced plans to move from its Barbican site to nearby Smithfield Market. The move, contingent upon raising an estimated £70 million, is planned to be complete by 2021.[1]

The amalgamation of the collections previously held by the City Corporation at the Guildhall Museum and of the London Museum, which was located in Kensington Palace was agreed in 1964.[2] The Museum of London Act, allowing for the merger, was passed in the following year.[3][4]

The museum was opened in December 1976 as part of the Barbican Estate,[2] The architects were Philip Powell and Hidalgo Moya,[2] who adopted an innovative approach to museum design, whereby the galleries were laid out so that there was only one route through the museum – from the prehistoric period to the modern galleries.

The museum comprises a series of chronological galleries containing original artefacts, models, pictures and diagrams, with a strong emphasis on archaeological discoveries, the built city, urban development and London's social and cultural life, with interactive displays and activities for all ages. Fragments of the Roman London Wall can be seen just outside the museum. The prehistoric gallery, "London Before London" and the "Medieval London" gallery have already been updated, and in 2010 a refurbished gallery on "War, Plague and Fire" opened, covering the period of the English Civil War and the Great Fire of London. 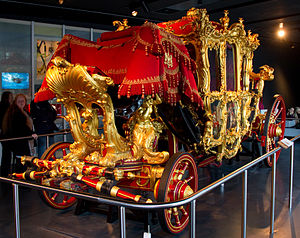 Lord Mayor's Coach on display in the Museum

The museum had a £20 million redevelopment which was completed in May 2010. This is its biggest investment since opening in 1976. The re-design, by London-based architects Wilkinson Eyre, tells the story of London and Londoners from the Great Fire of 1666 to the present day. The transformation includes four new galleries. The new City Gallery features large street level windows along London Wall and provides an illuminated showcase for the Lord Mayor's State Coach, which takes to the streets each November for the Lord Mayor's Show.

The Galleries of Modern London increased the museum's exhibition space by 25 percent and enabled the display of 7,000 objects. Star exhibits include a reconstruction of Georgian pleasure gardens, the foreboding wooden interior of the Wellclose debtors prison cell, an art deco lift from Selfridges department store and the puppet stars of BBC children's TV Andy Pandy and Bill and Ben.

The "Expanding City" gallery covers the period 1660s to 1850. "People's City" addresses 1850 to 1940s, including a "Victorian Walk" with recreated shops and public buildings, and sections on the West End, Suffragettes, World War I and World War II, and everyday life.

The new galleries place a renewed emphasis on contemporary London and contemporary collecting. "World City" is the gallery which tells London's story from 1950 to the present day. Fashion looms large here – from formal suits of the 1950s, through to the Mary Quant dress of the swinging 1960s, hippy chic in the 1970s and the bondage trousers and ripped T-shirts of the punk era. Fashion comes right up to date with a pashmina from Alexander McQueen's 2008 collection.

The Sackler Hall contains an elliptical LED curtain where the work of up-and-coming young filmmakers is screened in a bi-annual Museum of London Film Commission, in association with Film London. A temporary exhibition space, "Inspiring London", features a changing programme of displays on the theme of creativity and inspiration.

In 2003, the Museum of London Docklands (formerly Museum in Docklands) was opened in a 19th-century grade I listed warehouse near Canary Wharf on the Isle of Dogs. The Museum of London Docklands charts the history of London as a port, beginning 2,000 years ago with the Roman trading post set up on the banks of the Thames and following London's expansion into the biggest port the world had ever known. In November 2007, it opened the capital's first permanent gallery examining London's involvement in the transatlantic slave trade, "London, Sugar & Slavery". 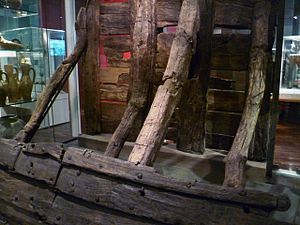 Part of a 13th-century timber wall from the Thames riverbank at Billingsgate, excavated in 1982 and now displayed in the Museum.

MOLA employs around 190 archaeologists working on most of the major archaeological sites in London. Independence gives MOLA a stronger remit; it streamlines operations, reduces duplication and cuts red tape. Originally, MOLA was a much smaller department within the Museum of London but it expanded hugely – and outgrew its parent organisation. Independence gives MOLA the freedom to operate and to explore new markets across the country and overseas.

The Museum of London and MOLA retain close links via a partnership arrangement set out in a Memorandum of Understanding (MOU). This is to the clear benefit of both organisations and includes key areas of collaboration – on initiatives such as educational outreach, fundraising and public relations.

MOLA will continue to have its headquarters at Mortimer Wheeler House (in Shoreditch) and share specialist expertise and equipment with Museum of London colleagues at London Wall.

The current logo was designed by the London-based advertising agency Coley Porter Bell as part of the rebranding and redevelopment of the museum in 2009. The overlapping coloured layers depict the map outline of the city at various points of its history. It won a Mobius Advertising Award in the recreation and entertainment corporate identity category.[5]

In March of 2015, the museum revealed plans to vacate its Barbican site and move to the General Market Building at the nearby Smithfield site.[6] Reasons for the proposed move include the claim that the current site is difficult for visitors to find, and that by expanding, from 17000 square metres to 27000, a greater proportion of the Museum's collection can be placed on display. The cost of the move is estimated to be in the region of £70 million and, if funding can be achieved, would be complete by 2021.[7] Plans for the vacated Barbican site include it becoming a permanent home to the London Symphony Orchestra.