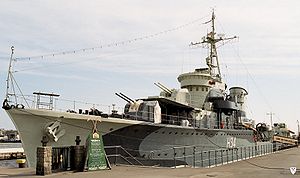 The Polish destroyer ORP Błyskawica is currently preserved as a museum ship in Gdynia.

For ships that are not original see Ship replica. For preserved incomplete ships see Ships preserved in museums.

A museum ship, or sometimes memorial ship, is a ship that has been preserved and converted into a museum open to the public, for educational or memorial purposes. Some are also used for training and recruitment purposes, a use found mostly with the small number of museum ships that are still operational, i.e., capable of regular movement.[1]

There are several hundred museum ships around the world, with around 175 of them organised in the Historic Naval Ships Association[2] though there are also many non-naval museum ships as well, from general merchant ships to tugs and lightships. Many, if not most, museum ships are also associated with a maritime museum.

File:Yokosuka-mikasa-08-2010.png
Mikasa, one of the earlier ships of the Empire of Japan, and the only surviving predreadnought battleship. 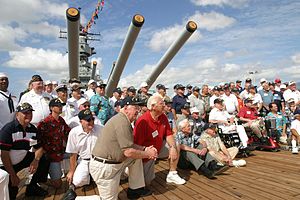 Former crew members of USS Missouri pose for photos after the Anniversary of the End of World War II ceremony.

Despite the long history of sea travel, the ravages of the elements and the expense of maintenance result in the eventual destruction of nearly all ships ever built, often by sinking, usually by being broken up and sold for scrap. Only a few survive, sometimes because of historical significance, but more often due to luck and circumstance. Since an old ship tied up at dockside, without attention, still decays and eventually sinks, the practice of recent years has been to form some sort of preservation society, solicit donations from governments or private individuals, organize volunteer labor from the enthusiasts, and open the restored ship to visitors, usually for a fee.

The restoration and maintenance of museum ships presents problems for historians who are asked for advice, and the results periodically generate some controversy[citation needed]. For instance, the rigging of sailing ships has almost never survived, and so the rigging plan must be reconstructed from various sources. Studying the ships also allows historians to analyze how life on and operation of the ships took place.[3] Numerous scientific papers have been written on ship restoration and maintenance, and international conferences are held discussing the latest developments.[4] Some years ago, the Barcelona Charter was signed by a variety of international owner organizations of traditional vessels, and provides certain accepted minimum criteria for the restoration and operation of traditional watercraft still in operation.[5]

Another consideration is the distinction between a "real" museum ship, and a ship replica. As repairs accumulate over time, less and less of the ship is of the original materials, and the lack of old parts (or even "appropriate" work tools) may lead to the use of modern "short-cuts" (such as welding a metal plate instead of riveting it, as would be the case during the ships historical period).[6] Visitors without historical background are also often unable to distinguish between a historical museum ship and a (more-or-less historically relevant) ship replica, which may serve solely as a tourist attraction.[3]

File:Vasa Museum interior1.jpg
The 17th-century warship Vasa on display in the Vasa Museum

Typically the visitor enters via gangplank, wanders around on the deck, then goes below, usually using the original stairways, giving a sense of how the crew got around. The interior features restored but inactivated equipment, enhanced with mementos including old photographs, explanatory displays, pages from the ship's logs, menus, and the like. Some add recorded sound effects, audio tours or video displays to enhance the experience.

In some cases the ships radio room has been brought back into use, with volunteers operating amateur radio equipment. Often the callsign assigned is a variation on the original identification of the ship. For example, the submarine USS Cobia, which had the call NBQV, is now on the air as NB9QV. The WWII submarine USS Pampanito SS383, berthed at the National Maritime Historic Park in San Francisco, had the wartime call NJVT and is now on the air as NJ6VT. In other cases, such as the USS Missouri, a distinctive call (in this case KH6BB) is used. This radio work not only helps restore part of the vessel, but provides worldwide publicity for the museum ship.

A number of the larger museum ships have begun to offer hosting for weddings, meetings, and other events, sleepovers, and on a few ships still seaworthy, cruises. In the United States, this includes the USS Constitution's annual "turnaround", when the old ship is towed out into the harbor and brought back in facing the other way, so as to weather evenly. A place on the deck is by invitation or lottery only, and highly prized.[7]

Many consider the tourism appeal of an interesting old vessel on the city waterfront strong enough that any port city should showcase one or more museum ships. This may even include building a replica ship at great expense.[8]