Music for the Royal Fireworks 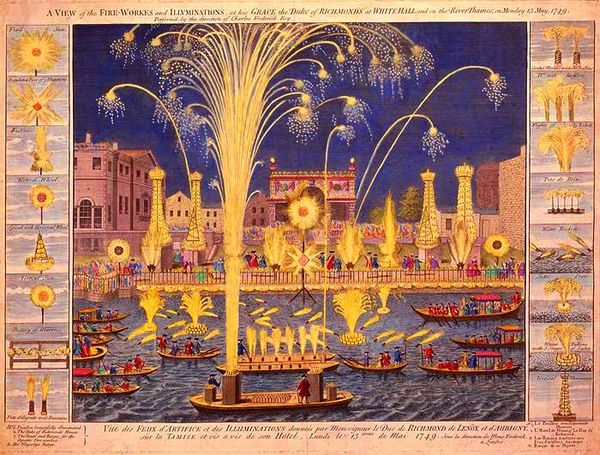 Handel's Fireworks Music, performed at his GRACE the Duke of RICHMOND'S at WHITEHALL and on the River Thames on Monday 15 May 1749. Performed by the direction of Charles Fredrick Esq. A hand-coloured etching.

The Music for the Royal Fireworks (HWV 351) is a wind band suite composed by George Frideric Handel in 1749 under contract of George II of Great Britain for the fireworks in London's Green Park on 27 April 1749. It was to celebrate the end of the War of the Austrian Succession and the signing of the Treaty of Aix-la-Chapelle in 1748.

During the preparations Handel and John Montagu, responsible for the Royal Fireworks, had an argument about adding violins.[citation needed]. The duke made clear to Handel that the King George II had a preference for only wind instruments and drums. Handel left out the string instruments and against his will there was also a full rehearsal of the music at Vauxhall Gardens and not in Green Park. On 21 April 1749 over twelve thousand people, each paying 2/6 (that is, two shillings and six pence) rushed for it, causing a three-hour traffic jam of carriages on the London Bridge, the only route to the area south of the river.

Six days later, on 27 April, the performing musicians were in a specially constructed building that had been designed by Servandoni, a theatre designer, who used four Italians to assist him.[1] Andrea Casali and Andrea Soldi designed the decorations. The fireworks themselves were devised and controlled by Gaetana Ruggieri and Giuseppe Sarti, both from Bologna.[2][3][4] Charles Frederick was the controller, captain Thomas Desaguliers was the chief fire master.[5] The display was not as successful as the music itself: the weather was rainy and in the middle of the show the right pavilion caught fire.

Music for the Royal Fireworks opens with a French overture and includes a bourrée and two minuets.

The work is in five movements:

It was scored for a large wind band ensemble consisting of 24 oboes, 12 bassoons and a contrabassoon, nine natural trumpets, nine natural horns, three pairs of kettledrums, and side drums which were given only the direction to play "ad libitum"; no side drum parts were written by Handel. Handel was specific about the numbers of instruments to each written part. In the overture there are assigned three players to each of the three trumpet parts; the 24 oboes are divided 12, 8 and 4; and the 12 bassoons are divided 8 and 4. The side drums were instructed when to play in La Réjouissance and the second Menuet, but very likely also played in the Ouverture.

Handel re-scored the suite for full orchestra and for a performance on 27 May, in the Foundling Hospital. Handel wrote notices in the score: the violins to play the oboe parts, the cellos and double basses the bassoon part, and the violas either a lower wind or bass part. The instruments from the original band instrumentation play all the movements in the revised orchestral edition except the gentle Bourrée and the first Menuet, which are played by only the oboes, bassoons, and strings alone.[6]

There are many recordings. Handel's "Water Music", although it was composed more than thirty years earlier, is often paired with the "Music for the Royal Fireworks" as both were written for outdoor performance. Together, these works constitute Handel's most famous music for what we would now consider the orchestra. Older recordings tend to use arrangements of Handel's score for the modern orchestra, for example the arrangements by Hamilton Harty and Leopold Stokowski. More recent recordings tend to use more historically informed performance methods appropriate for baroque music and often use authentic instruments.[7]

There are also arrangements for pipe organ, alone or with brass.[8]

This music was performed under the baton of Andrew Davis for the Golden Jubilee of Queen Elizabeth II on 1 June 2002, at the Buckingham Palace gardens, complete with fireworks.[9]