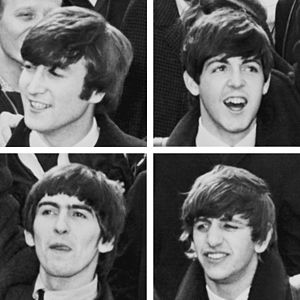 The Beatles are by far the city's most famous musical exports. They have sold more albums in the US than any other artist in history 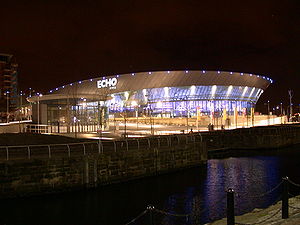 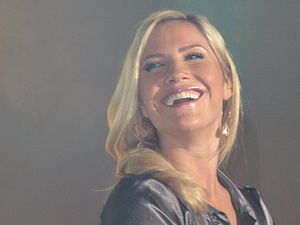 A recent number-one UK single by a Liverpudlian is by Heidi Range who belongs to the girlband, Sugababes

Liverpool has a lengthy tradition of music both classical and pop. It is well known for The Beatles (who recorded 17 UK and 20 US number-one singles). Its pop and rock music scene has also been important in the development of a number of other bands and artists since the 1950s.

In 2001 the Guinness Book of Records declared Liverpool "City of Pop" due to the many number one records to have emerged from the city. The most famous band to have come from Liverpool is The Beatles who played many of their early gigs at the Cavern Club.

Many sea shanties specifically refer to Liverpool, such as "Heave Away", "Liverpool Judies", and "Maggie May", which was later performed by The Beatles.

In the 1960s, the city was home to the development of the Merseybeat style of pop music, popularised by artists including Gerry & The Pacemakers. However, even before Merseybeat Liverpool had successful acts such as Frankie Vaughan, Lita Roza and Billy Fury. In the late 1970s/early 1980s, Echo & the Bunnymen, A Flock of Seagulls, Teardrop Explodes, the Mighty Wah!, OMD, China Crisis, Frankie Goes to Hollywood and Dead or Alive emerged.

1990s bands that enjoyed success were The Boo Radleys, The La's, The Real People, The Farm and Cast. Since 2000 bands such as The Zutons, The Wombats and The Coral have become popular. As a backlash to this regular guitar pop music, another scene far more influenced by post punk and experimental music has emerged more recently spearheaded by bands such as Ladytron, Clinic, a.P.A.t.T., Hot Club de Paris, Kling Klang, and Police Squad. Meanwhile Anathema has made its own way from the early 90s era of doom metal to its current sound with a mixture of psychedelic, alternative and progressive rock.

In 2008 World Museum Liverpool (in partnership the Institute of Popular Music at University of Liverpool) created "The Beat Goes On"[1] exhibition charting the history of music in Liverpool in depth, from 1945 to the present day.

The Liverpool International Music Festival (LIMF)[2] evolved from the Mathew Street Music Festival, which was the largest annual free music festival in Liverpool attracting over 200,000 visitors to the City.

Liverpool International Music Festival is an annual music festival, which takes place during August throughout Liverpool. In 2013, its first year, it took place over 5 weeks and encompassed a number of smaller festivals and events including Summer Camp Festival, International Beatles Week & Liverpool Fringe Festival. Over the festival period there were over 1000 live performances including Vasily Petrenko & The Royal Liverpool Philharmonic Orchestra, The Charlatans, Soul II Soul, Damian Marley, Texas, Rebecca Ferguson, The Saturdays,The Christians, Deaf School and The Farm. The festival also offered an Youth Music Academy, supported by Virgin Trains, a music related Pop Up Art Gallery and a number of showcases and events.

In 2011 the GIT Award[3] - formed through influential Liverpool music blog Getintothis - was founded. Dubbed the 'Scouse Mercury Prize' by NME, the GIT Award celebrated and championed Merseyside's revitalised music scene. Garnering backing from over 90 businesses and with a judging panel including the Guardian, NME, 6 Music and founder Peter Guy from the Liverpool Echo, the GIT Award nominated 12 artists representing the best artists from that calendar year.

From over 480 entries, the 12 shortlisted GIT Award 2013 artists were Baltic Fleet, Barberos, By The Sea, Nadine Carina, Clinic, Conan, Dan Croll, John Heckle, Jetta, Tyler Mensah, Stealing Sheep and Wave Machines. The nominees performed at a special showcase night at Leaf on Bold Street in April 2013 before Baltic Fleet was unveiled as the eventual winner. A special Inspiration Award, recognising services to Liverpool's music industry was won by The Justice Collective and Tyler Mensah claimed the People's Choice Award.

Liverpool hosts several music festivals each year which celebrate and represent the different cultures within the city. Africa Oye[4] is the UK's largest free festival of African music.

The GIT Award shortlist in 2015 was Circa Waves, D R O H N E, Gulf, Hooton Tennis Club, Roxanne Jones, Låpsley, Esa Shields, Sundowners, Xam Volo, Jane Weaver and We Are Catchers - with the winners being All We Are.

In 2014 the GIT Award founded the One To Watch prize which champions one young, emerging artist who judges recognise huge artistic potential. Previous recipients are Låpsley (2014) and Louis Berry (2015). The GIT Award has held launch parties at Leaf on Bold St, Oh Me Oh My on Water Street and 24 Kitchen Street.

The 1960s saw the emergence of Merseybeat and the Cavern Club, the late 1970s and early 1980s a punk scene centered on another club, Eric's also on Mathew Street, while 1990s dance clubs included Quadrant Park, Cream and more recently Chibuku.[6] The majority of the city's largest and most popular music venues and clubs are located at Concert Square, Mathew Street, Hardman Street and Hope Street, though the Baltic Triangle region of the city has seen a growth in popularity, with a number of venues appearing in previously disused warehouses. Current venues include the Echo Arena Liverpool, East Village Arts Club, Kazimier, Zanzibar, O2 Academy, The Magnet, Camp & Furnace and Leaf on Bold Street.

A number of independent record labels are currently active in the Liverpool scene:

Below is a list of songs by artists from Liverpool that attained the number one position in the UK Singles Chart.