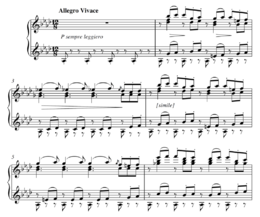 Scherzo in A flat (Borodin)

Although today composition is considered to consist of the manipulation of each aspect of music (harmony, melody, form, rhythm, and timbre), according to Jean-Benjamin de Laborde (1780, 2:12):

Composition consists in two things only. The first is the ordering and disposing of several sounds...in such a manner that their succession pleases the ear. This is what the Ancients called melody. The second is the rendering audible of two or more simultaneous sounds in such a manner that their combination is pleasant. This is what we call harmony, and it alone merits the name of composition.[1]

A piece of music exists in the form of a composition in musical notation or as a single acoustic event (a live performance or recorded track). If composed before being performed, music can be performed from memory, through written musical notation, or through a combination of both. Compositions comprise musical elements, which vary widely from person to person and between cultures. Improvisation is the act of composing musical elements spontaneously during the performance.[2]

Piece is a "general, non-technical term [that began to be] applied mainly to instrumental compositions from the 17th century onwards....other than when they are taken individually 'piece' and its equivalents are rarely used of movements in sonatas or symphonies....composers have used all these terms [in their different languages] frequently in compound forms [e.g. Klavierstück]....In vocal music...the term is most frequently used for operatic ensembles..."[3]

In discussing the structure (or organization) of a musical work, the composition of that work is generally called its musical form. These techniques draw a parallel to art's formal elements. Sometimes, the entire form of a piece is through-composed, meaning that each part is different, with no repetition of sections; other forms include strophic, rondo, verse-chorus, or other parts. Some pieces are composed around a set scale, where the compositional technique might be considered the usage of a particular scale. Others are composed during performance (see improvisation), where a variety of techniques are also sometimes used. Some are used from particular songs which are familiar.

Important in tonal musical composition is the scale for the notes used, including the mode and tonic note. In music using twelve tone techniques, the tone row is even more comprehensive a factor than a scale. Similarly, music of the Middle East employs compositions that are rigidly based on a specific mode (maqam) often within improvisational contexts, as does Indian classical music in both the Hindustani and the Carnatic system.

In the music tradition of India there are many forms of musical compositions which to some degree is on account of many musical styles prevalent in different regions of the country, such the Hindustani music, Karnatick music, Bengali music and so forth. Another important influence in the compositions is its link with folk music, both indigenous and also from musical culture of Arabia, Persia and Bengal.[4]

In the Hindustani musical tradition, Drupad (originally in Sanskrit and later adaptations in Hindi and Braj Bhasha) is among one of the ancient compositions and had formed the base for other forms in this music tradition such as khyal, thumri and raga. In the Karnatak music tradition the compositions are in the form of Kriti, varanam and padam.[4] 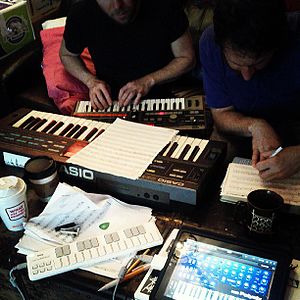 One method to compose music is starting with a chord progression. These chords could be selected arbitrarily or with specific purpose to reflect the tone of the emotion being conveyed. For example, selecting a minor key, but with mostly major chords (i.e. III, VI, VII) might convey a hopeful feeling. Once the series of chords is selected, additional lines are added to embellish, adding depth to the music. Usually this includes at least a lead melody line and often one or more harmony lines. Popular music is often written this way (see: Song structure) where a selected series of chords forms the structure of each of a particular section of the song (ex. Verse, Chorus). The melody line is often dependent on the writer's chosen lyrics and can vary in detail from verse to verse.

Another method involves free playing of your desired instrument. For example, a pianist might simply sit and start playing chords, melodies, or random notes that come to mind in order to find some inspiration, then build on the discovered lines to add depth.[clarification needed]

As technology progresses, new and inventive methods of music composition come about. One such method involves using computer algorithms contained in samplers to directly translate the phonetics of speech into digital sound.[citation needed] EEG headsets have also been used to create music by interpreting the brainwaves of musicians.[5] This method has been used for Project Mindtunes,[6] which collaborating disabled musicians with DJ Fresh, and also by artists Lisa Park and Masaki Batoh.

Many contemporary songs are organized into sections as well. These sections are usually alternating verse and chorus, often with a bridge before the last chorus. The differing verses will share chord progressions while the chorus is often exactly the same throughout.[citation needed]

The task of adapting a composition for musical instruments/ensembles, called arranging or orchestrating, may be undertaken by the composer or separately by an arranger based on the composer's core composition. A composition may have multiple arrangements based on such factors as intended audience type and breadth, musical genre or stylistic treatment, recorded or live performance considerations, available musicians and instruments, commercial goals and economic constraints.

Based on such factors, composers or arrangers must decide upon the instrumentation of the original work. Today, the contemporary composer can virtually write for almost any combination of instruments. Some common group settings include music for full orchestra (consisting of just about every instrument group), concert band (which consists of larger sections and greater diversity of woodwind, brass, and percussion instruments than are usually found in the orchestra), or a chamber group (a small number of instruments, but at least two). The composer may also choose to write for only one instrument, in which case this is called a solo.

Composers are not limited to writing only for instruments, they may also decide to write for voice (including choral works, operas, and musicals) or percussion instruments or electronic instruments. Alternatively, as is the case with musique concrète, the composer can work with many sounds often not associated with the creation of music, such as typewriters, sirens, and so forth.

In Elizabeth Swados' Listening Out Loud, she explains how a composer must know the full capabilities of each instrument and how they must complement each other, not compete. She gives an example of how in an earlier composition of hers, she had the tuba above the piccolo. This would clearly drown the piccolo out, thus giving it no purpose in the composition. Each instrument chosen to be in a piece must have a reason for being there that adds to what the composer is trying to convey within the work.[7]

Arranging is composition which employs prior material so as to comment upon it such as in mash-ups and various contemporary classical works.[8] The process first requires analysis of existing music, and then rewriting (and often transcription) for an instrumentation other than that for which it was originally intended. It often (but not always) involves new supporting material injected by the arranger. Different versions of a composed piece of music is referred to as an arrangement.

In some jurisdictions, the composer can assign copyright, in part, to another party. Often, composers who aren't doing business as publishing companies themselves will temporarily assign their copyright interests to formal publishing companies, granting those companies a license to control both the publication and the further licensing of the composer's work. Contract law, not copyright law, governs these composer–publisher contracts, which ordinarily involve an agreement on how profits from the publisher's activities related to the work will be shared with the composer in the form of royalties.

The scope of copyright in general is defined by various international treaties and their implementations, which take the form of national statutes, and in common law jurisdictions, case law. These agreements and corresponding body of law distinguish between the rights applicable to sound recordings and the rights applicable to compositions. For example, Beethoven's 9th Symphony is in the public domain, but in most of the world, recordings of particular performances of that composition usually are not.

For copyright purposes, song lyrics and other performed words are considered part of the composition, even though they may have different authors and copyright owners than the non-lyrical elements.

Many jurisdictions allow for compulsory licensing of certain uses of compositions. For example, copyright law may allow a record company to pay a modest fee to a copyright collective to which the composer or publisher belongs, in exchange for the right to make and distribute CDs containing a cover band's performance of the composer or publisher's compositions. The license is "compulsory" because the copyright owner cannot refuse or set terms for the license. Copyright collectives also typically manage the licensing of public performances of compositions, whether by live musicians or by transmitting sound recordings over radio or the Internet.

Even though the first US copyright laws did not include musical compositions, they were added as part of the Copyright Act of 1831.

Copyright, Designs and Patents Act 1988 defines a musical work to mean "a work consisting of music, exclusive of any words or action intended to be sung, spoken or performed with the music."[10]

In India The Copy Right Act, 1957 prevailed for original literary, dramatic, musical and artistic work till the Copyright (Amendment) Act, 1984 was introduced. Under the amended act, a new definition has been provided for musical work which states "musical works means a work consisting of music and included any graphi notation of such work but does not included any words or any action intended to be sung, spoken or performed with the music."[11]