From Infogalactic: the planetary knowledge core
Jump to: navigation, search
For other uses of this term, see Musketeer (disambiguation). 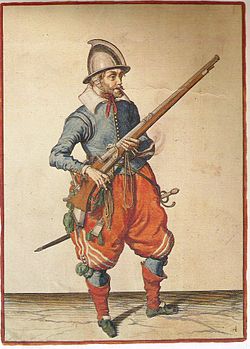 A Dutch musketeer, holding a musket by Jacob van Gheyn in 1608

A musketeer (French: mousquetaire) was an early modern type of soldier equipped with a musket. Musketeers were an important part of early modern armies, particularly in Europe. In most cases they served on foot as infantry, though sometimes they could operate on horseback: as a cavalryman or dragoon. The musketeer was a precursor to the rifleman. Muskets were replaced by rifles in most western armies during the mid-1850s. The traditional designation of "musketeer" for an infantry private survived in the Imperial German Army until World War I. 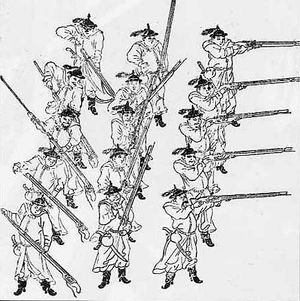 Musketeers in China from the Ming dynasty

Muskets were used in China at least from the 14th century and musketeers were utilized in the Ming (1368–1644)[1] and Qing dynasties (1644–1911). In Zhao Shizhen's book of 1598 AD, the Shenqipu, there were illustrations of Ottoman Turkish riflemen with detailed illustrations of their muskets, alongside European musketeers with detailed illustrations of their muskets.[2] There was also illustration and description of how the Chinese had adopted the Ottoman kneeling position in firing while favoring European-made rifles.[3] The Chinese also built the first repeating fire-arm, several barrels behind a small wooden shield: the musketeer would turn the barrels and light each barrel with a slow match one by one. These weapons were most effective being fired from walls or high positions. Needham considered this weapon to be a "primitive machine-gun".[4][5]

The famous Janissary corps of the Ottoman army were using matchlock muskets as early as the 1440s.[6] The Ottoman Empire, centering on Turkey and extending into Arabia, used muskets to conquer Constantinople (modern Istanbul) and were one of the earliest users of muskets in a military conflict. It also utilized large cannons, the Great Turkish Bombard and incendiary devices. They are also probably the first to use muskets aboard ships. 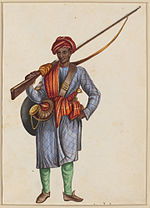 A painting of a Mughal Infantryman

Musket warfare became an integral part of Indian warfare when they were introduced to India by the Moghuls.[citation needed] They were an important defense against the tank-like War Elephants. Both the Mughals and Indians (such as the Marathas, Rajputs and Sikhs) used musketeers in cover formations while sending volleys of musket fire on unsuspecting soldiers, horses, and elephants. Many Indian gunsmiths existed during the 17th and 18th centuries, creating regular muskets and some combination weapons. 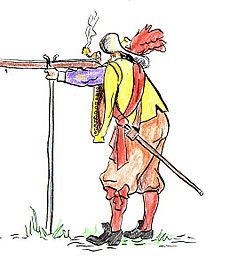 In the Spanish army, the Tercio or the Spanish Square was a mixed infantry formation that theoretically could have up to 3,000 pikemen, swordsmen and musketeers, although on the battlefield, it was usually much smaller. It was nigh on invincible in its era, capitalizing on the brute strength and close-range abilities of the pikemen and the long-range projectile capabilities of the muskets. In practice, it appeared as a loosely formed phalanx in function, but was far more flexible and deadly. The musketeer manned tercios were developed from the earlier arquebusier manned coronelías which had firmly established their fearsome reputation by defeating the French and capturing their king at the Battle of Pavia in 1525. 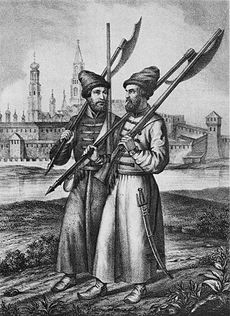 Streltsy (Russian: Стрельцы) were the units of Russian guardsmen (sl. strelets, стрелец. literally "shooter"; often translated as "musketeer," but more properly "harquebuses") from the 16th to the early 18th centuries, armed with firearms and halberds. They are also collectively known as Strelets Troops (Стрелецкое Войско).

The first streltsy units were created by Ivan the Terrible sometime between 1545 and 1550 and armed with the arquebus. They first saw combat at the Siege of Kazan in 1552. Military service in this unit became lifelong and hereditary. The bearded strelsty were organized into regiments, each with a long coat (kaftans) and pointed cloth hat of a distinctive colour. By 1680 there were 20 regiments of Moscow streltsy totaling 20,048 men and comprising about 12 per cent of the total army[7] (along with cossacks, militia and an increasing number of regular soldiers). In addition there were significant numbers of frontier and garrison streltsy serving outside Moscow, although these were less formally drilled and equipped.

The Muscovite government was chronically short of cash so that the streltsy were often not paid well. While "entitled" to something like four rubles a year in the 1550s, they were often allowed to farm or trade in order to supplement their incomes. Textiles for clothing and foodstuffs were sometimes issued as part of their pay. A commander of one hundred musketeers (sotnik) received up to 20 roubles a year and a regimental head (streletski golova) between 30 and 60.[8]

In the late 17th century, the Streltsy of Moscow began to actively participate in a struggle for power between different government groups, supporting the dissidents and showing hostility towards any foreign innovations.

After the fall of Sophia Alekseyevna in 1689, the government of Peter the Great engaged in a process of gradual limitation of the streltsy’s military and political influence. In order to counter their power Peter began to raise a new regular army, still armed with muskets but disciplined, uniformed and organised along West European lines. In spite of these measures, the streltsy revolted yet again while Peter was on his Great Embassy in Europe. The four regiments involved were disbanded and 1,200 of the mutineers were executed. The remainder were exiled, had their property confiscated and were banned from future military employment.[9] The entire corps was technically abolished in 1689; however, after having suffered a defeat at Narva in 1700, the government retained some streltsy units in service.

The Preobrazhensky and Izmailovsky regiments of Imperial Guards replaced the streltsy as the tsar's bodyguards. 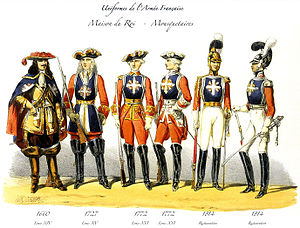 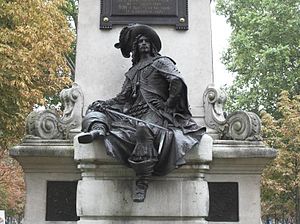 The Musketeers of the Guard were a junior unit, initially of roughly company strength, of the military branch of the Royal Household or Maison du Roi. They were created in 1622 when Louis XIII furnished a company of light cavalry (the "carabiniers", created by Louis' father Henry IV) with muskets. Musketeers fought in battle both on foot as infantry and on horseback as dragoons.[10] At the Battle of Fontenoy in 1745 the King's Musketeers served as regular cavalry, charging British infantry with drawn swords.

As one of the less senior units in the Royal Guard, the Musketeers were not closely linked to the royal family. Traditional bodyguard duties were in fact performed by the Garde du Corps and the Cent-suisses. Because of its later establishment, the Musketeers were open to the lower classes of French nobility or younger sons from noble families whose oldest sons served in the more prestigious Garde du Corps and Cheavau-legers (Light Horse). The Musketeers soon gained a reputation for boisterousness and fighting spirit because the only way for social and career advancement was excelling at their task as mounted light dragoons.

Their high esprit de corps gained royal favor for the Musketeers and they were frequently seen at court and in Paris. Shortly after their creation, Cardinal Richelieu created a bodyguard unit for himself. So as not to offend the King with a perceived sense of self-importance, Richelieu did not name them Garde du Corps like the King's personal guards but rather Musketeers after the Kings' junior guard cavalry. This was the start of a bitter rivalry between the two corps of Musketeers. At the cardinal's death in 1642, the company passed to his successor Cardinal Mazarin. At Mazarin's death in 1661, the cardinal's Musketeers passed to Louis XIV to the disgust of both the King's Musketeers and the Cardinal's Musketeers. The Musketeers were subsequently reorganized as a guard cavalry regiment of two companies. The King's Musketeers became the first company, popularly known as "Grey Musketeers" (mousquetaires gris) while the Cardinal's Musketeers became the second company, known as "Black Musketeers" (mousquetaires noirs) for riding grey and black horses, respectively. From their establishment the Musketeers wore blue cloak-like cassocks, lined with red and edged with silver embroidery. From 1688 the cassocks were replaced by smaller soubrevestes or sleeveless coats in the same colours. In the early decades of the corps the musketeers had worn civilian dress under their cassocks, according to personal taste and means, but in 1677 a scarlet uniform was adopted.[11]

In terms of recruitment the Musketeers were among the most sought after of the military companies of the Ancien Régime. This was due to the lower entrance requirements. The senior guard units were in effect closed to all but the most senior and wealthy of French nobles, so for the majority of French nobles (many of whom lived in genteel poverty), service in the Musketeers was the only way to join a mounted unit in the Royal Household and perhaps catch the King's eye. Enlistment did however require both letters of recommendation and evidence that a recruit had the family means to support the costs of service. These included the provision of horses, swords, clothing, a servant and equipment. Only the muskets and the distinctive blue cassock were provided by the monarch.

Decades later, starting in 1844, this group was the subject of the now-famous serial publication The Three Musketeers, in the magazine Le Siècle between March and July 1844. The author, Alexandre Dumas, père, based his work on the book Mémoires de Monsieur d'Artagnan, capitaine lieutenant de la première compagnie des Mousquetaires du Roi (Memoirs of Mister d'Artagnan, lieutenant captain of the first company of the King's Musketeers) by Gatien de Courtilz de Sandras (Cologne, 1700).

Thanks to the reforms of Gustav II Adolf, the Swedish Army brought to maturity the new style of fighting that made Sweden into a great power in the 17th century. This style of fighting became the new standard throughout Europe and its colonies in the latter stages of musket dominated warfare. Manuals based on Gustav's own revolutionised the training and tactics of western armies. 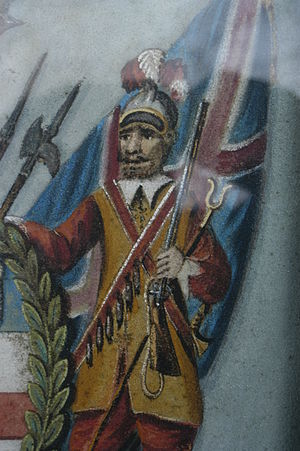 A heraldic supporter: a musketeer of the Honourable Artillery Company, in sand, 19th century

The iconic "Redcoat" of the British Empire was the staple unit in the British armies that created the largest empire in history. The British infantryman was equipped with the .75 calibre Land Pattern Musket, or Brown Bess. He was well trained by the standards of the time, training with live ammunition. A fully trained redcoat could fire four times a minute. This, combined with the technique of firing by companies (a method wherein blocks of men fired smaller volleys in succession, creating a wave of fire down the front of the regiment), made it possible for the British musketeer to win pitched battles against superior numbers.

The musket was withdrawn from service with the British Army in 1854, replaced by the muzzle-loading Minié rifle, which had an accurate range of over three times that of the Brown Bess which it replaced.[12]

This article is based in part on the article Mousquetaire from the French Wikipedia, retrieved on 9 September 2006.