Muslims in the United States military

Service by Muslims in the United States military dates back to the American Revolutionary War where records indicate that at least a few Muslims fought on the American side.[1]

Muslims have fought in all major US wars including the American Civil War, World War I, World War II, and the Vietnam War.[1] More recently they have served in Gulf War, Iraq War, and the War in Afghanistan.

On December 14, 1993, the Army Chief of Chaplains requested that an insignia be created to represent Muslim chaplains, and the design (a crescent) was completed January 8, 1993.[2]

In 2011 there were approximately 3500 American Muslims serving in the United States military.[3] 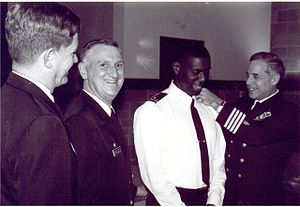 Records from the American Revolutionary War indicate that at least a few Muslims fought on the American side. Among the recorded names of American soldiers are "Yusuf ben Ali" and "Bampett Muhamed".[4]

Peter Salem was a notable African American who participated in the Revolutionary War. He played a particularly important role in the crucial Battle of Bunker Hill, in which he fatally shot British Marine Major John Pitcairn. Although there is no direct documentation of Salem's religious views, some scholars believe that he may have been Muslim.[5]

Two hundred and ninety-two Muslims are known to have fought during the Civil War.[1] The highest ranking Muslim officer during the War was Captain Moses Osman.[1] Nicholas Said, formerly enslaved to an Arab master, came to the United States in 1860 and he found a teaching job in Detroit. In 1863, Said enlisted in the 55th Massachusetts Colored Regiment in the United States Army and rose to the rank of sergeant. He was later granted a transfer to a military hospital, where he gained some knowledge of medicine. His Army records state that he died in Brownsville, Tennessee, in 1882.[6] Another Muslim soldier from the Civil War was Max Hassan, an African who worked for the military as a porter.[7]