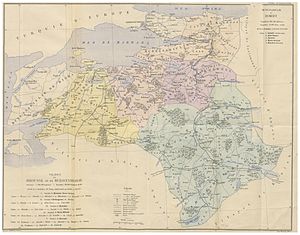 In the Ottoman Empire, a mutasarrıf was an administrative authority of any of certain sanjaks, who were appointed directly by the Sultan.[1] This administrative unit was sometimes independent (e.g., Mount Lebanon Mutasarrifate or Cyprus) and sometimes was part of a vilayet (province), administered by a vali, and contained nahiye (communes), each administered by a kaymakam.[2] This rank was established in 1864 against the new Law of Villayets instead of rank of mutesellim which was abolished in 1842.[3]

"This small political unit was governed by a non-Lebanese Ottoman Christian subject and given the protection of European powers. The religious communities of the district were represented by a council that dealt directly with the governor. This system provided peace and prosperity until its abolition."[4]

The mutassarifates of the Ottoman Empire included: