The film was one of the biggest hits of its time. Although its historical accuracy has been questioned (inevitable, as it is based on a novel about the facts, not the facts themselves), film critics consider this adaptation to be the best cinematic work inspired by the mutiny.

HMS Bounty leaves England in 1787 on a two-year voyage over the Pacific Ocean. The ship's captain, William Bligh (Charles Laughton), is a brutal tyrant who routinely administers harsh punishment to officers and crew alike who lack discipline, cause any infraction on board the ship, or in any manner defy his authority. Fletcher Christian (Clark Gable), the ship's lieutenant, is a formidable yet compassionate man who disapproves of Bligh's treatment of the crew. Roger Byam (Franchot Tone) is an idealistic midshipman who is divided between his loyalty to Bligh, owing to his family's naval tradition, and his friendship with Christian.

During the voyage, the enmity between Christian and Bligh grows after Christian openly challenges Bligh's unjust practices aboard the ship. When the ship arrives at the island of Tahiti, where the crew acquires breadfruit plants to take home, Bligh punishes Christian by refusing to let him leave the ship during their stay. Byam, meanwhile, sets up residency on the island, living with the island chief, Hitihiti (William Bambridge), and his daughter, Tehani (Movita Castaneda), and compiling an English dictionary of the Tahitian language. Hitihiti persuades Bligh to allow Christian a day pass on the island. Bligh agrees but quickly repeals the pass out of spite. Christian disregards the order and spends his one day off the ship romancing a Tahitian girl, Maimiti (Mamo Clark). Christian promises her he will be back someday.

After leaving Tahiti the crew begins to talk of mutiny after Bligh's harsh discipline leads to the death of the ship's beloved surgeon, Mr. Bacchus (Dudley Digges), and Bligh cuts water rationing to the crew in favor of providing water for the breadfruit plants. Christian, although initially opposing the idea, decides he can no longer tolerate Bligh's brutality when he witnesses crew members shackled in iron chains, and he approves the mutiny. The crew raids the weapons cabinet and seizes the ship. Bligh and his loyalists are cast into a boat and set adrift at sea with a map and rations to ensure their survival. Due to Bligh's steady leadership, they are able to find their way back to land.

Meanwhile, Christian orders that Bounty return to Tahiti. Byam, who was in his cabin during the mutiny, disapproves of what Christian has done and decides the two can no longer be friends. Months later, Byam is married to Tehani and Christian has married Maimiti and has a child with her, while the rest of the crew are enjoying their freedom on the island. After a long estrangement, Byam and Christian reconcile their friendship. However, when the British ship HMS Pandora is spotted approaching, Byam and Christian decide they must part ways. Byam and several crew members remain on the island for the ship to take them back to England, while Christian leads the remaining crew, his wife and several Tahitian men and women back on board Bounty in search of a new island on which to seek refuge.

Byam boards the Pandora and, much to his surprise, discovers that Bligh is the captain. Bligh, who suspects that Byam was complicit in the mutiny, has him imprisoned for the remainder of the journey across the sea. Back in England Byam is court-martialed and found guilty of mutiny. Before the court condemns him, Byam speaks of Bligh's cruel, dehumanising conduct aboard Bounty. Due to the intervention of his friend Sir Joseph Banks (Henry Stephenson) and Lord Hood (David Torrence), Byam is pardoned by King George III and allowed to resume his naval career at sea.

Meanwhile, Christian has found Pitcairn, an uninhabited yet sustainable island that he believes will provide adequate refuge from the reach of the Royal Navy. After Bounty crashes on the rocks, Christian orders her to be burned. 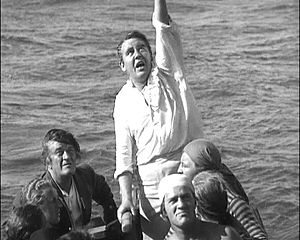 The movie contains several historical inaccuracies. Captain Bligh was never on board HMS Pandora, nor was he present at the trial of the mutineers who stayed on Tahiti. At the time he was halfway around the world on a second voyage for breadfruit plants. Fletcher Christian's father had died many years before Christian's travels on board Bounty, whereas the film shows the elder Christian at the trial. It should be noted, though, that the movie was always presented as an adaptation of the Nordhoff and Hall trilogy, which already differed from the actual story of the mutiny.

Bligh is depicted as a brutal, sadistic disciplinarian. Particular episodes include a keelhauling and flogging a dead man. Neither of these happened. Keelhauling was used rarely, if at all, and had been abandoned long before Bligh's time. Indeed, the meticulous record of Bounty's log reveals that the flogging rate was lower than the average for that time. Prior to the mutiny, Bounty had only two deaths—one seaman died of scurvy (not keelhauling), and the ship's surgeon died apparently of drink and indolence and not as a result of abuse by Bligh. Likewise, the film shows the mutineers taking over the ship only after killing several loyal crewmen, when in fact none died (although one crewman came very close to shooting Bligh until stopped by Christian). Lastly, Christian is shown being inspired to take over the ship after several crewmen have unjustly been put into irons by Bligh; this is fictional license.

For historical accuracy, Clark Gable reluctantly had to shave off his famous moustache because the sailors in the Royal Navy in the 18th century had to be clean-shaven.

In the final scene of the film, Gable gives a rousing speech to his fellow mutineers, speaking of creating a perfect society of free men on Pitcairn, away from Bligh and the navy. The reality was very different.

Midshipman Roger Byam was based on a real person, Midshipman Peter Heywood, who is not listed in the novel or motion picture. Just as the fictional Byam is pardoned at the end of the film, the real-life Peter Heywood was pardoned for his part in the mutiny. MGM trailers in 1935 made an error calling Midshipman Byam an ensign.

Mutineer Thomas Ellison is depicted as being allowed to see his wife before his execution. There is no record to indicate that the real Ellison was married, and in any case a consolation visit of this type never would have been permitted in real life. 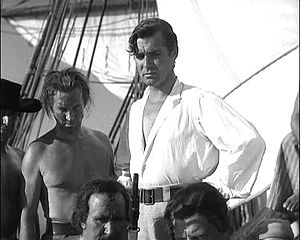 James Cagney (then on a hiatus from Warner Bros. during a contract dispute) and future stars David Niven and Dick Haymes were uncredited extras in the movie. Cagney is clearly visible toward the beginning of the film. He was sailing his boat near where the film was shooting near Catalina Island; director Frank Lloyd was an old friend of his, and Cagney asked him if he could play a small part in the film, saying, jokingly, "I need the money". Lloyd had Cagney dressed in a crewman's clothes and put him in the background of a few scenes.

Charles Laughton, who had a severe self-image complex concerning his weight and unattractive looks, suffered horribly in comparing himself to the handsome, masculine Clark Gable.[4] Laughton would constantly watch his own walk, gestures and face, making sure not to let his complex be projected.[4]

A British merchant navy officer[5] recalled in his memoirs seeing the fore and aft-rigged schooner Commodore II being broken up in Cape Town in 1945, having suffered severe gale damage, and that this was the ship that had been re-rigged for the film.

Contemporary reviews were very positive. Andre Sennwald of The New York Times wrote, "Grim, brutal, sturdily romantic, made out of horror and desperate courage, it is as savagely exciting and rousingly dramatic a photoplay as has come out of Hollywood in recent years. The Nordhoff-Hall trilogy was, of course, born to be filmed, and Metro-Goldwyn-Mayer has given it the kind of production a great story deserves."[6] The Hollywood Reporter raved that it was "one of the greatest films of all time", with "the epic sweep of the sea itself."[7] Variety called it "Hollywood at its very best. The story certainly could not have been presented as powerfully through any other medium."[8] Film Daily wrote, "This is one of the most important productions since the inception of talking pictures. It is grim, gripping and pictorially perfect."[9] John Mosher of The New Yorker declared that the filmmakers had "done a good, solid, fine job" and wrote that Laughton's performance as Captain Bligh "may not be exactly the image of the original brute, but it's a Laughton masterpiece."[10] Mutiny on the Bounty topped the annual Film Daily poll of 523 critics as the best film of 1936 (it was released too late in the year to appear on the 1935 ballot).[11][12]

This film is, as of 2015, the last Best Picture winner to win in no other category (following The Broadway Melody and Grand Hotel). It is the only film to have three Best Actor nominations.

In 1940 Frank Lloyd was reported as wanting to make a film about the life of Captain Bligh starring Spencer Tracy or Charles Laughton, at Universal. It was never made[13]

In 1945 it was reported that MGM would make a sequel with Gable, Christian of the Bounty. It would be based on a novel by Charles Nordhoff about Christian's romantic adventures in England and South America following the colonization of Pitcairn Island and would be produced by Carey Wilson.[14] It was never made.

A 1962 three-hour-plus widescreen Technicolor remake, starring Marlon Brando as Fletcher Christian and Trevor Howard as Capt. Bligh, was a disaster both critically and financially at the time, but has come to be re-evaluated by some critics.

In 1984 Mel Gibson played Christian opposite Anthony Hopkins as Bligh in a film (based not upon the Nordhoff-Hall novels but on an historical work by Richard Hough) called The Bounty. This latest version, which gives a far more sympathetic view of Bligh, is considered to be the closest to historical events.

The 1935 version was itself not the first film account of the mutiny. In 1933 an Australian film entitled In the Wake of the Bounty, with the then-unknown Errol Flynn as Fletcher Christian, was released, but was not successful and received few bookings outside Australia. There was also an even earlier film, the 1916 Australian–New Zealand film, The Mutiny on the Bounty directed by Raymond Longford.