From Infogalactic: the planetary knowledge core
Jump to: navigation, search
For other uses, see Mykonos (disambiguation).
Not to be confused with Mykines.

Mykonos (/ˈmɪkəˌnɒs/, /ˈmɪkəˌnoʊs/;[1] Greek: Μύκονος [ˈmikonos]) is a Greek island, part of the Cyclades, lying between Tinos, Syros, Paros and Naxos. The island spans an area of 85.5 square kilometres (33.0 sq mi) and rises to an elevation of 341 metres (1,119 feet) at its highest point. There are 10,134 inhabitants (2011 census), most of whom live in the largest town, Mykonos, which lies on the west coast. The town is also known as Chora (i.e. the Town in Greek, following the common practice in Greece when the name of the island itself is the same as the name of the principal town).

Archaeological findings suggest the presence of the Neolithic tribe Kares on the island in 3000 BC, but the first real settlers seem to be the Ionians from Athens in the early 11th century BC. There were many people living on the neighbouring island of Delos, just 2 km (1.2 miles) away, which meant that Mykonos became an important place for supplies and transit. It was, however, during ancient times a rather poor island with limited agricultural resources and only two towns. Its inhabitants were pantheists and worshipped many gods.[8] 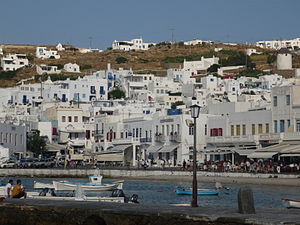 Mykonos came under the control of the Romans during the reign of the great Roman Empire and then became part of the Byzantine Empire until the 12th century. In 1204, with the fall of Constantinople in the Fourth Crusade, Mykonos was occupied by Andrea Ghisi, a relative of the Doge of Venice. The island was ravaged by the Catalans at the end of the 13th century and finally given over to direct Venetian rule in 1390.

In 1537, while the Venetians still reigned, Mykonos was attacked by Hayreddin Barbarossa, the infamous admiral of Suleiman the Magnificent, and an Ottoman fleet established itself on the island. The Ottomans, under the leadership of Kapudan Pasha, imposed a system of self-governance comprising a governor and an appointed council of syndics. When the castle of Tinos fell to the Ottomans in 1718, the last of the Venetians withdrew from the region.

Up until the end of the 18th century, Mykonos prospered as a trading centre, attracting many immigrants from nearby islands, in addition to regular pirate raids. In June 1794 the Battle of Mykonos was fought between British and French ships in the island's main harbour. 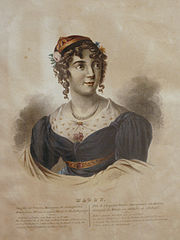 Portrait of Manto Mavrogenous at the Aegean Maritime Museum in Mykonos

The Greek Revolution against the Ottoman Empire broke out in 1821 and Mykonos played an important role, led by the national heroine, Manto Mavrogenous. Mavrogenous, a well-educated aristocrat guided by the ideas of the Enlightenment, sacrificed her family's fortune for the Greek cause. Greece became an independent state in 1830. A statue of her sits in the middle of Mando Mavrogenous square in the main town.

As a result of sailing and merchant activity, the island's economy quickly picked up but declined again during the late 19th century and especially after the opening of the Corinth Canal in 1904 and the First World War at the beginning of the 20th century. Many Mykonians left the island to find work in mainland Greece and many foreign countries, especially the United States.[9]

Tourism soon came to dominate the local economy, owing a lot to the important excavations carried out by the French School of Archaeology, which began work in Delos in 1873.

In the 1930s many famous artists, politicians and wealthy Europeans began spending their vacations on the island and Mykonos quickly became an international hot spot. Temporarily suspended during the Second World War, tourists once again rushed to Mykonos' luxurious shores in the 1950s and have not stopped since.

In Greek mythology, the Mykonos was named after its first ruler, Mykons, the son or grandson of the god Apollo and a local hero. The island is also said to have been the location of a great battle between Zeus and Titans and where Hercules killed the invincible giants having lured them from the protection of Mount Olympus. It is even said that the large rocks all over the island are the petrified testicles (or, in bowdlerized versions of the myth, the entire corpses) of the giants; this portion of the myth is the source of the slang term "stones" attested in most major European languages.[10] 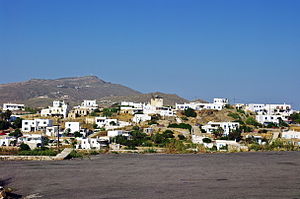 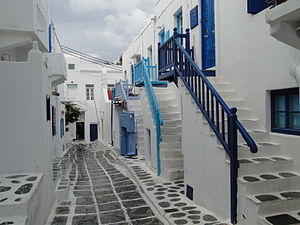 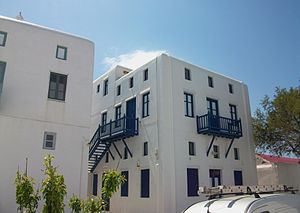 The island spans an area of 85.5 square kilometres (33.0 sq mi) and rises to an elevation of 341 metres (1,119 feet) at its highest point. It is situated 150 kilometres (93 miles) east of Athens in the Aegean Sea. The island features no rivers, but numerous seasonal streams two of which have been converted into reservoirs.

The island is composed mostly of granite and the terrain is very rocky with many areas eroded by the strong winds. High quality clay and baryte, which is a mineral used as a lubricant in oil drilling, were mined on the eastern side of Mykonos until the late 1900s.

It produces 4,500 cubic metres (160,000 cu ft) of water daily, by reverse osmosis of sea water in order to help meet the needs of its population and visitors.[11]

The sun shines for up to 300 days a year. It rains between February and March. This arid climate produces sparse vegetation.[citation needed] Vegetation grows around the beginning of winter and ends in mid-summer.[13]

There are two seasonal winds in Mykonos. The one in winter arrives from the south and is sometimes accompanied by electrical storms. The Sirocco, a famous southern wind, carries sands from the deserts that border the Mediterranean.[citation needed] In the summer a cooling wind comes from the north, the Meltemi, during July and August.

There are ten villages: 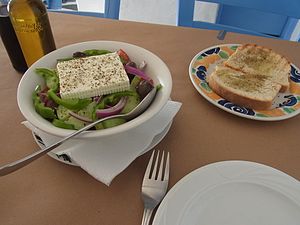 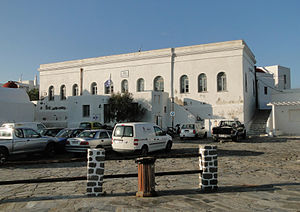 In the 2012 elections, the centre right New Democracy obtained the highest vote on Mykonos followed by the Coalition of the Radical Left (SYRIZA).[15]

There are 10,134 inhabitants (2011) most of whom live in the largest town, Mykonos, also known as Chora (i.e. the Town in Greek, a common denomination in Greece when the name of the island itself is the same as the name of the principal town).[citation needed]

Being an Greek island, the economy of Mykonos, has close relation with the sea. However, with the rise of tourism, it plays a minor role during summer.[16] 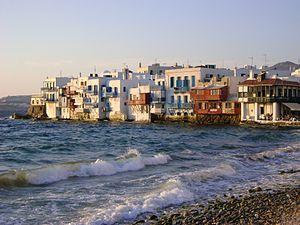 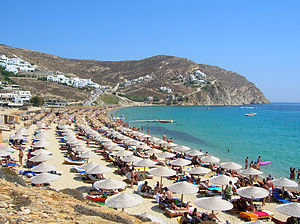 The original Neoclassical building underwent refurbishments and expansions in the 1930s and 1960s and the large eastern room was added in 1972. The museum contains artefacts from the neighbouring island Rhenia, including 9th- to 8th-century BC ceramic pottery from the Cyclades and 7th- to 6th-century BC works from other areas in the Aegean. Its most famous item is the large vase produced in Tinos, showing scenes from the fall of Troy.[24] 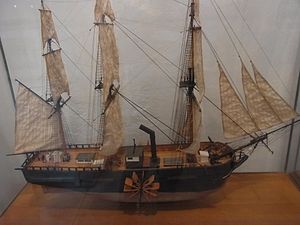 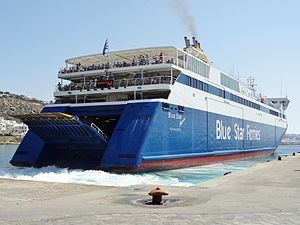 Mykonos Airport is located 4 kilometres (2.5 mi) southeast of the town of Mykonos and it is served by international flights during summer. The flight from Athens to Mykonos is 25 minutes.[31]

Mykonos is also accessible by boat and ferries. High speed vessels travel there daily from the surrounding islands and from Athens.[32]

Taxis, buses or boats are available for transportation. There are three main bus depots in Mykonos. The northern one is situated behind Remezzo Club above the old Port and provides regular service to Ano Mera, Elia and Kalafatis. A few hundred meters below, at the Old Port, lays another Depot focusing on the northern destinations of Tourlos (New Port) and Agios Stefanos. The southern Bus Depot is at the town "entrance", called Fabrika and it provides regular service to Ornos, Agios Yannis, Plati Gialos, Psarou, Paraga, and Paradise Beach. Small boats travel to and from the many beaches.[33] Tour boats go regularly to the nearby island of Delos.[34]