Mystras (Greek: Μυστράς, Μυζηθράς, Myzithras in the Chronicle of the Morea) is a fortified town and a former municipality in Laconia, Peloponnese, Greece. Since the 2011 local government reform it is part of the municipality Sparti, of which it is a municipal unit.[2] Situated on Mt. Taygetos, near ancient Sparta, it served as the capital of the Byzantine Despotate of the Morea in the 14th and 15th centuries, experiencing a period of prosperity and cultural flowering. The site remained inhabited throughout the Ottoman period, when it was mistaken by Western travellers for ancient Sparta. In the 1830s, it was abandoned and the new town of Sparti was built, approximately eight kilometres to the east. 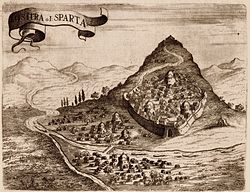 In 1261, the Latins ceded Mystras and other forts in the southeastern Peloponnese as ransom for William II, who had been captured in Pelagonia, and Michael VIII Palaeologus made the city the seat of the new Despotate of the Morea. It remained the capital of the despotate, ruled by relatives of the Byzantine emperor, although the Venetians still controlled the coast and the islands. Mystras and the rest of Morea became relatively prosperous after 1261, compared to the rest of the empire. Under the despot Theodore it became the second most important city in the empire after Constantinople, and William II's palace became the second residence of the emperors. The main church of Brontochion Monastery was completed around 1310.

The frescos in the Peribleptos Monastery Church, dating between 1348 and 1380, are a very rare surviving late Byzantine cycle, crucial for the understanding of Byzantine art.

Mystras was also the last centre of Byzantine scholarship; the Neoplatonist philosopher George Gemistos Plethon lived there until his death in 1452. He and other scholars based in Mystras influenced the Italian Renaissance, especially after he accompanied the emperor John VIII Palaiologos to Florence in 1439.

The last Byzantine emperor, Constantine XI Palaiologos, was despot at Mystras before he came to the throne. Demetrius Palaeologus the last despot of Morea, surrendered the city to the Ottoman emperor Mehmed II in 1460. As Mezistre, it was the seat of a Turkish sanjak. The Venetians occupied it from 1687 to 1715, but otherwise the Ottomans held it until 1821 and the beginning of the Greek War of Independence. It was abandoned under King Otto for the newly rebuilt town of Sparta.

In 1989 the ruins, including the fortress, palace, churches, and monasteries, were named a UNESCO World Heritage Site.

Mystras is situated on the slopes of Taygetos Mountain. The archaeological site stands above the modern village of Mystras and the city of Sparta. The greenery surrounding the area is composed mainly by pine trees and cypresses. Some small rivers and lakes are found in the region. [3]

The municipal unit Mystras is subdivided into the following communities:

The municipality seat of Mystras is in Magoula. 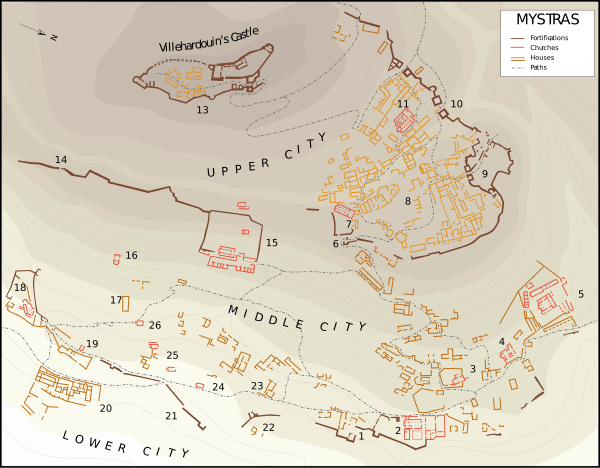