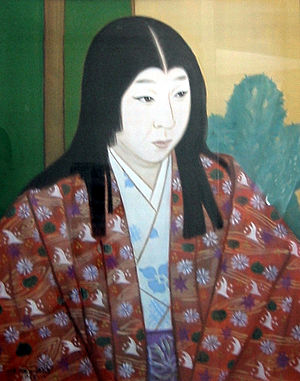 Portrait of Nō in Gifu Castle

Lady Nō (濃姫?) also Kichō (帰蝶) ("hime" means lady, princess, woman of noble family), was the wife of Oda Nobunaga, a major daimyo during the Sengoku period of Japanese history. Her proper name was Kichō, but since she came from Mino Province, she is most commonly referred to as Nōhime (Lady of Mino). She was renowned for her beauty and cleverness.

Nōhime's father was the daimyo Saitō Dōsan and her mother was known as Omi no Kata. Nō herself appears very little in any historical record, and there is not a lot of information on the dates of her birth or death; however, proposed dates for her birth fall between 1533–1535. 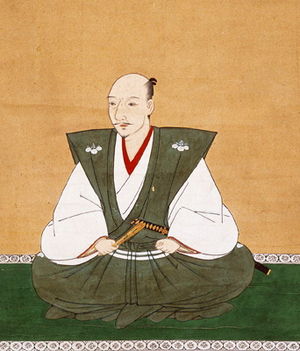 Nō was said to be extremely intelligent and stunningly beautiful. At their wedding, Nobunaga described her as having "the mind of a genius and the appearance of a goddess." She was married to him in 1549, during a truce between his father, Nobuhide, and Saitō Dōsan.

The marriage was a political gesture and many believe there was little love between Nō and Nobunaga. Though she was the official wife of Oda Nobunaga, it is often believed that he focused his love on his concubine, Kitsuno, who bore him his first son, Nobutada. Nō was never able to conceive a child with Nobunaga and it was believed that she was barren. Three years after the Honnō-ji Rebellion and Nobunaga's death, one of his sons gave money to Nō.

Through lack of historical record there is not much information of what became of Nō or even the date of her death. Overall, it can be said that Nō's life as it is known now is more of a mixture of legends, folktales, and tentative half-truths. Nō's grave can be found at Sōken-in (総見院), a subtemple of Daitoku-ji in Kyoto.

It was alleged that Nō was acting as a spy, or even assassin, for her father; at that time it was not an uncommon practice for a wife to relay information to her maiden family. Given Nobunaga's reputation at the time as the unruly "Fool of Owari" (Owari no Utsuke 尾張の虚け), it was also not impossible for Dōsan to want Nō to assassinate him as she was skilled in both the sword and a selection of martial arts.

As for her alleged role as a spy, there is a popular story where Nobunaga purposely gave Nō false information regarding a conspiracy between two of her father's head servants and their plans to betray the Saitō. Her father had both the men executed and thus weakened himself by eliminating those loyal to him.

In 1556, Saitō Dōsan, Nō's father, was killed in a coup in Mino Province. This detracted much from Nō's worth as a wife. Her inability to conceive and her supposed spying were held against her.

After the Incident at Honnō-ji which claimed the lives of Nobunaga and Nobutada, it was uncertain where Nō went. Some speculate that she died at Honnō-ji, but the woman alleged to be Nō was more often believed to be a dormant prostitute who Oda Nobunaga had taken a liking to. Nevertheless, after the incident, Nobunaga's wives and female servants were all sent to Azuchi Castle, which was Nobunaga's castle of residence. Among the women was a Lady Azuchi (安土殿 Azuchi dono), who was taken in by Oda Nobukatsu. This Lady Azuchi is widely believed to have been Nō in disguise as she soon after disappeared from Azuchi Castle in the night.

Afterwards, it was often rumoured that she had attempted to raise her father's clan in Mino under her name. But this rumour also says that Nō had been killed by an assassin sent by the Akechi who had been tracking her down since her escape from Honnō-ji.

See People of the Sengoku period in popular culture.