n-vector is a three parameter non-singular horizontal position representation well-suited for replacing latitude and longitude in mathematical calculations and computer algorithms. Geometrically, it is a unit vector that is normal to the reference ellipsoid. The vector is decomposed in an Earth centered earth fixed coordinate system. It behaves the same at all Earth positions, and it holds the mathematical one-to-one property.

A normal vector to a strictly convex surface can be used to uniquely define a surface position. n-vector is an outward-pointing normal vector with unit length used as a position representation. [1]

For most applications the surface is the reference ellipsoid of the Earth, and thus n-vector is used to represent a horizontal position. Hence, the angle between n-vector and the equatorial plane corresponds to geodetic latitude, as shown in the figure. 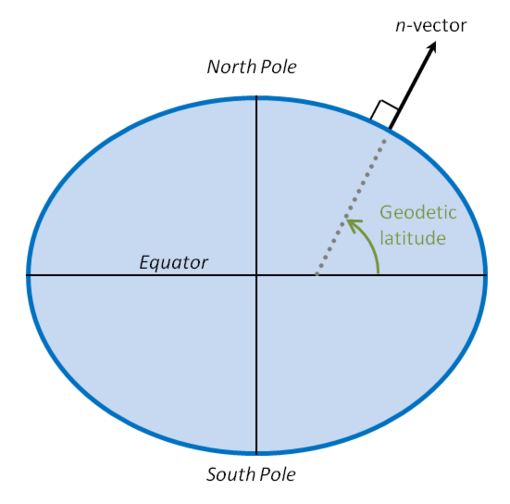 The direction of n-vector corresponds to geodetic latitude

Based on the definition of the ECEF coordinate system, it is clear that going from latitude/longitude to n-vector, is achieved by:

The superscript e means that n-vector is decomposed in the coordinate system e (i.e. the first component is the scalar projection of n-vector onto the x-axis of e, the second onto the y-axis of e etc.). Note that the equation is exact both for spherical and ellipsoidal Earth model.

From the three components of n-vector,

, latitude can be found by using:

The rightmost expression is best suited for computer program implementation.[1]

should be implemented using a call to atan2(y,x). The Pole singularity of longitude is evident as atan2(0,0) is undefined. Note that the equations are exact both for spherical and ellipsoidal Earth model.

Solving the same problem using n-vector is simpler due to the possibility of using vector algebra. The arccos expression is achieved from the dot product, while the magnitude of the cross product gives the arcsin expression. Combining the two gives the arctan expression:[1]

are the n-vectors representing the two positions a and b.

is the angular difference, and thus the great-circle distance is achieved by multiplying with the Earth radius. This expression also works at the poles and at the ±180° meridian. Note that arctan must be replaced by atan2 in computer program implementation.

There are several other examples where the use of vector algebra simplifies standard problems.[1] For a general comparison of the various representations, see the horizontal position representations page.