NBCUniversal (colloquially referred to as NBCU or NBCUni) is an American media and entertainment company engaged in the production and marketing of entertainment, news, and information products and services to a global customer base. The company owns and operates American television networks, numerous cable channels, and a group of local stations in the United States, as well as motion picture companies, several television production companies, and branded theme parks. It is the world's largest mass media group.

NBC Universal was formed on May 12, 2004 by the merger of General Electric's National Broadcasting Company with Vivendi's Vivendi Universal Entertainment.[8][9] GE and US cable TV operator Comcast announced a buyout agreement for the company on December 3, 2009. Following regulatory approvals, the transaction completed on January 28, 2011. Comcast subsequently owned 51% of NBCUniversal while GE owned 49%.[9][10][11] Comcast intended to buy out the rest of GE's stake over the following seven years, but nothing happened until February 12, 2013, when Comcast announced its intention to complete the purchase all at once and assume 100% ownership of the company by the end of March.[12][13] The deal was finalized on March 19, 2013.[14]

Originally, the NBC Universal logo was a combination of the NBC peacock logo and the Universal Studios globe and text. The logo was redesigned by Wolff Olins on January 31, 2011 to reflect the new Comcast ownership[15] and the unity of its two main divisions.[12]

NBCUniversal is headquartered in Rockefeller Plaza's Comcast Building (formerly the GE Building) in Midtown Manhattan, New York City.[16] The company is one of two successor companies to MCA Inc. (Music Corporation of America), the other being Vivendi through its subsidiary Universal Music Group.

NBC Universal Television has its modern roots in a series of expansions undertaken by NBC. In the late 1980s, NBC began pursuing a strategy of diversification, including the formation of two NBC-owned cable-television networks: CNBC and America's Talking. NBC also had partial ownership of several regional sports channels and other cable channels such as American Movie Classics and Court TV (until 2006).

In 1999, NBC took a 32% stake in the Paxson group, operator of PAX TV. Five years later, NBC decided to sell its interest in PAX TV and end its relationship with PAX owner, Paxson Communications.[17]

In 2003, amid a major financial crisis caused by over-expansion, Universal Studios' parent company, Vivendi Universal Entertainment (a division of Vivendi), decided to sell an 80% stake to NBC's parent company, General Electric. The sale and resulting merger formed NBC Universal. The new company was 80% owned by GE, and 20% owned by Vivendi.[8] The joint venture encompassed Vivendi's US film interests (such as Universal Studios), production and distribution units, as well as five theme parks, cable television channels including USA Network, Sci-Fi Channel, the defunct Trio, Cloo (formerly Sleuth), as well as 50% stakes in Canal+ and StudioCanal (with Vivendi owning the rest). Universal Music Group was not included in the deal and is not part of NBC Universal.[18]

On August 2, 2004, the television divisions of NBC and Universal Television were combined to form NBC Universal Television. NBC Studios series bought into the company include the NBC dramas Las Vegas (with DreamWorks SKG), Crossing Jordan, and American Dreams. Universal Network Television bought the Law & Order franchise and The District—in fact, Universal Network Television had co-produced American Dreams with NBC before the merger. Entertainment shows produced by the new group include The Tonight Show with Jay Leno, Late Night with Jimmy Fallon, Last Call with Carson Daly, and Saturday Night Live.

The formation of NBC Universal saw the establishment of NBC Universal Cable, which oversees the distribution, marketing, and advertisement sales for thirteen channels (Bravo, Bravo HD+ (eventually renamed Universal HD), Chiller, CNBC, CNBC World, MSNBC, mun2, Syfy, ShopNBC (which became ShopHQ after NBCUniversal sold its stake in the network), Telemundo, Cloo, USA Network and the Olympic Games on cable). NBC Universal Cable also manages the company's investments in The Weather Channel and TiVo. The cable division also used to operate NBC Weather Plus until 2008. It also owned a 50% stake in Canal+ and also owned a 15% stake in A+E Networks until 2012.[19] 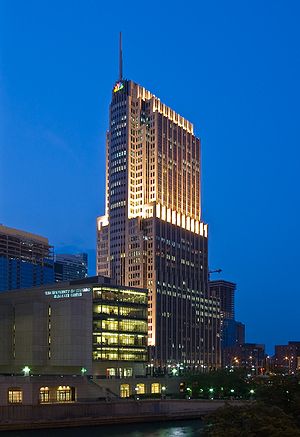 In the early 1990s, NBC began its expansion throughout Europe by creating CNBC Europe and its long-time successful NBC Europe Superstation by broadcasting NBC Giga throughout Germany and the rest of the European Union. NBC Europe helped to develop the Leipzig-based Games Convention, the largest European video game exposition with more than 100,000 visitors each year.

In January 2006, NBC Universal launched a new cable channel, Sleuth. The channel's programming dedicated to mystery/crime genre. Sleuth Network's initial slogan was "Mystery. Crime. All The Time." In early 2008, the channel unveiled a new slogan, "Get Clued In." On August 15, 2011, Sleuth rebranded as Cloo, in order to be able to trademark and own the name, as NBCUniversal cannot so with the name Clue (as Hasbro owns the rights to it with their board game Clue). NBCUniversal also explained that another reason for the name change was the word "Sleuth" is too common for search engines (a Google search brings up over 9,530,000 results).[21][22]

One year later after Sleuth's debut, NBC Universal announced that the company would launch a horror-themed cable channel, Chiller, on March 1, 2007. At launch Chiller would be available exclusively on DIRECTV. The network would feature films like Psycho and The Shining and TV series that include Twin Peaks, Alfred Hitchcock Presents, Freddy's Nightmares, Friday the 13th: The Series, War of the Worlds and Tales from the Crypt. NBC Universal also stated that, aside from the content in their own vaults, Chiller will feature content from other studios as well. In 2009, Chiller unveiled a new slogan, "scary good". This replaced the channel's previous slogan "Dare To Watch".

On June 14, 2007, NBC Universal Television Studio was renamed Universal Media Studios. The company explained that the reason for the name change was because "the new name fully describes the company's mission to be the premier content provider for television and digital platforms, spanning all television dayparts and creative genres."[23]

In August 2007, NBC Universal purchased Sparrowhawk Media Group and renamed it NBC Universal Global Networks. This acquisition gave NBC Universal all Hallmark channels outside the United States, plus the British channels: Diva TV, Movies 24, Hallmark Channel and the upcoming channel, KidsCo.[24] Later that fall, the company also acquired the Oxygen network in a separate $925 million deal.[25] The sale was completed one month later.

In the summer of 2008, NBC Universal, Blackstone Group and Bain Capital announced their intentions to buy The Weather Channel from Landmark Communications. The deal closed on September 12, 2008.[26] Shortly after the acquisition completed, NBC announced that their existing TV weather network, NBC Weather Plus, would be shut down by December 31, 2008.

On March 16, 2009, NBC Universal-owned cable channel Sci Fi announced that it would be changing its name to Syfy, replacing a generic term with a proprietary brand name that can be trademarked. The rebranding and name change took place on July 7, 2009.[30][31]

On August 27, 2009, A&E Television Networks (A&E) merged with Lifetime Entertainment Services (Lifetime),[32][33] giving NBC Universal an equal share of both Lifetime and A&E with The Walt Disney Company and Hearst.

On October 20, 2010, NBC Universal-owned horror/suspense-themed cable channel Chiller announced a major rebranding campaign incorporating a new logo and on-air look that launched on Wednesday, October 27, 2010.[34][35] To quote Syfy and Chiller President Dave Howe, "We have very ambitious plans to grow this network as a brand."[34][35]

Universal Studios became a part of NBC Universal as a result of the 2004 merger. In July 2008, NBCU had Universal Cable Productions split off from Universal Media Studios and moved into NBCUniversal's NBCU Cable Entertainment division.[36] 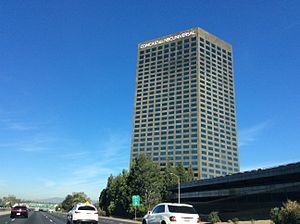 The same building in 2015 after Comcast acquired GE's remaining stake in NBC Universal. Notice the wordings on the top of the building changed.

On December 3, 2009, after months of rumors, a deal was formally announced in which Comcast would buy a stake in NBC Universal from GE.[10] Under the agreement, NBC Universal would be controlled with a 51% stake by Comcast and GE would retain the remaining 49%. Comcast paid $6.5 billion cash to GE. The deal includes a provision under which Comcast must contribute $7.5 billion in programming including regional sports networks and cable channels such as Golf Channel, Versus, and E! Entertainment Television. GE used some of the funds, $5.8 billion, to buy out Vivendi's 20% minority stake in NBC Universal.[10] Under the terms of the deal, Comcast reserves the right to buy out GE's share at certain times, and GE reserves the right to force the sale of their stake within the first seven years.[10][37] Vivendi completed the initial transaction on September 27, 2010, selling a $2 billion stake to GE (approximately 7.66%).[11]

U.S. regulators approved the proposed sale on January 18, 2011 with conditions. Comcast would have to give up NBC control over online video site Hulu, and ensure NBC Universal programming is available to competing cable operators.[38]

The corporation on July 19, 2012 formed the NBCUniversal News Group with the NBC News, CNBC, MSNBC, and The Weather Channel divisions.[42]