From Infogalactic: the planetary knowledge core
Jump to: navigation, search
This article is about the Japanese broadcaster. For other uses, see NHK (disambiguation).
Not to be confused with Nippon Broadcasting System. 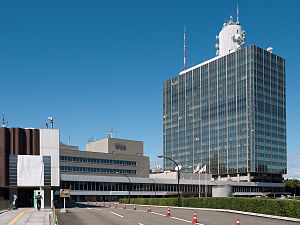 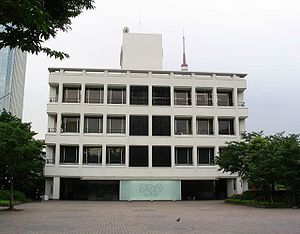 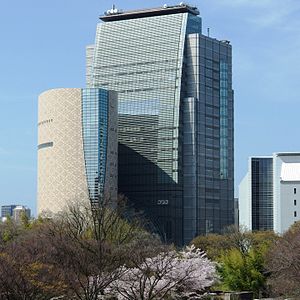 NHK (Japanese: 日本放送協会, Hepburn: Nippon Hōsō Kyōkai?, official English name: Japan Broadcasting Corporation) is Japan's national public broadcasting organization.[2] NHK, which has always identified itself to its audiences by the English pronunciation of its initials,[3] is a publicly owned corporation funded by viewers' payments of a television license fee.

NHK is an independent corporation chartered by the Japanese Broadcasting Act and primarily funded by license fees. NHK World broadcasting (for overseas viewers/listeners) is funded by the Japanese government. The annual budget of NHK is subject to review and approval by the Diet of Japan. The Diet also appoints the 12-member Board of Governors (経営委員会 keiei iinkai) that oversees NHK.

NHK is managed on a full-time basis by an Executive Board (理事会 rijikai) consisting of a President, Vice President and seven to ten Managing Directors who oversee various areas of NHK operations. The Executive Board reports to the Board of Governors.

NHK is funded by reception fees (受信料, jushinryō?), a system analogous to the license fee employed in some English-speaking countries. The Broadcast Law which governs NHK’s funding stipulates that any television equipped to receive NHK is required to pay. The fee is standardized,[4] with discounts for office workers and students who commute, as well a general discount for residents of Okinawa prefecture. For viewers making annual payments by credit card with no other special discounts, the reception fee is 13,600 yen per year for terrestrial reception only, and 24,090 yen per year for both terrestrial and broadcast satellite reception.[5]

However, the Broadcast Law lists no punitive actions for nonpayment; as a result of this, after a rash of NHK-related scandals, the number of people who had not paid the license fee surpassed one million users.[citation needed] This incident sparked debate over the fairness of the fee system.[6] In 2006, the NHK opted to take legal action against those most flagrantly in violation of the law.[7]

NHK General TV broadcasts a variety of programming. The following are noteworthy:

In his book Broadcasting politics in Japan:NHK and television news, ES Krauss states:' in the 1960s and 1970s, external critics of NHK news were complaining about the strict neutrality, the lack of criticism of government, and the 'self-regulation in covering events' ' Krauss claims that little had changed by the 1980s and 1990s.[8] After the Fukushima nuclear disaster in 2011 NHK was criticised for underplaying the dangers from radioactive contamination.[9][10]

Under the Broadcast Act, NHK is under the obligation to broadcast early warning emergency reporting in times of natural disasters such as earthquakes and tsunamis. Their national network of seismometers in cooperation with the Japan Meteorological Agency makes NHK capable of delivering the news in just 2–3 minutes after the quake. They also broadcast air attack warnings in the event of war, using the J-Alert system.[11] All warnings are broadcast in five languages: English, Mandarin, Korean and Portuguese (Japan has small Chinese, Korean and Brazilian populations), as well as Japanese. The warnings were broadcast in these languages during the 11 March 2011 earthquake and tsunami.[12]

The NHK Symphony Orchestra, financially sponsored by NHK, was formerly (until 1951) the Japanese Symphony Orchestra. Its website details the orchestra's history and ongoing concert programme.[14] Since 1953, NHK has broadcast the Kōhaku Uta Gassen song contest on New Year's Eve, ending shortly before Midnight.

NHK has become known for its documentary series, first for the popular mini-series Legacy for the Future, and later for the NHK Tokushu (later known as NHK Special) [15] documentaries series such as The Silk Road and The 20th Century on Film (映像の世紀, Eizō no Seiki?).

The longest running children’s show in Japan, Okaasan to Issho (おかあさんといっしょ?, With Mother, 1959 [16]), still airs to this day on NHK-ETV.

NHK's earliest forerunner was the Tokyo Broadcasting Station (東京放送局?) founded in 1924 under the leadership of Count Gotō Shinpei. Tokyo Broadcasting Station, along with separate organizations in Osaka and Nagoya, began radio broadcasts in 1925. The three stations merged under the first incarnation of NHK in August 1926.[17] NHK was modelled on the BBC of the United Kingdom,[3] and the merger and reorganisation was carried out under the auspices of the pre-war Ministry of Communications.[18] NHK's second radio network began in 1931, and the third radio network (FM) began in 1937.

NHK began shortwave broadcasting on an experimental basis in the 1930s, and began regular English and Japanese-language shortwave broadcasts in 1935 under the name Radio Japan, initially aimed at ethnic Japanese listeners in Hawaii and the west coast of North America. By the late 1930s NHK's overseas broadcasts were known as Radio Tokyo, which became an official name in 1941.

In November 1941, the Imperial Japanese Army nationalised all public news agencies and coordinated their efforts via the Information Liaison Confidential Committee.[citation needed] All published and broadcast news reports became official announcements of the Imperial Army General Headquarters in Tokyo for the duration of World War II. The famous Tokyo Rose wartime programs were broadcasts by NHK.[3] NHK also broadcast the Gyokuon-hōsō, the surrender speech made by Emperor Hirohito, in August 1945.

Following the war, in September 1945, the Allied occupation administration under General Douglas MacArthur banned all international broadcasting by NHK, and repurposed several NHK facilities and frequencies for use by the Far East Network (now American Forces Network). Japanese-American radio broadcaster Frank Shozo Baba joined NHK during this time and led an early postwar revamp of its programming. Radio Japan resumed overseas broadcasts in 1952.

NHK opened the first stage of its current headquarters in Shibuya, Tokyo as an international broadcasting center for the 1964 Summer Olympics, the first widely televised Olympic Games. The complex was gradually expanded through 1973, when it became the headquarters for NHK. The previous headquarters adjacent to Hibiya Park was redeveloped as the Hibiya City high-rise complex.

NHK began satellite broadcasting with the NHK BS 1 channel in 1984, followed by NHK BS 2 in 1985.[20] Both channels began regular broadcasts in 1989. In April 2011, BS 1 was rebranded while BS 2 channel ceased broadcasting and was replaced by "BS Premium" which broadcasts on the channel formerly used by BShi. Both channels currently air in HD.

International satellite broadcasts to North America and Europe began in 1995, which led to the launch of NHK World TV in 1998. It became free-to-air over the Astra 19.2°E (Astra 1L) and Eurobird satellites in Europe in 2008.[21]

NHK began digital television broadcasting in December 2000 through BS Digital, followed by terrestrial digital TV broadcasts in three major metropolitan areas in 2003. Its digital television coverage gradually expanded to cover almost all of Japan by July 2011, when analog transmissions were discontinued (except in certain areas affected by the 2011 Tōhoku earthquake and tsunami where it was discontinued in 2012).

In 2007, three employees of NHK were fined and fired for insider trading. They had profited by trading shares based on exclusive NHK knowledge.[23]

On 11 July 2008, NHK introduced a ban prohibiting stock trading by employees, numbering around 5,700, who had access to its internal news information management system. The employees were required to pledge in writing that they would not trade in stocks, and were required to gain approval from senior staff in order to sell shares they already held. NHK banned short-term stock trading completed in periods of six months or less for all other employees.[24]

The ban did not extend to employees' families, nor did NHK request any reports on their transactions.[23]

NHK has occasionally faced various criticisms regarding its treatment of Japan's wartime history.[25]

Katsuto Momii (籾井勝人), 21st head of NHK, caused controversy[26][27] by discussing Japan's actions in the Second World War at his first news conference after being appointed on December 20, 2013. It was reported that Momii said that NHK should support the Japanese government in its territorial dispute with China and South Korea.[28] He also caused controversy by playing down the issue of the enforced sexual slavery of the so-called comfort women by the Japanese military in World War Two by, according to the Taipei Times, stating "[South] Korea’s statements that Japan is the only nation that forced this are puzzling. ‘Give us money, compensate us,’ they say, but since all of this was resolved by the Japan-Korea peace treaty, why are they reviving this issue? It’s strange."[29] It was subsequently reported by the Japan Times that on his first day at NHK Momii asked members of the executive team to hand in their resignation on the grounds that they had all been appointed by his predecessor.[30]

At the end of April 2014, a number of Civil Society groups protested at Katsuto Momii's continuing tenure as Director General of NHK.[31] One of the groups, the Viewers' Community to Observe and Encourage NHK (NHKを監視・激励する視聴者コミュニティ?), issued a public letter asking for the resignation of Momii on the grounds that the remarks he made at his inaugural press conference were explosive. The letter states that if Momii does not resign by the end of April that its members would freeze their payments of the licence fee for a period of half a year.[32]

On 17 October 2014, The Times claimed to have received internal NHK documents which banned any reference to the Rape of Nanking, to Japan's use of wartime sex slaves during World War Two, and to its territorial dispute with China in its English-language broadcasting.[33]