NHS Scotland is the publicly funded healthcare system in Scotland. Health and social care policy and funding are the responsibility of the Health and Social Care Directorates of the Scottish Government. The current Cabinet Secretary for Health, Wellbeing and Sport is Shona Robison and the head of staff is the Director-General Health and Social Care and Chief Executive of NHSScotland, Paul Gray.[1]

Health and social care are devolved issues in the United Kingdom and the separate public healthcare bodies of Scotland, England and Wales are each commonly referred to as "National Health Service". The NHS in Scotland was created as an administratively separate organisation in 1948 under the ministerial oversight of the Scottish Office, before being politically devolved in 1999. This separation of powers and financing is not always apparent to the general public due to the co-ordination and co-operation where cross-border emergency care is involved.

Approximately 160,000 staff work across 14 regional NHS Boards, seven Special NHS Boards and one public health body,[3] More than 12,000 of these healthcare staff are engaged under independent contractor arrangements. Descriptions of staff numbers can be expressed as headcount and by Whole-Time Equivalent (WTE) which is an estimate that helps to take account of full and part-time work patterns.

The service was founded by the National Health Service (Scotland) Act 1947 (since repealed by the National Health Service (Scotland) Act 1978). This Act provided a uniform national structure for services which had previously been provided by a combination of the Highlands and Islands Medical Service, local government, charities and private organisations which in general was only free for emergency use. The new system was funded from central taxation and did not generally involve a charge at the time of use for services concerned with existing medical conditions or vaccinations carried out as a matter of general public health requirements; prescription charges were a later introduction in 1951.

Prior to the creation of Scotland's NHS in 1948, the state was involved with the provision of healthcare, though it was not universal. Half of Scotland’s landmass was already covered by the Highlands and Islands Medical Service, a state-funded health system run directly from Edinburgh, which had been set up 35 years earlier. In addition, there had been a substantial state-funded hospital building programme during the war years. Scotland also had its own distinctive medical tradition, centred on its medical schools rather than private practice, and a detailed plan for the future of health provision based on the Cathcart report.[8]

Current provision of healthcare is the responsibility of 14 geographically based local NHS Boards and 7 National Special Health Boards.

Proposals for the establishment of 15 NHS Boards were announced by the Scottish Executive Health Department in December 2000.[9] Further details about the role and function of the unified NHS health boards were provided in May 2001.[10] From 1 October 2001 each geographical Health Board area had a single NHS Board that was responsible for improving health and health services across their local area, replacing the previous decision-making structures of 43 separate boards and trusts.[11]

In April 2004, Scotland's health care system became an integrated service under the management of NHS Boards. Local authority nominees were added to Board membership to improve co-ordination of health and social care. The remaining 16 Trusts were dissolved from 1 April 2004.[12] Hospitals are now managed by the acute division of the NHS Board. Primary care services such as GPs and pharmacies would continue to be contracted through the NHS Board, but from 2004 were considered part of the remit of Community Health Partnerships (CHPs), structures based largely on local authority boundaries and including local authority membership of their Boards. By April 2014, there were new joint working arrangements in place between the NHS boards and Local Authorities came into effect that also included responsibility for social care. There new organisations, which took over from CHPs are called Health and Social Care Partnerships (HSCPs).

In January 2008, the Scottish Government announced plans for legislation to bring in direct elections as a way to select people for non-executive positions on Health Boards.[13] The Health committee of the Scottish Parliament had supported plans for directly elected members as a way that might improve public representation.[14]

Local Health Boards are supported by a number of non-geographical Special Health Boards providing national services(some of which have further publicised subdivisions), including:

Other subdivisions of the Scottish NHS include:-

The Central Register keeps records of patients resident in Scotland who have been registered with any of the health systems of the United Kingdom.[24] It is maintained by the Registrar General. Its purposes include keeping GPs' patient lists up to date, the control of new NHS numbers issued in Scotland and assisting with medical research.

Scottish patients are identified using a ten-digit number known as the CHI Number.[25] These are used to uniquely identify individuals, avoiding problems such as where health records of people with similar birth dates and names may be confused, or where ambiguously spelled or abbreviated names may lead to one patient having several different health records. In addition, CHI numbers are quoted in all clinical correspondence to ensure that there is no uncertainty over the patient in question. A similar system of NHS reference numbers has since been instituted by NHS England and Wales.

The Mental Welfare Commission for Scotland is an independent statutory body which protects people with a psychological disorder who are not able to look after their own interests. It is funded through the Scottish Government Health Department, and follows the same financial framework as the NHS in Scotland.

There are various regulatory bodies in Scotland, as is the case throughout the UK, both government-based (e.g., Scottish Government Health Directorates, Nursing and Midwifery Council) and non-governmental-based (e.g., General Medical Council, Academy of Medical Royal Colleges and Faculties in Scotland).

In 2000, the NHS boards were starting to help out researchers with their studies. The Scottish Dental Practice Board, for example, was helping out a study which looked at the significance of orthodontic treatment with fixed appliances. The SDPB shared 128 subjects with these researchers for analysis.[27] 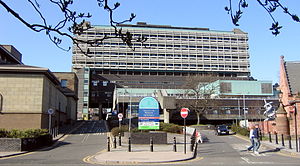 The Western Infirmary in Glasgow.

The SNP government, elected in May 2007, made it clear that it opposed the use of partnerships between the NHS and the private sector.[28] Health Secretary Nicola Sturgeon voiced opposition to what she termed the "creeping privatisation" of the NHS, and called an end to the use of public money to help the private sector "compete" with the NHS.[29]

In September 2008, the Scottish Government announced that parking charges at hospitals were to be abolished except 3 where the car parks were managed under a private finance initiative scheme:[30]

Prescription charges were abolished in Scotland in 2011.

It was agreed in August 2014 that GPs in Scotland would have a separate contract with negotiations taking place which would come into force from 2017/18. It is proposed that they should give up employing practice staff and move ‘as far towards salaried model as possible without losing independent status’.[31]

In 2014 the Nuffield Trust and the Health Foundation produced a report comparing the performance of the NHS in the four countries of the UK since devolution in 1999. They included data for the North East of England as an area more similar to the devolved areas than the rest of England. They found that there was little evidence that any one country was moving ahead of the others consistently across the available indicators of performance. There had been improvements in all four countries in life expectancy and in rates of mortality amenable to health care. Despite the hotly contested policy differences between the four countries there was little evidence, where there was comparable data, of any significant differences in outcomes. The authors also complained about the increasingly limited set of comparable data on the four health systems of the UK.[32]

Dr Peter Bennie, of the British Medical Association, attacked the decision to release weekly reports on the Accident and Emergency 4 hour wait target in June 2015. In June 2015 92.2% of patients were admitted or discharged within 4 hours against a target of 95%. He said "The publication of these weekly statistics completely misses the point and diverts attention from the real issues in our health service."[34]

The Academy of Medical Royal Colleges and Faculties in Scotland produced a report entitled “Learning from serious failings in care” in July 2015. The investigation was launched after concerns about high death rates and staffing problems at Monklands Hospital, a clostridium difficile outbreak at the Vale of Leven Hospital and concerns about patient safety and care at Aberdeen Royal Infirmary. The report found the problems had been predominantly caused by the failure of clinical staff and NHS management to work together.[35] They found leadership and accountability were often lacking but bullying was endemic Their 20 recommendations for improvements in the NHS included a set of minimum safe staffing levels for consultants, doctors, nurses and other staff in hospital settings. They criticised a target driven culture, saying: "Quality care must become the primary influence on patient experience... and the primary indicator of performance."[36]

The divergent administration of the NHS between England and Scotland has created problems for patients who live close to the border. The Coldstream medical practice has about 1400 patients who live in England. They benefit from the Scottish free prescriptions because they are "deemed to be in the Scottish healthcare system" so long as they are delivered through a Scottish pharmacy. However, there has been no agreement about the reimbursement of hospital charges for patients who cross the border for hospital treatment. In 2013 633 Northumberland patients crossed into Scotland for treatment at the Borders General Hospital.[37]

University College London Hospitals NHS Foundation Trust complained in June 2015 that commissioners outside England use a “burdensome” prior approval process, where a funding agreement is needed before each stage of treatment. At the end of 2014-15 the trust was owed more than £2.3m for treating patients from outside England. A survey by the Health Service Journal suggested there was £21m of outstanding debt relating to patients from the devolved nations treated in the last three years, against total invoicing of £315m by English NHS trusts.[38]