NHS Wales was originally formed as part of the public health system for England and Wales created by the National Health Service Act 1946 with powers over the NHS in Wales coming under the Secretary of State for Wales in 1969. Responsibility for NHS Wales was passed to the Welsh Government under devolution in 1999 and has since then been the responsibility of the Welsh Minister for Health and Social Services.[1] 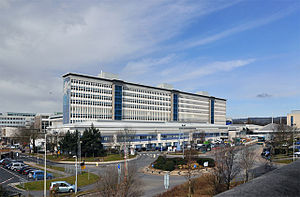 The University Hospital of Wales in Cardiff.

There are seven Local Health Boards (LHBs) in Wales and three national NHS Trusts.[3] Each LHB is responsible for delivering all NHS healthcare services within a geographical area. Three NHS Trusts, called 'all-Wales trusts', operate nationwide agencies and services. These are: the Welsh Ambulance Service,[4] Velindre NHS Trust[5] (providing a range of specialist services at local, regional and All Wales levels, including the Welsh Blood Service and specialist cancer services), and Public Health Wales.[6]

The current Health Boards were created on 1 October 2009 following a reorganisation of NHS Wales[7] that saw the abolition of 22 Local Health Boards (LHBs) and seven NHS Trusts that had existed since 2003.[8] Since the reorganisation Health Boards are responsible for delivering all NHS services, rather than the two-tiered Trust and LHB system that existed previously.

Wales' largest teaching hospital, the University Hospital of Wales based in Cardiff is the largest hospital outside London and third largest in the United Kingdom.

Five of the health boards paid for spot contracts with private healthcare providers costing a total of more than £6 million between 2013 and 2015 to carry out NHS work on elective surgery.[9]

Another important organisation in the structure is Health Commission Wales. This is an executive agency of the Welsh Government whose primary role is to centrally organise and fund all tertiary care and other highly specialist services. It also provides advice and guidance about specialist services to other parts of NHS Wales.

NHS Wales Informatics Service, established in April 2010 is a national organisation responsible for the strategic development of Information Communications Technology (ICT), the delivery of operational ICT services and information management[10] It is 'hosted unit' of Velindre NHS Trust.[11]

NHS Direct Wales/Galw Iechyd Cymru provides a non-emergency telephone health advice and information service. It operates 24 hours a day every day of the year with callers being given the option of communicating in Welsh or English. NHS Direct Wales is part of the Welsh Ambulance Service NHS Trust.

There are eight Community Health Councils in Wales which monitor the quality of the NHS services provided within a Health Board area and provide information about available services to the public.[12]

NHS Wales provides public healthcare in Wales and directly employs some 72,000 staff, making it Wales's biggest employer.[13] It employs a wide range of staff such as doctors, nurses, midwives and paramedics as well as allied health professionals such as technicians, microbiologists, radiographers and pharmacists. Staff in its support services include administrative staff, estates and management staff, catering and domestic support staff.

Most staff working for NHS Wales, including non-clinical staff and GPs (most of whom are independent contractors), are eligible to join the NHS Pension Scheme which, from 1 April 2015, is a career salary-average defined benefit scheme.

The Welsh Health Minister Mark Drakeford decided that from September 2014 NHS Wales staff would be paid at least the living wage, resulting in about 2,400 employees receiving an increase in salary of up to £470 above UK wide Agenda for Change rates.[14]

The geography of Wales means that there are areas where cross-border arrangements are necessary. The population of North Wales is too small to support specialist units, so patients travel to Liverpool and Manchester. There are no large hospitals in Mid Wales at all. More than 31,000 Welsh patients were treated in English hospitals in 2013/4.[15] In October 2014 Jeremy Hunt claimed that English hospitals close to the Welsh border were under "absolutely intolerable pressure" and that people were fleeing the "second class health service" in Wales.[16]

The entitlement to free Prescription charges is based on the GP with which a patient is registered, so some patients who live in England benefit from them.

University College London Hospitals NHS Foundation Trust complained in June 2015 that commissioners outside England use a "burdensome" prior approval process, where a funding agreement is needed before each stage of treatment. At the end of 2014–15 the trust was owed more than £2.3m for treating patients from outside England. A survey by the Health Service Journal suggested there was £21m of outstanding debt relating to patients from the devolved nations treated in the last three years, against total invoicing of £315m by English NHS trusts.[17]

In 2014 the Nuffield Trust and the Health Foundation produced a report comparing the performance of the NHS in the four countries of the UK since devolution in 1999. They included data for the North East of England as an area more similar to the devolved areas than the rest of England. They found that there was little evidence that any one country was moving ahead of the others consistently across the available indicators of performance. There had been improvements in all four countries in life expectancy and in rates of mortality amenable to health care. Despite the hotly contested policy differences between the four countries there was little evidence, where there was comparable data, of any significant differences in outcomes. The authors also complained about the increasingly limited set of comparable data on the four health systems of the UK.[18]

The performance of the NHS in Wales has been used by UK Prime Minister David Cameron as an illustration of what he views as mismanagement by Welsh Labour. Criticism is chiefly about waiting times for diagnostics and surgery, the absence of a Cancer Drugs Fund and the fact that very few private providers are used to keep waiting lists down. The Welsh border was described by David Cameron as 'a line between life and death'.[19] Andrew R. T. Davies claimed that "the Labour-run Welsh NHS is fast becoming one of the Conservatives' key electoral assets ahead of next year's general election". He launched a survey of attitudes to the NHS in 2014 which concluded that the Welsh held the NHS dear to their hearts, though almost two-thirds of respondents felt the performance of the Welsh NHS had declined in recent years. The survey found a wide range of problems caused by a lack of resources. Staff complained that Whistleblowers risked professional suicide and some patients said complaints or concerns were not taken seriously by NHS managers[20]

NHS Wales is governed by what its critics describe as "a post-war structure: with seven separate regional health boards, each dominated by Labour supporters" – the Taffia.[21]

Defenders of the NHS in Wales point out that it operates on £1,900 per person compared with the North East of England which is similar to Wales in terms of "need" and gets £2,100 per person. While some waiting lists such as orthopaedic surgery may be longer in Wales some other aspects of the service such as cancer care are better in Wales. English figures are not collected and reported on the same basis as Welsh ones.[22] 90% patients who used Welsh hospitals and GPs in 2013 were satisfied or very satisfied with their care. In contrast across Britain as a whole only 60% said they were satisfied with the NHS.[23]

In October 2014 the Daily Mail claimed that "Around half of Welsh cancer sufferers must wait six weeks or more for many scans and tests yet in England ... The comparable figure is less than 6%." The Welsh Government responded by pointing out that targets for timely treatment of cancer were the same in Wales as in England, for example that 98% not on the urgent pathway should start definitive treatment within the target time of 31 days. On the latest figures the performance in Wales was actually slightly better than in England. Wales has a specific waiting time target for diagnostic tests, different from England – the maximum wait for access to specified diagnostic tests is 8 weeks. In August 2014 24,107 patients were waiting more than 8 weeks for diagnostic tests in Wales; 70% receive their tests within the target time.[24] It defending the decision not to set up a Cancer Drugs Fund as in England, on the ground that the fund's own chair has admitted it provides funding for cancer drugs which have 'no impact on survival' and 'uncertainty as to whether quality of life is improved or not' and pointed out that the All-Wales Medicines Strategy Group got new drugs such as Sativex approved for use in Wales more quickly than the National Institute for Health and Care Excellence in England.[25]

In February 2016 the Organisation for Economic Co-operation and Development published a review which concluded that performance of the NHS in Wales was little different from that in the rest of the UK. They described performance across the UK as "fairly mediocre" saying that great policies were not being translated into great practices. They suggested that GPs should be more involved in health boards and that resources should be shifted out of hospitals.[26]

It was reported that there had been 10,395 recorded staff complaints about staffing levels between 2012 and 2015. The highest number of complaints (3,609) related to Cardiff and Vale University Health Board. The government response was that since 1999, the total number of staff working in the Welsh NHS had increased by a third. In 2015 there were 2,000 GPs working in the NHS in Wales, the highest number ever and an increase of 11% since 2003. The number of nursing, midwifery and health visiting staff increased from 28,157 in 2010 to 28,300 in 2014.[27]

In February 2015 Mark Drakeford wrote to the leader of the Welsh Liberal Democrats Kirsty Williams proposing a cross-party commission on the future of the NHS in Wales. Drakeford said: "Discussions about the long-term future of the Welsh NHS should sit outside the knockabout of day-to-day party politics." In March 2015 both Plaid Cymru and the Welsh Conservatives rejected the proposal because the terms of reference for the commission had already been set out.[28]