From Infogalactic: the planetary knowledge core
(Redirected from NYU School of Law)
Jump to: navigation, search
Not to be confused with New York Law School.

Established in 1835, the New York University School of Law (NYU Law) is the oldest law school in New York City. The school offers J.D., LL.M., and J.S.D. degrees in law, and is located in Greenwich Village, in downtown Manhattan.

NYU Law is regarded as one of the top 6 most prestigious and selective law schools in the United States. U.S. News & World Report currently ranks NYU Law 6th in the nation,[3] and has ranked the law school as high as 4th in recent years.[4] NYU Law is especially renowned for its strength in international law and tax law, and has been consistently ranked 1st in the country by U.S. News & World Report in both areas.[5] Additionally, NYU Law is ranked in the top 5 law schools in the world in the QS World University Rankings.[6] The latest edition of University of Chicago Professor Brian Leiter's ranking of the top law schools by student quality places NYU Law 4th (behind Columbia, ahead of Chicago) out of the 144 accredited schools in the United States.[7]

According to New York University School of Law's 2013 ABA-required disclosures, 93.7% of the Class of 2013 obtained full-time, long-term, JD-required employment nine months after graduation.[8]

NYU Law publishes ten student-edited law journals, including the New York University Law Review. The journals appear below in the order of their founding:

The law school's Root-Tilden-Kern Scholarship Program is a full-tuition scholarship awarded each year to twenty students committed to public service.

NYU Law offers several fellowships to students admitted to the LLM Program. The Hauser Global Scholarship admits eight to ten top LLM students from all over the world. The scholarship includes full tuition waiver and reasonable accommodation costs. In addition, it offers the Hugo Grotius as well as Vanderbilt scholarships for International law studies and other branches of law respectively.[10]

The Law school has a law and business program in which eight of the nation's student-leaders in law and business are awarded fellowships in the Mitchell Jacobson Leadership Program.[11] In addition, the NYU Center for Law, Economics and Organization administers the Lawrence Lederman Fellowship to facilitate the study of Law & Economics. The Fellowship provides a $5,000 scholarship to selected students who are afforded the opportunity to work closely with NYU Law faculty and participate in a series of collaborative workshops designed to help students write a substantial research paper.[12]

NYU Law School's LL.M. in Taxation and in International Taxation programs are widely considered to be the strongest LL.M. in Taxation and International Taxation programs in the United States, and has been consistently ranked #1 by the U.S. News & World Report magazine since they started ranking specialty law school programs in 1992.[13][14] Joshua D. Blank is currently the faculty director of the program.[15]

Tax LL.M. students are permitted to enroll in a general course of study or specialize in specific areas such as business taxation or estate planning.[16] Many of the program's professors are practitioners in their respective fields.[17]

LL.M is an abbreviation for Master of Laws, an advanced academic degree, pursued by those holding a professional law degree. In general, there are two types of LL.M. programs in the United States. The majority are programs designed to expose foreign legal graduates to the American Common Law. The other programs involve post doctoral study of a specialized area of the law such as Admiralty, Tax Law, Banking and Financial Law, Elder Law, Aeronautical Law or International Law.[18]

NYU has implemented a jointly granted NYU/Osgoode LLB/LLM program in which graduates are granted the LLB as well as an LLM from NYU in only 3 and a half years instead of the normally required four. More recently, the NYU School of Law has entered into similar dual degree agreements with the National University of Singapore Faculty of Law and the University of Melbourne Law School.

NYU Law offers a dual-degree program with Harvard's John F. Kennedy School of Government. Students may earn a JD/MPA or a JD/MPP.[20]

There is also a limited amount of cross-registration permitted with Columbia Law School. Each year, a limited number of students are permitted to take classes at each other's schools.[22] Columbia Law and NYU Law also play a basketball game every spring, the Deans' Cup, to raise money for their public interest and community service organizations.

Graduates of the law school routinely obtain employment in elite public and private-sector positions.[23] NYU Law ranks 2nd among all law schools in terms of the number of alumni working in the nation's top 50 law firms, and 6th in Supreme Court clerkship placement.[24][25]

According to New York University School of Law's 2013 ABA-required disclosures, 93.7% of the Class of 2013 obtained full-time, long-term, JD-required employment nine months after graduation.[26]

More than 7,000 applicants compete for 450 seats at the law school.[24] The latest edition of University of Chicago Professor Brian Leiter's ranking of the top law schools by student quality places NYU Law 4th out of the 144 accredited schools in the United States.[27] 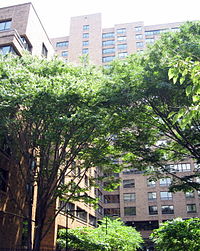 Located on West Third Street between Sullivan and Thompson, Furman Hall opened on January 22, 2004 and is named for alumnus and donor Jay Furman. It connects to Vanderbilt Hall through the law library, part of which is underneath Sullivan street. The underground level also hosts the Lawyering faculty. Floors one-three have classrooms, lounges, and study space. The fourth floor hosts the career counseling program, and the fifth and sixth floors house the legal practice clinics. The highest floors, generally inaccessible to non-residents, are luxury apartments for faculty and their families. The ninth floor is accessible to students and hosts the Lester Pollack Colloquium room.

The Law School's Main Building, named after Arthur T. Vanderbilt, occupies the entire block between West Third and Washington Square South (West Fourth) and between Macdougal and Sullivan Streets. Part of the first floor as well as the underground floors host the library, which it shares with Furman Hall. The first floor also holds the auditorium, student center, and main banquet hall. The second floor is mostly classrooms, while the third and fourth floors are mostly faculty and dean offices.[29]

Located at 240 Mercer Street, on the southern side of West Third street, adjacent to Broadway, and a couple blocks east of D'Agostino Hall, Wilf Hall, Furman Hall and Vanderbilt Hall, the Mercer Residence houses approximately 500 Law students and faculty. Its rooms are quite a bit more spacious than those in D'Agostino Hall. The seventh floor enjoys a terrace and two computer rooms and the 8th floor provides four small study rooms. The lobby level houses a game room (pool table, foos ball, dart board, ping pong table) and the basement is home to "Mercer Pub" (a room with couches, tables, and a small kitchen that can also be reserved by student groups for social events) and several student run organizations. Mercer Residence is available for summer housing for non-NYU Law students through its Summer Living in New York program.

Located at the intersection of West Third Street and MacDougal Street in Greenwich Village, D'Agostino Residence Hall houses approximately 300 law students and faculty.[citation needed]It is across the street from the backside of the main building of the law school, Vanderbilt Hall, and less than 1 block from Wilf Hall and Furman Hall. The building has two terraces - one on the 12th floor and one on the 14th floor- that offer beautiful views of Washington Square Park and the Empire State Building.[30]

The lobby is a double-split-level. Elevators to the apartments are on the highest level, the Front Desk is on the street level, and The Commons (residents' lounge with computers and printers) is on the lower level. One floor beneath The Commons is the sub-basement, home to most of NYU's legal journals. The second (above-ground) floor, houses numerous administrative offices (Development, Alumni Relations, Special Events, Communications, Human Resources and Financial Services). Two large function rooms - Lipton Hall and the Faculty Club - are also located in the building.[31]

The law building is named after Filomen D'Agostino, one of the first woman lawyers, who graduated in 1920. Later in life, Ms. D'Agostino donated $4 million to support residential scholarship and faculty research; the school responded by naming their new apartment building after her.[32]

D'Agostino Hall is also available for summer housing for non-NYU Law students through its Summer Living in New York program.

22 Washington Square North, located in a historic 1830's townhouse on the north side of Washington Square Park in "The Row", houses the Straus Institute for the Advanced Study of Law & Justice, the Jean Monnet Center for International and Regional Economic Law & Justice, and the Tikvah Center for Law & Jewish Civilization. This building was renovated in 2009 by Morris Adjmi Architects, has a green wall, and should meet silver LEED (Leadership in Energy and Environmental Design) standards.

Wilf Hall, at 139 Macdougal Street, houses approximately a dozen of the schools centers, programs and institutes as well as the admissions offices (Graduate and JD). Per the NYU Law Magazine, it is a "campus destination for faculty, students, and research scholars from an array of disciplines to exchange ideas and, through their work, shape the public discourse around the leading social and political issues of the day." Wilf Hall is hoped to be one of a small number of buildings in New York City to achieve a platinum rating in the Leadership in Energy and Environmental Design Green Building Rating System. Among numerous environmental features, Wilf Hall has a green roof and terraces and a bicycle storage room and showers for commuting riders.

Wilf Hall also contains the Provincetown Playhouse. The playhouse opened in the 1920s and premiered many Eugene O'Neil plays. The theatre is run by NYU's Steinhardt School of Education.

NYU Law is home to many centers and institutes, specializing in various areas of law.[33]

According to New York University School of Law's official 2013 ABA-required disclosures, 93.7% of the Class of 2013 obtained full-time, long-term, JD-required employment nine months after graduation.[26] NYU Law's Law School Transparency under-employment score is 3%, indicating the percentage of the Class of 2013 unemployed, pursuing an additional degree, or working in a non-professional, short-term, or part-time job nine months after graduation.[54]

NYU Law has the second highest number of faculty who are members of the American Academy of Arts and Sciences with 19 inductees, behind only Harvard.[57]

Some of NYU's notable professors include: