Nabisco (from the National Biscuit Company) is an American manufacturer of cookies and snacks headquartered in East Hanover, New Jersey. The company is a subsidiary of Illinois-based Mondelēz International.[1] Nabisco's plant in Chicago, a 1,800,000-square-foot (170,000 m2) production facility at 7300 S. Kedzie Avenue, is the largest bakery in the world,[2] employing more than 1,200[2] workers and producing around 320 million pounds of snack foods annually.

Its products include Chips Ahoy!, Belvita, Oreos, Ritz Crackers, Triscuits, and Wheat Thins for the United States, United Kingdom, Mexico, and Venezuela, as well as other parts of South America.

All Nabisco cookie or cracker products are branded Christie in Canada. Prior to the Post Cereals merger, the cereal division kept the Nabisco name in Canada. The proof of purchase on their products is marketed as a "brand seal". The Nabisco name became redundant in Canada after Kraft took over.

Nabisco opened corporate offices as the National Biscuit Company in the world's first skyscraper, the Home Insurance Building in the Chicago Loop in 1898.[3]

File:Een-Oreo.jpg
The Nabisco trademark imprinted on an Oreo cookie 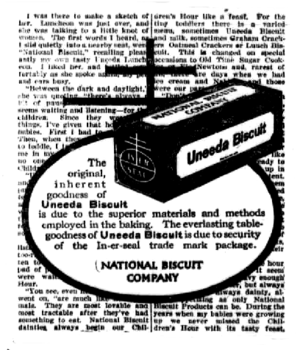 Newspaper ad for the Uneeda biscuits, from 1919: The Nabisco "antenna" trademark can be seen behind the product.

Nabisco's trademark, a diagonal ellipse with a series of antenna-like lines protruding from the top (Orb and Web), forms the base of its logo and can be seen imprinted on Oreo biscuits in addition to Nabisco product boxes and literature. [4] It has been claimed in company promotional material to be an early European symbol for quality. It may be derived from a medieval Italian printer's mark that represented "the triumph of the moral and good over the evil and worldly",[citation needed] or to represent the act of winnowing, separating grain from chaff.[citation needed]

In Indonesia, the Nabisco logo is depicted with a similar colour to the Indonesian flag.

The name Nabisco is first used as part of a name for a sugar wafer in 1901. John G. Zeller was president of National Biscuit Company from 1923-1931.Nabisco celebrated its golden anniversary in 1948. By 1971, Nabisco had become the corporate name. In 1981, Nabisco merged with Standard Brands, which then merged with R.J. Reynolds in 1985.

In 2000, Philip Morris Companies, Inc. acquired Nabisco and merged it with Kraft Foods, Inc., one of the largest mergers in the food industry. In 2011, Kraft Foods announced it was splitting, making the snack-food business a separate company (to be called Mondelēz International LLC).[7] 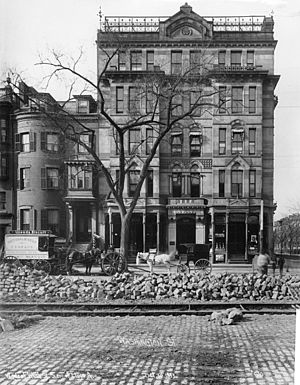 Nabisco dates its founding to 1898,[8] a decade when the bakery business underwent a major consolidation. Early in the decade, bakeries throughout the country were consolidated regionally, into companies such as Chicago's American Biscuit and Manufacturing Company (which was formed from 40 Midwestern bakeries in 1830), the New York Biscuit Company (consisting of seven eastern bakeries), and the United States Baking Company. In 1898, the National Biscuit Company was formed from the combination of those three. The merger resulted in a company with 114 bakeries across the US and headquartered in New York City. The word "biscuit" is a traditional term for what are now termed "cookies" and "crackers" in American English, though British English retains "biscuit" to refer to these baked goods.

Key to the founding of Nabisco was Pittsburgh baking mogul Sylvester S. Marvin. Marvin arrived in Pittsburgh in 1863 and established himself in the cracker business, founding S. S. Marvin Co. Its products included crackers, cakes, and breads. Marvin was called the Edison of manufacturing for his innovations in the bakery business. By 1888, it was the largest in the US, and the centerpiece of the National Biscuit Company . Marvin was also a member of the elite South Fork Fishing and Hunting Club of Johnstown Flood fame. The F. A. Kennedy Steam Bakery in Boston, known for inventing Fig Newtons and producing Lorna Doone cookies, was one of the very first acquisitions made by Nabisco, joining the company in 1898.[9]

After the consolidation, the president of Nabisco, Adolphus Green, asked Frank Peters to create a package to distribute fresher products. This paved its way for In-Er Seal package, whose logo is a prototype for the "Nabisco Thing", an animated character created in 1995 to sell its products to kids. The In-Er Seal package is a system of inter-folded wax paper and cardboard to "seal in the freshness" of the product. At the beginning of his presidency, Green decided the National Biscuit Company, often shortened to NBC, needed a new idea that grabbed the public's attention. He got it when his employees created a new cracker that was flakier and lighter than any of their competitors' versions.

The Uneeda biscuit looked promising, but Green had to make sure it got to customers fresh, so it was the first to use the In-Er Seal package in 1898. Until then, crackers were sold unbranded and packed loosely in barrels. Mothers would give their sons a paper bag and ask them to run to the store and get the bag filled with crackers. National Biscuit Company used this as part of Uneeda Biscuit advertising symbol, which depicts a boy carrying a pack of Uneeda Biscuit in the rain. In 2009 (after over 110 years), Nabisco discontinued the Uneeda biscuit, concerned that the product was not sufficiently profitable.

In 1924, the National Biscuit Company introduced a snack in a sealed packet called the Peanut Sandwich Packet. They soon added a second, the Sorbetto Sandwich Packet. These allowed salesmen to sell to soda fountains, road stands, milk bars, lunch rooms, and news stands. Sales increased, and in 1928, the company started to use the name NAB. The term Nabs today is used to generically mean any type of snack crackers, most commonly in the southern US.[11]

During WWII, the company manufactured K-rations for US troops. The first use of the red triangular logo was in 1952. The company name was changed to Nabisco in 1971.

The company became a part of RJR Nabisco in 1985 when it merged with R.J. Reynolds Tobacco Company.

In 1981, Nabisco merged with Standard Brands, maker of Planters Nuts, Baby Ruth and Butterfinger candy bars, Royal gelatin, Fleischmann's and Blue Bonnet margarines, and many other brands. The company was then renamed Nabisco Brands, Inc. At that time, it also acquired the Life Savers brand from the E.R. Squibb Company.

In 1985, Nabisco was bought by R.J. Reynolds, forming RJR Nabisco. After three years of mixed results, the company became one of the hotspots in the 1980s leveraged buyout mania. The company was in auction with two bidders: F. Ross Johnson, the company's president and CEO, and Kohlberg Kravis Roberts, a private equity partnership.

The company was sold to KKR in what was then the biggest leveraged buyout in history, described in the book Barbarians at the Gate: The Fall of RJR Nabisco, and a subsequent film.

In 1998 Nabisco Holdings announced its sale of its margarine and egg substitute business to ConAgra of Omaha. In 1997 the brands of Fleishmann’s, Blue Bonnet and Parkay had sales of $480 million.[20] It also sold its College Inn broth business to HJ Heinz[21] and its Venezuelan Del Monte operations to Del Monte Foods.[22]

In 1999 RJR Nabisco’s food and tobacco empire fell apart when they sold its international tobacco division to Japan Tobacco for $7.8 billion.[23]

The Altria Group (formerly Phillip Morris)[24] acquired Nabisco in 2000 for about $19.2 billion. Philip Morris then combined Nabisco with Kraft.[25] That acquisition was approved by the Federal Trade Commission subject to the divestiture of products in five areas: three Jell-O and Royal brands types of products (dry-mix gelatin dessert, dry-mix pudding, no-bake desserts), intense mints (such as Altoids), and baking powder. Kraft Foods, at the time also a subsidiary of Altria, merged with Nabisco.[26]

In 1997, the National Advertising Division of the Council of Better Business Bureaus[30] became concerned with an ad campaign for Planters Deluxe Mixed Nuts. The initial commercial featured a man and monkey deserted on an island. They discover a crate of Planters peanuts and rejoice in the peanuts' positive health facts.

Nabisco made a detailed statement describing how their peanuts were healthier than most other snack products, going as far as comparing the nutritional facts of Planters peanuts to those of potato chips, Cheddar cheese chips, and popcorn. Technically, the commercials complied with United States Food and Drug Administration regulations, and they were allowed to continue. However, as requested by the NAD, Nabisco agreed to make fat content disclosure more conspicuous in future commercials.[31]

The company's A1 Steak Sauce was the subject of a legal battle against a venue called Arnie's Deli in 1991. The delicatessen was selling and using a homemade sauce called "A2 Sauce." The verdict favored Nabisco.