Nahum (/ˈneɪ.əm/ or /ˈneɪhəm/; Hebrew: נַחוּם Naḥūm‎) was a minor prophet whose prophecy is recorded in the Hebrew Bible. His book comes in chronological order between Micah and Habakkuk in the Bible.[1] He wrote about the end of the Assyrian Empire, and its capital city, Nineveh, in a vivid poetic style.[2]

Little is known about Nahum's personal history. His name means "comforter," and he was from the town of Alqosh, (Nah 1:1) which scholars have attempted to identify with several cities, including the modern Alqosh of Assyria and Capharnaum of northern Galilee.[3] He was a very nationalistic Hebrew, however, and lived amongst the Elkoshites in peace. Nahum, called "the Elkoshite," is the seventh in order of the minor prophets.

The book was introduced in Calvin's Commentary[6] as a complete and finished poem:

No one of the minor Prophets seems to equal the sublimity, the vehemence and the boldness of Nahum: besides, his Prophecy is a complete and finished poem; his exordium is magnificent, and indeed majestic; the preparation for the destruction of Nineveh, and the description of its ruin, and its greatness, are expressed in most vivid colors, and possess admirable perspicuity and fulness.

Nahum, taking words from Moses himself, has shown in a general way what sort of "Being God is". The Reformation theologian Calvin argued, Nahum painted God by which his nature must be seen, and "it is from that most memorable vision, when God appeared to Moses after the breaking of the tables."[7] 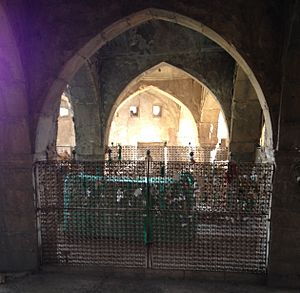 This is the tomb of the Jewish Prophet Nahum in Alqosh.

The tomb of Nahum is supposedly inside the synagogue at Alqosh, although there are other places outside Iraq that lay claim also to being the original "Elkosh" from which Nahum hailed. Alquosh was abandoned by its Jewish population in 1948, when they were expelled, and the synagogue that purportedly houses the tomb is in a poor structural state, to the extent that the tomb itself is in danger of destruction. The tomb underwent basic repairs in 1796. When all Jews were compelled to flee Alqosh in 1948, the iron keys to the tomb were handed to an Assyrian man by the name of Sami Jajouhana. Few Jews visit the historic site, yet Jajouhana continues to keep the promise he made with his Jewish friends, and looks after the tomb.[8] A team of US/UK construction engineers, led by Huw Thomas, is currently planning ways to save the building and the tomb.[9] Money had been allocated for proposed renovation in 2008. The tomb is currently in disrepair and may be threatened by the rise of ISIS in Iraq.[10]

There are however two other possible burial sites mentioned in historical accounts: Elkesi, near Ramah in the Galilee and Elcesei in the West Bank.[11]

The Prophet Nahum is venerated as a saint in Eastern Christianity. On the Eastern Orthodox liturgical calendar, his feast day is December 1[12][13][14] (for those churches which follow the traditional Julian Calendar, December 1 currently falls on December 14 of the modern Gregorian Calendar). He is commemorated with the other minor prophets in the Calendar of saints of the Armenian Apostolic Church on July 31.