Nahum Tate was born in Dublin and came from a family of Puritan clergymen. He was the son of Faithful Teate, an Irish clergyman[1] who had been rector of Castleterra, Ballyhaise, until his house was burnt and his family attacked after he had passed on information to the government about plans for the Irish Rebellion of 1641. After living at the provost's lodgings in Trinity College, Dublin, Faithful Teate moved to England — the incumbent at East Greenwich around 1650, and "preacher of the gospel" at Sudbury from 1654 to 1658 — before returning to Dublin by 1660. He published a poem on the Trinity entitled Ter Tria,[2] as well as some sermons, two of which he dedicated to Oliver and Henry Cromwell.[3]

Nahum Teate followed his father to Trinity College, Dublin in 1668, and graduated BA in 1672. By 1676 he had moved to London and was writing for a living. The following year he had adopted the spelling Tate, which would remain until his death, in 1715, in Southwark, London, England.[4] He was buried at St George Southwark 1 August 1715 as 'of next to the Prince Eugene, Mint'.[5] 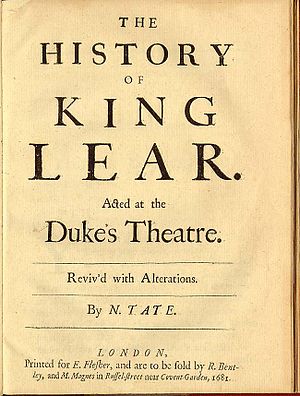 Tate published a volume of poems in London in 1677, and became a regular writer for the stage. Brutus of Alba, or The Enchanted Lovers (1678), a tragedy dealing with Dido and Aeneas, was dedicated to Charles Sackville, 6th Earl of Dorset;[3] it was later adapted to the libretto for Henry Purcell's opera Dido and Aeneas (1688 or earlier).[4] The Loyal General, with a prologue by Dryden, played at the Dorset Garden Theatre in 1680.[3]

Tate then turned to make a series of adaptations from Elizabethan dramas. His version of William Shakespeare's Richard II altered the names of the characters, and changed the text so that every scene, to use his own words, was "full of respect to Majesty and the dignity of courts"; but in spite of these precautions The Sicilian Usurper (1681), as his rewrite was called, was suppressed on the third performance on account of a possible political interpretation.[4] In 1681 Thomas Betterton played Tate's version of King Lear,[3] which entirely omitted the Fool, and ended happily in marriage between Cordelia and Edgar.[6] (Though Joseph Addison protested at this mutilation of Shakespeare, Samuel Johnson defended the poetic justice of Tate's adaptation.)[3] Coriolanus became The Ingratitude of a Commonwealth, played at the Theatre Royal in 1682. Tate's farce Duke and no Duke (first printed 1685, but acted earlier at the Theatre Royal) imitated Sir Aston Cockayne's Trappolin suppos'd a Prince. His Cuckold's Haven (performed 1685 at the Theatre Royal) was derived from Chapman and Marston's Eastward Ho. The Island Princess, or the Generous Portugals (1687) was adapted from John Fletcher. Injur'd Love, or the Cruel Husband (1707), altered from Webster's The White Devil, seems never to have been acted.[3]

In 1682 Tate collaborated with John Dryden to complete the second half of his epic poem Absalom and Achitophel.[7]

Tate wrote the libretto for Henry Purcell's opera Dido and Aeneas, which was given its first known performance in 1689. He also wrote the text for Purcell's Birthday Ode Come Ye Sons of Art in 1694. Tate also translated Syphilis sive Morbus Gallicus, Girolamo Fracastoro's Latin pastoral poem on the subject of the disease of syphilis, into English heroic couplets.

Tate's name is also connected with the famous New Version of the Psalms of David (1696), for which he collaborated with Nicholas Brady. Some items such as "As pants the hart" (Psalm 42) rise above the general level, and are said to be Tate's work.[4] A supplement was licensed in 1703 which included the Christmas carol "While Shepherds Watched Their Flocks", one of a number of hymns by Tate.

His poems were sharply criticized by Alexander Pope in The Dunciad.

Of his numerous poems the most original is Panacea, a poem on Tea (1700). In spite of his consistent Toryism, he succeeded Shadwell as poet laureate in 1692. He died within the precincts of the Mint, Southwark, where he had taken refuge from his creditors, in 1715.[4]

In addition to the well-known production by the Royal Shakespeare Company of Nicholas Nickleby in England and New York, directed by Trevor Nunn, in 1981, which included the concluding scene of Tate's version of Romeo and Juliet, with its happy ending, there has been at least one other production of Tate's work in New York.

In 1985, the Riverside Shakespeare Company of New York City staged Tate's History of King Lear in its original form, "happy ending" and all, directed by W. Stuart McDowell at The Shakespeare Center.[8] This included removing the Fool altogether, adding a confidante for Cordelia, named Arante, as well as an "abduction" scene of Cordelia on the heath. The play concluded with multiple happy endings: for Lear and Kent, and Cordelia and Edgar, who presumably wed after the play's conclusion. Musical interludes were sung by cast members during the act breaks, accompanied by a harpsichord in the orchestra pit.