Najaf (Arabic: النجف‎‎; BGN: An Najaf) is a city in Iraq about 160 km (roughly 100 miles) south of Baghdad. Its estimated population in 2013 was 1.000.000 people.[1] It is the capital of Najaf Governorate. It is widely considered the third holiest city of Shi'a Islam, the Shia world’s spiritual capital and the center of Shi'a political power in Iraq.[2][3][4][5][6] The city is home to the Imam Ali Shrine, and hosts millions of pilgrims yearly.

Najaf is considered sacred by both Shi'a and Sunni Muslims. Najaf is renowned as the site of the tomb of Alī ibn Abī Tālib also known as "Imām Alī", the First Imam of the Shiites, the cousin and son-in-law of the Islamic prophet Muhammad, whom the Shi'a consider to be the righteous caliph. Sunnis consider Ali the fourth Rashidun (rightly guided Caliphs). The city is now a center of pilgrimage from throughout the Shi'a Islamic world. It is estimated that only Mecca and Medina receive more Muslim pilgrims. As the burial site of Shi'a Islam's second most important figure,[7] the Imam Ali Mosque is considered by Shiites as the third holiest Islamic site.[7][8][9][10][11][12][13][14][15]

The Imam Ali Mosque is housed in a grand structure with a gold gilded dome and many precious objects in the walls. Nearby is the Wadi-us-Salaam cemetery, which is the largest cemetery in the world.[16] It contains the tombs of several prophets and many of the devout from around the world aspire to be buried there, to be raised from the dead with Imām Alī on Judgement Day. Over the centuries, numerous hospices, schools, libraries and Sufi convents were built around the shrine to make the city the center of Shīʻa learning and theology.

The Najaf seminary is one of the most important teaching centres in the Islamic world. Ayatollah Khomeini lectured there from 1964 to 1978.[1] Many of the leading figures of the new Islamic movement that emerged in Iraq, Iran and Lebanon in the 1970s had studied at Najaf.[17]

Najaf has a desert climate. This climate is considered to be BWh according to the Köppen climate classification. The average annual temperature is 23.6 °C . The rainfall here averages 97 mm. 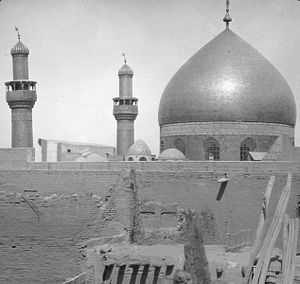 The Najaf area is located 30 km south of the ancient city of Babylon and 400 km north of the ancient Biblical city of Ur. The city itself was reputedly founded in 791 by the Abbasid Caliph Harūn ar-Rashīd, as a shrine to Ali ibn Abi Talib.[19]

History shows us that Najaf is indeed an ancient city who experienced its beginning far before the birth of Islam. Archaeological discoveries show the existence of a populace dating back to the times of Jesus. Najaf possesses one of the largest burial grounds in the vicinity for Christians. The centuries following have proven this to also be a city that possessed a multicultural and religious people.

Mohammed al-Mayali, who is the director of Inspectorate Effects of the province of Najaf, states "the excavation on the graves, which we have been working on for years, confirm that the Najaf contains the largest Christian cemetery in Iraq, with a cemetery area of 1416 acres. We have found indications of Christianity on the graves through representations of crosses and stones with Christ-like engravings. There are also relics that date back to the pre-Islamic Sassanid period. Also discovered in the excavation was proof of a thriving glass industry. Pots were decorated with the cross. as well as Hebrew writings, indicating a community of religious coexistence."

In Islam, the city is considered to have started with a man named Ali who instructed that his burial place should remain a secret, as he had many enemies and he feared that his body might be subjected to some indignity. According to legend, the dead body of Ali was placed on a camel which was driven from Kufa. The camel stopped a few miles west of the city where the body was secretly buried.[20] No tomb was raised and nobody knew of the burial place except for a few trusted people.

It is narrated that more than a hundred years later the Abbasid Caliph, Harun al-Rashid, went deer hunting outside Kufa and the deer sought sanctuary at a place where the hounds would not pursue it. On inquiry as to why the place was a sanctuary Harūn ar-Rashīd, he was told that it was the burial place of Ali. Harūn ar-Rashīd ordered a mausoleum to be built on the spot and in due course the town of Najaf grew around the mausoleum.

Under the rule of the Ottoman Empire, Najaf experienced severe difficulties as the result of repeated raids by Arab desert tribes and the Persian army with acute water shortages causing lack of a reliable water supply. The number of inhabited houses in the city had plummeted from 3,000 to just 30 by the start of the 16th century.

When the Portuguese traveller Pedro Texeira passed through Najaf in 1604, he found the city in ruins, inhabited by little more than 500 people.[21] This was largely the result of a change in the course of the Euphrates river eastwards in the direction of Hilla, leaving Najaf and Kufa high and dry, leading to the destruction of the local formerly rich agriculture, demise of the palm groves and orchards, followed by the salinization of the underground water due to evaporation.

During the 18th century the scholarly life of Najaf came to be dominated by Persian-speaking ulema from Iran.[22]

The city was besieged by the Wahhabis in the late 18th century, which prompted the clergy of the city to arrange for the construction of a wall around the city and under-ground tunnels as a refuge for the women and children if the wall was overrun. These fortifications successfully repelled a Wahhabi siege later on.

The water shortages were finally resolved in 1803 when the Euphates made its way to the city once again. The shift in the river's flow was the product of a century-long effort by the Ottomans to shift the flow of the river, so as to deprive marsh-dwelling tribes like the Khaza'il of the watery environment that allowed them to evade state control. These long-term efforts rendered successful the construction of the Hindiyya Canal in 1793, which further shifted the flow of the Euphrates. These hydrological shifts were to have religious implications. Most notable was the consolidation and spread of Shi'ism. As the shrine city of Najaf gained access to water again, its notables and holy men began to wield considerable power in the area.[23]

The Ottomans were expelled in an uprising in 1915, following which the city fell under the rule of the British Empire. The sheikhs of Najaf rebelled in 1918, killing the British governor of the city by Sayed Mahdi Al-Awadi and cutting off grain supplies to the Anaza, a tribe allied with the British. In retaliation the British besieged the city and cut off its water supply. The rebellion was put down and the rule of the sheikhs was forcibly ended. A great number of the Shia ulema were expelled into Persia/Iran where they set the foundations for the rise of the city of Qom as the center of the Shia learning and authority in lieu of Najaf. Najaf lost its religious primacy to Qom and was not to regain it until the 21st century and the establishment of a Shia-majority government in Iraq after 2003.

During the 2003 invasion of Iraq, Najaf was a key target of the invading United States forces. The city was encircled during heavy fighting on March 26, 2003 and was captured on April 3, 2003. 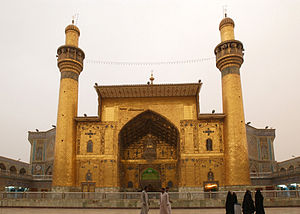 The Imām Alī Mosque, an important shrine in Najaf

The clerical authorities of the Shīa enclave of Sadr City in Baghdad, which claimed autonomy in April 2003 after the fall of Baghdad, claimed to be taking their orders from senior clerics in Najaf.

On April 4, 2004, the Mahdi Army attacked the Spanish-Salvadoran-ALARNG base (Camp Golf, later renamed Camp Baker) in An Najaf, part of a coordinated uprising across central and southern Iraq in an apparent attempt to seize control of the country ahead of the June 30, 2004 handover of power to a new Iraqi government. This uprising led to the American troops arriving in the city in the wake of the Spanish withdrawal. In August 2004, heavy fighting broke out again between US forces and Al-Sadr's Mahdi Army. The battle, lasted three weeks and ended when senior Iraqi cleric Grand Ayatollah Alī Al-Sīstānī negotiated an end to the fighting.

Published in the 19th-20th centuries