Names of God in Islam

According to 9th-century collections of hadith, the tradition of there being "99 names" is sahih (reliable), while the tradition of the actual list of 99 names as given by some collectors, in at least three different variants, is stated to be gharib (scarce, unreliable).[3] Most names in these lists are divine epithets taken from the text of the Quran, with a minority based in oral tradition or Sunnah. The lists of names vary because there are more than 99 such epithets to choose from.

Different sources give different lists of the 99 names.[4] 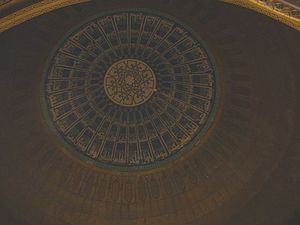 The 99 names of God on the ceiling of the Grand Mosque in Kuwait.

In the hadith, Muhammad is said to have invoked God by a number of names.[5] The origin of the number 99 specifically is commonly attributed to a hadith[which?] considered weak,[according to whom?] although there are less-commonly cited hadith that are considered authentic and also support the same point.[4] According to Sahih Muslim, 35:6475:

Abu Hurairah reported Allah's Messenger [Muhammad] (may peace be upon him) as saying: "There are ninety-nine names of Allah; he who commits them to memory would get into Paradise. Verily, Allah is Odd and He loves odd numbers. And in the narration of Ibn 'Umar [the words are]: 'He who enumerated them'."

The Quran refers to God's "most beautiful Names" (al-ʾasmāʾ al-ḥusná).[6] Gerhard Böwering[who?][year needed] refers to Sura 17:110 as the locus classicus to which explicit lists of 99 names used to be attached in Quranic commentary. A cluster of more than a dozen Divine epithets which are included in such lists is found in Sura 22:22–24. Mystic philosopher Ibn Arabi surmised that the 99 names are "outward signs of the universe's inner mysteries".[clarification needed][4]

Most, though not all, of the traditionally listed 99 names are found somewhere in the Quran itself. The others are taken from the hadith.[4][7][8]

The list is not necessarily fixed, as more than 99 divine epithets can be adduced from Quran and hadith combined,[9] although the list of names given in modern sources is mostly that compiled by al-Walid ibn Muslim.[year needed][citation needed]

There is no universal agreement among Muslims as to what exactly counts as a name of Allah, and what does not. Additionally, while some names are only in the Qur'an, and others are only in the hadith, there are some names which appear in both. Different sources give different lists of the 99 names.[4] Furthermore, in record, there are more than 1001 names given in one text.[which?]

The following list is based on the one found in the Jamiʿ at-Tirmidhi (9th century).[citation needed] Other hadith, such as those of al-Bukhari, Muslim, Ibn Majah, al-Hakim or Ibn ʿAsākir, have variant lists. All attribute the original compilation of the list of names to Abu Hurairah.

Al-Tirmidhi comments on his list: "This (version of the) hadith is gharib [unusual, scarce]; it has been narrated from various routes on the authority of Abu Hurairah, but we do not know of the mention of the Names in the numerous narrations, except this one." Various early Muslim exegetes, including Jaʿfar al-Sadiq, Sufyan ibn `Uyaynah, Ibn Hazm, al-Qurtubi, Ibn Hajar al-Asqalani, have given their own versions of lists of 99 names.[10]

Please note the written Arabic spelling of the names written in Arabic in the table are in the vowelled Classical/ Qur'anic form (proper = in the Holy Qur'an and Ahādith) with the square bracketed "[.]" variant of the written Arabic forms given in common or modern texts - usually in media, some long vowels and punctuations are omitted for the easier typing and reading.

There is a tradition in tasawwuf to the effect the 99 names of God point to a mystical "Greatest Name" (Ismul A'zam, الإسم الأعظم).[12] This "Greatest Name of Allah" is said to be "the one which if He is called (prayed to) by it, He will answer."[13]

According to a hadith narrated by Abdullah ibn Masud,[which?] some of the names of God have also been hidden from mankind.[14] More than 1000 names are listed in the Jawshan Kabir invocations.

A Muslim may not be given any of the 99 names of God in exactly the same form.[15] For example, nobody may be named al-Malik "the King", but may be named Malik "King". This is because of the belief that God is almighty, and no human being is the equivalent of God, and no human being will ever be the equivalent of God. Muslims are allowed to use the 99 names of God for themselves but should not put 'Al' at the front of them.[15]

However the names of God can be combined with the word "‘Abd-", which means "slave" (of God) and are commonly used as Arabic name among Muslims, such as Abd al-Rahman. The two parts of the name may be written separately (as above) or combined as one transliterated name; in such a case, the vowel transcribed after "Abd" is often written as u when the two words are transcribed as one: e.g., Abdurrahman, Abdul'aziz, "Abdul Jabbar", or even Abdullah ("Servant of God"). (This has to do with Arabic case vowels, the final u vowel showing the normal "quote" nominative/vocative case form: ʿabdu.)

Some Muslim people have names resembling those 99. Examples include:

Bahá'í sources state that the 100th name was revealed as "Bahá’" (Arabic: بهاء‎‎ "glory, splendor"), which appears in the words Bahá'u'lláh and Bahá'í. They also believe that it is the greatest name of God.[16][17] The Báb wrote a noted pentagram-shaped tablet with 360 derivatives of the word "Bahá'" used in it.[16]

According to Bahá'í scholar ‘Abdu’l-Hamíd Ishráq-Khávari, Bahāʾ al-dīn al-ʿĀmilī adopted the Persian poetic pen name "Bahāʾ" after being inspired by the words of the fifth Twelver Imam, Muhammad al-Baqir, and the sixth Imam, Ja'far al-Sadiq, who stated that the greatest name of God was included in either the Duʿāʾu l-Bahāʾ, a dawn prayer for Ramadan, or the Aʿmal ʿam Dawūd.[16] In the first verse of the duʿāʾu l-Bahāʾ, the name "Bahāʾ" appears four times.[18]