Namen (help·info), Nameur in Walloon) is a city and municipality in Wallonia, Belgium. It is both the capital of the province of Namur and of Wallonia. It hosts the Walloon Parliament.

Namur stands at the confluence of the Sambre and Meuse rivers and straddles three different regions – Hesbaye to the north, Condroz to the south-east, and Entre-Sambre-et-Meuse to the south-west. The language spoken is French. 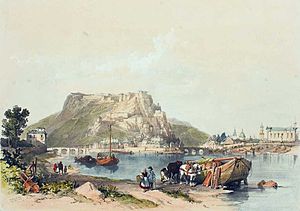 The town began as an important trading settlement in Celtic times, straddling east-west and north-south trade routes across the Ardennes. The Romans established a presence after Julius Caesar defeated the local Aduatuci tribe.

Namur came to prominence during the early Middle Ages when the Merovingians built a castle or citadel on the rocky spur overlooking the town at the confluence of the two rivers. In the 10th century, it became a county in its own right. The town developed somewhat unevenly, as the counts of Namur could only build on the north bank of the Meuse - the south bank was owned by the bishops of Liège and developed more slowly into the town of Jambes (now effectively a suburb of Namur). In 1262, Namur fell into the hands of the Count of Flanders, and was purchased by Duke Philip the Good of Burgundy in 1421.

After Namur became part of the Spanish Netherlands in the 1640s, its citadel was considerably strengthened. Louis XIV of France invaded in 1692, capturing the town and annexing it to France. His renowned military engineer Vauban rebuilt the citadel. French control was short-lived, as William III of Orange-Nassau captured Namur only three years later in 1695 during the War of the Grand Alliance. Under the Barrier Treaty of 1709, the Dutch gained the right to garrison Namur, although the subsequent Treaty of Utrecht of 1713 gave control of the formerly Spanish Netherlands to the Austrian House of Habsburg. Thus, although the Austrians ruled the town, the citadel was controlled by the Dutch. It was rebuilt again under their tenure.

General Jean-Baptiste Cyrus de Valence's column laid siege to the city on 19 November 1792 during the War of the First Coalition and - after 12 days - the city surrendered on 1 December and its whole garrison of 3,000 men was taken prisoner. France invaded the region again in 1794, annexing Namur and imposing a repressive regime. After the defeat of Napoleon in 1815, the Congress of Vienna incorporated what is now Belgium into the United Kingdom of the Netherlands. Belgium broke away from the Netherlands in 1830 following the Belgian Revolution, and Namur continued to be a major garrison town under the new government. The citadel was rebuilt yet again in 1887.

Namur was a major target of the German invasion of Belgium in 1914, which sought to use the Meuse valley as a route into France. On August 21, 1914, the Germans bombarded the town of Namur without warning. Several people were killed. Despite being billed as virtually impregnable, the citadel fell after only three days' fighting and the town was occupied by the Germans for the rest of the war. Namur fared little better in World War II; it was in the front lines of both the Battle of the Ardennes in 1940 and the Battle of the Bulge in 1944. The town suffered heavy damage in both wars.

Namur continued to host the Belgian Army's paratroopers until their departure in 1977.

After the creation of the Walloon Region, Namur was chosen as the seat of its executive and parliament. In 1986, Namur was officially declared capital of Wallonia.[2] Its position as regional capital was confirmed by the Parliament of Wallonia in 2010.[3] 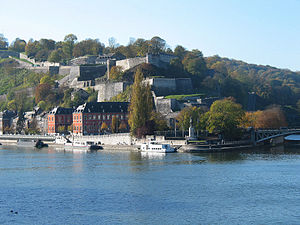 Namur, the Meuse, the Walloon Parliament and the citadel

Namur is an important commercial and industrial centre, located on the Walloon industrial backbone, the Sambre and Meuse valley. It produces machinery, leather goods, metals and porcelain.[citation needed] Its railway station is also an important junction situated on the north-south line between Brussels and Luxembourg City, and the east-west line between Lille and Liège. River barge traffic passes through the middle of the city along the Meuse.

Namur has taken on a new role as the capital of the federal region of Wallonia. Its location at the head of the Ardennes has also made it a popular tourist centre, with a casino located in its southern district on the left bank of the Meuse.

The town's most prominent sight is the citadel, now demilitarised and open to the public. Namur also has a distinctive 18th century cathedral dedicated to Saint Aubain and a belfry classified by UNESCO as part of the Belfries of Belgium and France which are listed as a World Heritage Site.[4]

The Couvent des Soeurs de Notre-Dame used to contain masterpieces of Mosan art by Hugo d'Oignies, currently presented in the Musée des Arts Anciens (Rue de Fer). Elsewhere there is an archeological museum and a museum dedicated to Félicien Rops.

An odd Namurois custom is the annual Combat de l'Échasse d'Or (Fight for the Golden Stilt), held on the third Sunday in September. Two teams, the Mélans and the Avresses, dress in medieval clothes while standing on stilts and do battle in one of the town's principal squares.[citation needed]

Since 1986 Namur has been home to the Namur International Festival of French-Speaking Film.[5] A jazz (Nam'in'Jazz) and a rock (Verdur Rock) festival both take place in Namur annually.

The annual Namur cyclo-cross race, part of the UCI Cyclo-cross World Cup, takes place on the hills around the citadel.

Sights near Namur include Maredsous Abbey, Floreffe Abbey, and Annevoie Castle with its surrounding Jardins d'Annevoie.

Namur is twinned with: