From Infogalactic: the planetary knowledge core
Jump to: navigation, search
Not to be confused with Battle of Nanchang.

The Nanchang Uprising (Chinese: 南昌起义; 1 August 1927) was the first major Kuomintang–Communist engagement of the Chinese Civil War, begun by the Communists to counter the anti-communist purges by the Nationalist Party of China.

The Kuomintang (KMT, or Nationalist Party) established a "Revolutionary Committee" at Nanchang to plant the spark that was expected to ignite a widespread peasant uprising. Deng Yanda, Song Qingling (Soong Ching-ling, Madame Sun Yat-sen) and Zhang Fakui (who later crushed the uprising) were among the political leaders.[1]

Military forces in Nanchang under the leadership of He Long and Zhou Enlai rebelled in an attempt to seize control of the city after the end of the first Kuomintang-Communist alliance. Other important leaders in this event were Zhu De, Ye Ting and Liu Bocheng.

Communist forces successfully occupied Nanchang and escaped from the siege of Kuomintang forces by August 5, withdrawing to the Jinggang Mountains of western Jiangxi. August 1 was later regarded as the anniversary of the founding of the People's Liberation Army and the first action fought against the Kuomintang. 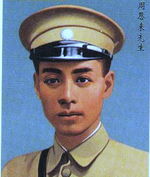 The rebellion was initially planned to take place during the night of July 30, but due to complications with Zhang Guotao it was postponed until the next day. On the morning of August 1, 1927, at exactly 2:00 a.m., Zhou Enlai, He Long, Nie Rongzhen, Ye Ting, Ye Jianying, Lin Biao, Zhu De, Chen Yi and Liu Bocheng led their troops and attacked the city of Nanchang from different directions. Four hours later they took the city, capturing 5,000 small arms and around 1,000,000 rounds of ammunition.

Jung Chang claims that the operation led by Zhou Enlai was supervised by Soviet military advisors. Their goal was to lead the troops to a coastal area in order to receive a supply of weapons from the Soviet Union.

Facing a counterattack from the Nationalists, the Communists decided to retreat south towards the province of Guangdong. Once there they would try to take over the city of Guangzhou while spreading their influence to the peasants and farms in that area. 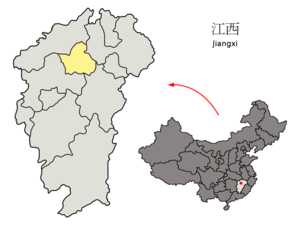 Location of Nanchang in China

Guangzhou was the target set by the Soviet Comintern and, on August 3, Communist troops pulled out of Nanchang. Their Little Long March came to an end at the beginning of October, as they came down out of the Hakka uplands and into the Chaoshan area. In Chaozhou they were defeated by Nationalist-affiliated troops. The Communists were broken up and traveled in two general directions, one heading to Shanwei where they engaged the Nationalists in guerrilla warfare, and the other to southern Hunan, where they eventually joined a force under Mao Zedong, whose abortive Autumn Harvest Uprising had been no more successful.

The Communist forces had suffered such a decisive and disastrous defeat that only 1,000 soldiers remained as a complete unit, reforming into a regiment. Under the command of Zhu De and Chen Yi, who had faked their names, the regiment sought refuge from a local Hunan warlord. From this humble beginning the force eventually grew to a force 10,000 strong, traveling to Jiangxi and joining Mao Zedong at Jinggangshan in April 1928.

Liu Bocheng became a fugitive but was lucky enough to find other Communists who helped him and eventually sent him to the Soviet Union for military training, while Lin Biao deserted after the defeat. However, he had to return to the Communist force because of his fear that locals hostile to his side would turn him over to his enemies or kill him. Guo Moruo fled to Japan after the defeat.

Other surviving members were much less fortunate; all became fugitives. Zhou Enlai, Ye Jianying and Ye Ting lost contact with the others and fled to Hong Kong, with Zhou seriously ill. The three had two pistols with them and were successful in reaching Hong Kong. Nie Rongzhen, the other communist leader, also successfully escaped to Hong Kong.

He Long had strongly opposed the retreat plan, accurately pointing out that marching 1000 miles in the heat of summer would put a severe strain on the troops, and that popular support for the Communists in Guangdong was merely a fraction of the huge support they had among the peasantry in Hunan. His opinion was that the new Communist base should be established in the border region of Hunan, suggesting that in Hunan the Communist troops would be easily resupplied and their numbers increased by the enlistment of the local populace. However, his suggestion was vetoed.

He Long went home alone after the defeat. Demoted from his position as an army commander in charge of tens of thousands of men to that of a beggar, he was not well received by his family except for a few who were already Communists. He would soon raise another force of Communist soldiers, this time more than 3000 strong, but it would be wiped out by the Nationalists, with less than three dozen members surviving. It would take a year for He Long's force to recover again for the third time.