Nanterre (French pronunciation: ​[nɑ̃.tɛʁ]) is a commune in the western suburbs of Paris, France. It is located 11.1 km (6.9 mi) north-west of the centre of Paris.

Nanterre is the capital of the Hauts-de-Seine department as well as the seat of the Arrondissement of Nanterre.

The eastern part of Nanterre, bordering the communes of Courbevoie and Puteaux, contains a small part of the La Défense business district of Paris and some of the tallest buildings in the Paris region. Because the headquarters of many major corporations are located in La Défense, the court of Nanterre is well known in the media for the number of high-profile lawsuits and trials that take place in it. The city of Nanterre also includes the Paris West University Nanterre La Défense, one of the largest universities in the Paris region.

The name of Nanterre originated before the Roman conquest of Gaul. The Romans recorded the name as Nemetodorum. It is composed of the Celtic word nemeto meaning "shrine" or "sacred place" and the Celtic word duron (neuter) "hard, tough, enduring". The sacred place referred to is supposed to have been a famous shrine that existed in antiquity.

Inhabitants of Nanterre are called Nanterriennes (feminine) and Nanterriens (masculine).

The sacred shrine of antiquity that is referred to entymologically had been placed by tradition in Mont-Valérien. However, archeologic discoveries made between 1994 and 2005 found a Gallic necropolis which has been dated to the third century BC, and also call into debate both the exact location of the pre-Roman capital of the Parisii and the initial site of Lutetia, the Roman era Paris.[1] The large necropolis, as well as working people's homes from some time later in the ancient era, is near the bank of the Seine, in the northwest of Nanterre, and might be the sacred place that is being referred to entymologically. Lutetia is mentioned by Julius Caesar in 50 BCE, reporting an assembly in Lutetia in 53 BC between himself, commander of the Roman Legions, and local Gallic leaders.[2] Although this had been thought to possibly be Île de la Cité, largely since Caesar mentions an island, the river at Nanterre follows two channels around an island. In 52 BC, the Parisii took up arms with the Gallic war leader Vercingetorix, and were defeated by Titus Labienus, one of Caesar's legates. Caesar mentions in his Commentarii that the Parisii destroyed the bridges and set fire to Lutetia before the arrival of the Roman forces. The archeological work in Nanterre has suggested over 15 hectares of pre-Roman or Roman era construction. These archeologic findings may be an indication that Nanterre was the closest pre-Roman settlement to the City's modern centre.[3][2]

On 27 March 2002, Richard Durn, a disgruntled local activist, shot and killed eight town councilors and 14 others were wounded in what the French press dubbed the Nanterre massacre. On 28 March, the murderer killed himself by jumping from the 4th floor of the Quai des orfèvres, in Paris, while he was questioned by two policemen about the reason for his killing in the Nanterre City Hall.

Nanterre is divided into three cantons:

Groupe du Louvre and subsidiary Louvre Hôtels have their head office in Village 5 in La Défense and Nanterre.[6][7][8]

The rugby union club Racing 92, currently based in another Paris suburb, Colombes, are building a new stadium in Nanterre. The venue, scheduled to open in 2016, is tentatively known as Arena 92. It will have a capacity of 32,000 for rugby and 40,000 for concerts. 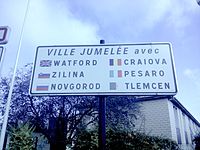 Nanterre is twinned with: