Nantes Cathedral or the Cathedral of St. Peter and St. Paul, Nantes (French: Cathédrale Saint-Pierre-et-Saint-Paul de Nantes), is a Gothic Roman Catholic cathedral in the city of Nantes, Pays de la Loire, France. The construction of the cathedral began in 1434, on the site of a Romanesque cathedral, and took 457 years to finish, finally reaching completion in 1891.

The reconstruction of the cathedral commenced during the early to mid-15th century during a time when Nantes and Brittany were commercially prosperous, initiating such large-scale architectural projects on a wide scale, partly owing to the opportunist and skilful diplomatic policy of John V in a period of political turmoil and conflict with England.

The cathedral's foundation stone was laid on 14 April 1434, by John V, Duke of Brittany and Jean de Malestroit, Bishop of Nantes (1417-1443). The first architect in charge was Guillaume de Dammartin who was later replaced by Mathurin Rodier. The construction began with the west façade, the aisles of the nave and its lateral chapels.[1]

Leniaud et al.[2] divide the building process in five phases. The first phase took place between c. 1434 and c. 1470. In this period the west façade and the tower bay were built, as were the south aisle of the nave with its chapels, and the south arcade pillars. The bases of those pillars resemble the ones of the choir of Mont-Saint-Michel, which was begun after 1444. The arms of Duke John, who died in 1442, were placed in the staircase to the balcony, above the ducal portal, on the south side of the southern tower bay. The vaults in the belfry of that tower were decorated with the arms of Bishop Guillaume de Malestroit (1443-1462). The triforium of the tower bay was constructed in an earlier and different style (Flamboyant, with a network of reticulated tracery) than the one of the nave proper. Bronze decoration of the central portal's doors was undertaken in 1482.

The second phase took place from c. 1470 to c. 1490. During this time the nave, the north aisle and its chapels were built. They were completed by 1485 or slightly later. The west wall of the north transept and the north-west crossing pier, perhaps up to capital height, were also constructed in this period. 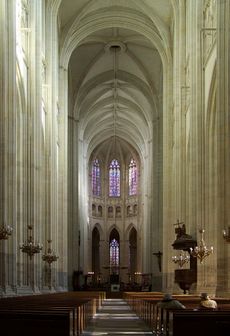 In the third phase, c.1500–1516, the glass in the great west window was installed (1498), as a gift from Queen Anne. In 1500 took place the vaulting of the first bay of the nave. From 1508 to 1516 the eastern bay of the south aisle of the nave and its chapel was completed and vaulted; the south transept was begun, finishing most of the upper parts of its western wall by 1519-1520. The financial support came from Bishop Guillaume Guegen and the architect was Jacques Drouet.

The last phase is the post-medieval one. It spanned from c.1626 to 1630 and led to the completion of the nave high vaulting (four eastern bays) and the construction of the nave flyers. The south transept was completed sometime between 1631 and 1637 or perhaps later, in a sympathetic Gothic style.[2] Louis Le Vau recommended to the Chapter at Nantes, in about 1650, to build the choir in a Gothic style.

The rest of the north transept and the choir, under the direction of St. Felix Seheult (city architect), were finished between 1840 and 1891, at a time of keen revival of the Catholic faith. The long wait was also due to the fact that the former (Romanesque) church was standing right next to the city's protective walls, which had to be taken down before completing the choir, while destroying the remains of the previous cathedral as it was covered by the larger, new one.

The edifice was damaged by Allied bombing during World War II, on 15 June 1944. On 28 January 1972, a gigantic fire started on the roof. Firemen managed to bring it under control, but the timber frame was severely damaged and many other damages were inflicted. This event led to what was undoubtedly the most complete interior restoration of a cathedral in France.

The elevation and the regularity of the plan of the cathedral are French. Still the majority of the details are Late Gothic, e.g., the absence of capitals, the plinths with concave sides and separated bases for the shafts, the Flamboyant tracery, the masking of the piers by shafts, etc.[3]

Ground plan of the cathedral

The plain façade is largely compensated for by the polish of the interior of the building. The whiteness of the stone, accentuated by recent restoration work, the imposing dimensions of the nave and the aisles and the effect of the immense inner column create a Gothic atmosphere inside the cathedral.

Inside the cathedral are the tomb of Francis II, Duke of Brittany (position 10) and of his wife Marguerite de Foix, the (parents of Anne of Brittany), made at the beginning of the 16th century by Michel Colombe and Jean Perréal. The cathedral also houses the cenotaph of General de Lamoricière (position 23), a monument set up in 1878 in papal homage to him.

In front of the cathedral, on 5 September 1661, on the order of Louis XIV, Nicolas Fouquet was arrested by d'Artagnan.