Napoléon François Charles Joseph Bonaparte (20 March 1811 – 22 July 1832), Prince Imperial, King of Rome, known in the Austrian court as Franz from 1814 onward, Duke of Reichstadt from 1818, was the son of Napoleon I, Emperor of the French, and his second wife, Archduchess Marie Louise of Austria.

By Title III, article 9 of the French Constitution of the time, he was Prince Imperial, but he was also known from birth as the King of Rome, which Napoleon I declared was the courtesy title of the heir apparent. His nickname of L'Aiglon ("the Eaglet") was awarded posthumously and was popularized by the Edmond Rostand play, L'Aiglon.

When Napoleon I abdicated on 4 April 1814, he named his son as Emperor. However, the coalition partners that had defeated him refused to acknowledge his son as successor, thus Napoleon I was forced to abdicate unconditionally a number of days later. Although Napoleon II never actually ruled France, he was briefly the titular Emperor of the French in 1815 after the fall of his father. When his cousin Louis-Napoléon Bonaparte became the next emperor by founding the Second French Empire in 1852, he called himself Napoleon III to acknowledge Napoleon II and his brief reign. 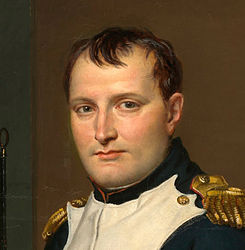 Napoleon's father, Napoleon I, Emperor of the French 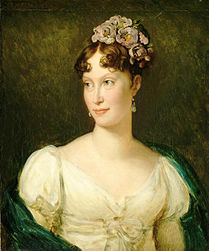 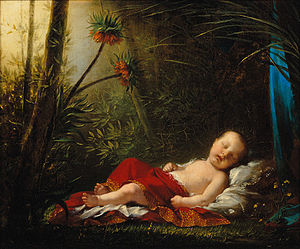 Napoleon The King of Rome, as an infant, by Pierre-Paul Prud'hon

Napoleon was born on 20 March 1811 at the Tuileries Palace, son of Napoleon I and Empress Marie Louise. He was ondoyed (a traditional French ceremony which can relate to a concise baptism) by Joseph Fesch with his full name of Napoleon François Charles Joseph.[1]

The baptism, inspired by the baptismal ceremony of Louis, Grand Dauphin of France, was held on 9 June 1811 in the Notre Dame de Paris cathedral.[1] Karl Philipp, Prince of Schwarzenberg, Austrian ambassador to France, wrote of the baptism:

the baptism ceremony was beautiful and impressive; the scene in which the emperor took the infant from the arms of his noble mother and raised him up twice to reveal him to the public [thus breaking from traditional, as he did at his coronation] was loudly applauded; in the monarch's manner and face could be seen the great satisfaction that he took from this solemn moment.[1]

He was put in the care of Louise Charlotte Françoise Le Tellier de Montesquiou, a descendant of François-Michel le Tellier, Marquis de Louvois, who was named Governess of the Children of France. Affectionate and intelligent, the governess assembled a considerable collection of books intended to give the infant a strong grounding in religion, philosophy and military matters.[1]

As the eldest legitimate son of Napoleon I, he was already constitutionally the Prince Imperial and heir apparent, but the Emperor also gave his son the style of King of Rome. Three years later, the First French Empire, to which he was the heir, collapsed.

Napoleon saw his second wife and their son for the last time on 24 January 1814.[2] On 4 April 1814, Napoleon abdicated in favour of his toddler son after the Six Days' Campaign and the Battle of Paris. The three-year-old became Emperor of the French under the regnal name of Napoleon II. However, on 6 April 1814, Napoleon I fully abdicated and renounced not only his own rights to the French throne, but also those of his descendants. The Treaty of Fontainebleau in 1814 gave the child the right to use the title of Prince of Parma, of Placentia, and of Guastalla, and his mother was styled the Duchess of Parma, of Placentia, and of Guastalla. 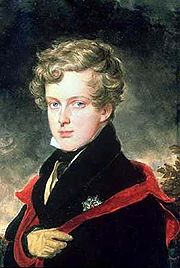 On 29 March 1814, accompanied by her suite, Marie Louise left the Tuileries Palace with her son. Their first stop was the Château de Rambouillet; then, fearing the advancing enemy troops, they continued on to the Château de Blois. On 13 April, with her suite much diminished, Marie Louise and her three-year-old son were back in Rambouillet, where they met her father, the Emperor Francis I of Austria, and the Emperor Alexander I of Russia. On 23 April, escorted by an Austrian regiment, mother and son left Rambouillet and France forever, for their exile in Austria.[3]

In 1815, after his defeat at Waterloo, Napoleon I abdicated for the second time in favour of his four-year-old son, whom he had not seen since his exile to Elba. The day after Napoleon's abdication, a Commission of Government of five members took the rule of France,[4] awaiting the return of King Louis XVIII, who was in Le Cateau-Cambrésis.[5] The Commission held power for two weeks, but never formally summoned Napoleon II as Emperor or appointed a regent. The entrance of the Allies into Paris on 7 July brought a rapid end to his supporters' wishes. Napoleon II was residing in Austria with his mother and was probably never aware at the time that he had been proclaimed Emperor on his father's abdication.

The next Bonaparte to ascend the throne of France would be Louis-Napoleon, the son of Napoleon's brother Louis I, King of Holland, in 1852. He took the regnal name of Napoleon III. 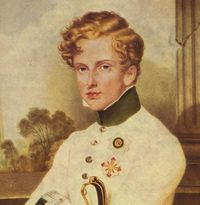 From the spring of 1814 onwards, Napoleon lived in Austria and was known as "Franz", his second given name. In 1818, he was awarded the title of Duke of Reichstadt by his maternal grandfather, Emperor Francis. He was educated by a staff of military tutors and developed a passion for soldiering, dressing in a miniature uniform like his father's and performing maneuvers in the palace. At the age of 8, it was apparent to his tutors that he had chosen his career.

By 1820, Napoleon had completed his elementary studies and begun his military training, learning German, Italian and math as well as receiving advanced physical training. His official army career began at age 12, in 1823, when he was made a cadet in the Austrian Army. Accounts from his tutors describe Napoleon as intelligent, serious and focused. Additionally, he was a very tall young man: he had grown to nearly 6 feet by the time he was 17.

His budding military career gave some concern and fascination to the monarchies of Europe and French leaders over his possible return to France. However, he was allowed to play no political role and instead was used by Austrian Chancellor Klemens von Metternich in bargaining with France to gain advantage for Austria. Fearful of anyone in the Bonaparte family regaining political power, Metternich even rejected a request for Franz to move to warmer climate in Italy. He received another rejection when his grandfather refused to allow him to be part of the army traveling to Italy to put down a rebellion.[6]

Upon the death of his stepfather, Adam Albert von Neipperg, and the revelation that his mother had borne two illegitimate children to him prior to their marriage, Franz grew distant with his mother and felt that his Austrian family were holding him back to avoid political controversy. He said to his friend, Anton von Prokesch-Osten, "If Josephine had been my mother, my father would not have been buried at Saint Helena, and I should not be at Vienna. My mother is kind but weak; she was not the wife my father deserved".[7] 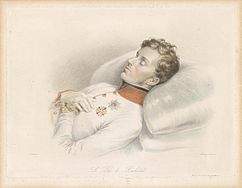 Portrait on his death bed, engraved by Franz Xaver Stöber

In 1831, Franz was given command of an Austrian battalion, but he never got the chance to serve in any meaningful capacity. In 1832, he caught pneumonia and was bedridden for several months. His poor health eventually overtook him and on July 22, 1832, Franz died of tuberculosis at Schönbrunn Palace in Vienna.[8] He left no issue, thus the Napoleonic claim to the throne of France was taken over by his cousin, Louis-Napoléon Bonaparte, who later successfully restored the empire as Napoleon III.

Disposition of his remains 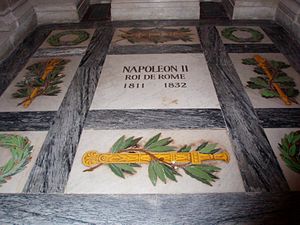 While most of his remains were transferred to Paris, his heart and intestines remained in Vienna, which is traditional for members of the Habsburg house. They are in Urn 42 in the "Heart Crypt" (Herzgruft) and his viscera are in Urn 76 of the Ducal Crypt.

He was noted for his friendship with Sophie, a Bavarian princess of the House of Wittelsbach.[13] Intelligent, ambitious and strong-willed, Sophie had little in common with her husband Franz Karl. There were rumors of a relationship between Sophie and Franz, as well as the possibility that Sophie's second son Maximilian I of Mexico (born 1832) was the result of their reciprocal involvement.