From Infogalactic: the planetary knowledge core
Jump to: navigation, search
For the town in Ecuador also known by this name, see Nobol.

Narcisa de Jesús Martillo y Morán (29 October 1832 – 8 December 1869) is a Roman Catholic saint from Nobol, Ecuador. She was a laywoman known for her charitable giving and strict devotion, becoming a lay hermit.[1] She was beatified by Pope John Paul II on October 25, 1992 and canonized on October 12, 2008 by Pope Benedict XVI.[2] Today her body lies in repose at the Santuario de Santa Narcisa de Jesús Martillo y Morán in Nobol, Ecuador. Her feast day is August 30.

Narcisa de Jesús Martillo was born on October 29, 1832 in the small village of St. Joseph in Nobol, Daule, Ecuador.[3] She was the sixth of nine children born to Peter Martillo and Josephine Morán, who were wealthy landowners. Her mother died in 1838 when she was the age of six and as result took up much of the domestic chores. She had a clear perception of her call to sanctity from an early age and was confirmed on September 16, 1839 at the age of seven.[3] She frequented a small wood near her home for prayer and contemplation in solitude. The guayabo tree near which she prayed, is today the destination for large pilgrimages.[3] She chose Saint Mariana de Jesus as her patron with whom she identified and strived to imitate.

After her father died in 1852, Narcisa moved to Guayaquil at the age of 19 where she lived with a very prominent family. It is here where Narcisa began her mission of helping the poor and the sick and caring for abandoned children.[4] She took a job as a seamstress to fund her mission as well as supporting her eight brothers and sisters. Narcisa then moved to the city of Cuenca where she went from home to home, living with whoever would take her including the Blessed Mercedes de Jesús Molina to allow herself greater privacy for prayer and penance.[3]

In June 1868, Narcisa moved to Lima, Peru at the advice of a Franciscan, where she lived as a lay person in the Dominican convent of Patrocinio.[3] Here, Narcisa followed a demanding daily schedule of eight hours of prayer, offered in silence and solitude.[1] In addition, she devoted four hours of the night to various forms of mortification, including flagellation and the wearing of a crown of thorns.[1] She fasted on bread and water and took the Eucharist as her only forms of sustenance[3] and was frequently seen in a state of ecstasy.[1] Towards the end of 1869, Narcisa developed high fevers for which medical remedies could do little.[3] She died on December 8, 1869. 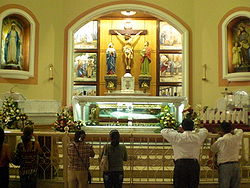 Following Narcisa's death, the city of Lima acclaimed her as a saint, as did the people of Guayaquil and Nobol.[3] The Dominican sisters of Patrocinio venerated her by guarding the memory of her virtues and careful preservation of her body. In 1955, her practically uncorrupted body was transferred from Peru to Guayaquil, and in 1972 her remains were returned to Nobol.[4] The documents of the diocesan process of canonization were handed over to the Congregation for the Causes of Saints in 1964. Pope John Paul II beatified her on October 25, 1992. On August 22, 1998, a shrine in her honour was dedicated in Nobol, where her uncorrupt body remains to this day.

On January 19, 2007, the Congregation voted in favor of recognizing a miracle that took place through the then Blessed Narcisa’s intercession, an important step in the canonization process. The case that was brought forth was that of Edelmina Arellano, who was cured from a congenital defect in 1992 and was determined to be “unforeseen, complete, lasting, and scientifically inexplicable.” Edelmina was born without genital organs, and at the age of 7 she was inexplicably cured after her mother took her to the shrine dedicated to Narcisa and prayed for her intercession. Later the same day, the child had an appointment with her doctor who testified that, suddenly and without any medical explanation, the girl was completely normal.[4]