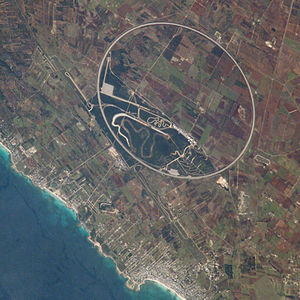 The Nardò Ring, originally known as Pista di prova di Nardò della Fiat (Fiat's Nardò test track) when it was built in 1975, is a high speed test track located at more than 20 kilometres (12 mi) north-west of the town of Nardò, Italy, in the southern region of Apulia, in the province of Lecce. It was acquired by Porsche Engineering in 2012 from its former owners, Prototipo SpA.[1] Porsche now call the site Nardò Technical Center.

The track is 12.5 kilometres (7.8 mi) long[2] and is round, has four lanes for cars and motorcycles totaling 16 metres (52 ft) in width and has a separate inner ring for trucks at a width of 9 metres (30 ft). In the cars/motorcycle ring the lanes are banked at such a degree that a driver in the outer most lane doesn't need to turn the wheel while driving at speeds of up to 240 km/h (149 mph). In essence, at the so-called neutral speed which is different for the four lanes, one can drive as if in a straight lane. However extremely fast cars still require the steering wheel to be turned when going faster than the maximum neutral speed. For example the Koenigsegg CCR which set a speed record for a production car at the Nardò Ring did so with the steering wheel at a 30° angle. This speed record has since been beaten by the Bugatti Veyron at Volkswagen Group's private Ehra-Lessien straight line test track in Germany, and hence the CCR only holds the speed record for the Nardò Ring. In the process of fighting a turn as needed when going faster than the neutral speed quite a bit of potential top speed is lost and hence a fast car will go faster in a straight line than what is possible on the Nardó Ring. Even at the neutral speed, in a banked turn a car runs a bit heavier than it would in a straight line, since the downforce created by the banking increases the rolling resistance on the tires. There has been one fatality at the ring.

The neutral speed for the four car/motorcycle lanes are respectively:[3]

During regular weekly working activity the maximum speed allowed on the circular track is 240 km/h (149 mph). Higher speeds are only allowed at times when a client gets the track for its exclusive use.

The track was featured in British TV series Top Gear in the series 18 opener, when Jeremy Clarkson, Richard Hammond and James May drove in a Lamborghini Aventador, a Noble M600 and a McLaren MP4-12C, respectively, to see who could reach the highest speed.