Narrative of the Life of Frederick Douglass, an American Slave 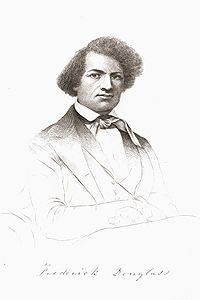 Narrative of the Life of Frederick Douglass is an 1845 memoir and treatise on abolition written by famous orator and former slave Frederick Douglass. It is generally held to be the most famous of a number of narratives written by former slaves during the same period. In factual detail, the text describes the events of his life and is considered to be one of the most influential pieces of literature to fuel the abolitionist movement of the early 19th century in the United States.

Narrative of the Life of Frederick Douglass encompasses eleven chapters that recount Douglass' life as a slave and his ambition to become a free man.

Douglass begins by explaining that he does not know the date of his birth (February 3, 1818), and that his mother died when he was 7 years old. He has very few memories of her (children were commonly separated from their mothers), only of the rare night time visit. He thinks his father is a white man, possibly his owner. At a very early age he sees his Aunt Hester being whipped. Douglass details the cruel interaction that occurs between slaves and slave holders, as well as how slaves are supposed to behave in the presence of their masters, and that even when Douglass says that fear is what kept many slaves where they were, when they tell the truth they are punished by their owners.

At this point in the Narrative, Douglass is moved to Baltimore, Maryland. This is rather important for him because he believes that if he had not been moved, he would have remained a slave his entire life. He even starts to have hope for a better life in the future. At this point, he discusses his new mistress, Mrs. Sophia Auld, who begins as a very kind woman but eventually turns cruel. Douglass learns the alphabet and how to spell small words from this woman, but her husband, Mr. Auld, disapproves, and states that if slaves could read, they will not be fit to be a slave, being unmanageable and sad. Upon hearing why Mr. Auld disapproves of slaves being taught how to read, Douglass realizes the importance of reading and the possibilities that this skill could help him. He takes it upon himself to learn how to read and learn all he can, but at times, this newfound skill torments him. Douglass then gains an understanding of the word abolition and develops the idea to run away to the North. He also learns how to write and how to read well.

At the age of ten or eleven, Douglass' master dies and his property is left to be divided between his son and daughter. The slaves are valued along with the livestock, causing Douglass to develop a new hatred of slavery. He feels lucky when he is sent back to Baltimore to live with the family of Master Hugh.

He is then moved through a few more situations before he is sent to St. Michael's. His regret at not having attempted to run away is evident, but on his voyage he makes a mental note that he traveled in the North-Easterly direction and considers this information to be of extreme importance. For some time, he lives with Master Thomas Auld who is particularly cruel, even after attending a Methodist camp. He is pleased when he eventually is lent to Mr. Covey for a year, simply because he would be fed. Mr. Covey is known as a "negro-breaker," who breaks the will of slaves.

While under the control of Mr. Covey, Frederick Douglass bit his hand and has an especially hard time at the tasks required of him. He is harshly whipped almost on a weekly basis, apparently due to his awkwardness. He is worked and was beaten to exhaustion, which finally causes him to collapse one day while working in the fields. Because of this, he is brutally beaten once more by Covey, and eventually complains to Thomas Auld, who subsequently sends him back to Covey. A few days later, Covey attempts to tie up Douglass, but he fights back. After a two-hour long physical battle, Douglass ultimately conquers Covey. After this fight, he is never beaten again. Douglass is not punished by the law, which is believed to be due to the fact that Covey cherishes his reputation as a "negro-breaker," which would be jeopardized if others knew what happened. He is sent to live on another plantation where he befriends other slaves and teaches them how to read. He and the others make a plan to escape, but before doing so, they are caught and Douglass is put in jail. After he was released 2 years later, he is sent to Baltimore once more, but this time to learn a trade. He becomes an apprentice in a shipyard where he is disliked by several white apprentices due to his race; at one point he gets into a fight with them and they nearly gouge out his left eye. When this happens, Douglass goes to Master Hugh, who is kind regarding this situation and refuses to let Douglass return to the shipyard. Master Hugh tries to find a lawyer but all refuse, saying they can only do something for a white person. Sophia Auld, who had turned cruel under the influence of slavery, feels pity for Douglass and tends to the wound at his left eye until he is healed. At this point, Douglass is employed to be a caller and receives wages, but is forced to give every cent to Master Auld in due time. Douglass eventually finds his own job and plans the date in which he will escape to the North. He succeeds but does not give details of how he does so in order to protect those who helped him, and to ensure the possibility of other slaves escape. At this point Douglass unites with his fiancée and begins working as his own master. He attends an anti-slavery convention and eventually becomes a well known orator and abolitionist 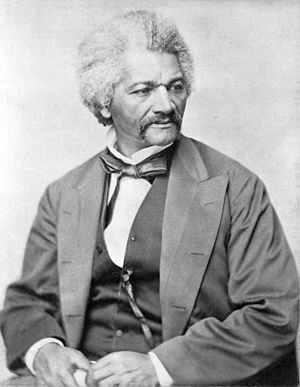 The Narrative of the Life of Frederick Douglass was published on May 1, 1845, and within four months of this publication, five thousand copies were sold. By 1860, almost 30,000 copies were sold.[1] After publication, he sailed to England and Ireland for two years in fear of being recaptured by his owner in the United States. While in Britain and Ireland, he gained supporters who paid $710.96 to purchase his emancipation from his legal owner. One of the more significant reasons Douglass published his Narrative was to offset the demeaning manner in which white people viewed him. When he spoke in public, his white abolitionist associates established limits to what he could say on the platform. More specifically, they did not want him to analyze the current slavery issues or to shape the future for black people. However, once Narrative of the Life of Frederick Douglass was published, he was given the liberty to begin more ambitious work on the issue rather than giving the same speeches repetitively. Because of the work in his Narrative, Douglass gained significant credibility from those who previously did not believe the story of his past. While in Ireland the Dublin edition of the book was published by the abolitionist printer Richard D. Webb to great acclaim and Douglass would write extensively in later editions very positively about his experience in Ireland. His newfound liberty on the platform eventually led him to start a black newspaper against the advice of his "fellow" abolitionists. The publication of Narrative of the Life of Frederick Douglass opened several doors, not only for Douglass' ambitious work, but also for the anti-slavery movement of that time.

Reactions to the text

Narrative of the Life of Frederick Douglass received many positive reviews, but there was a group of people who opposed Douglass' work. One of his biggest critics, A. C. C. Thompson, was a neighbor of Thomas Auld, who was the master of Douglass for some time. As seen in "Letter from a Slave Holder" by A. C. C. Thompson, found in the Norton Critical Edition of Narrative of the Life of Frederick Douglass, An American Slave, he claimed that the slave he knew was "an unlearned, and rather an ordinary negro." Thompson was confident that Douglass "was not capable of writing the Narrative." He also refuted the Narrative when Douglass described the various cruel white slave holders that he either knew or knew of. Prior to the publication of Narrative of the Life of Frederick Douglass, the public could not fathom how it was possible for a former slave to appear to be so educated. Upon listening to his oratory, many were skeptical of the stories he told. After Douglass' publication, however, the public was swayed.[2] Many[who?] viewed his text as an affirmation of what he spoke of publicly. Also found in The Norton Critical Edition, Margaret Fuller, a very prominent book reviewer and literary critic of that era, had a very positive opinion of Douglass' work. She claimed, "we have never read [a narrative] more simple, true, coherent, and warm with genuine feeling."[3] She described the preface in which two white men wrote on behalf of Douglass, establishing his credibility in the eyes of the public. She also suggested that "every one may read his book and see what a mind might have been stifled in bondage - what a man may be subjected to the insults of spendthrift dandies, or the blows of mercenary brutes, in whom there is no whiteness except of the skin, no humanity in the outward form . . ." Douglass' work in this Narrative was an influential piece of literature in the anti-slavery movement.[citation needed]