From Infogalactic: the planetary knowledge core
Jump to: navigation, search
Emperor of JapanTemplate:SHORTDESC:Emperor of Japan
This article is about the Emperor of Japan. For other people with this name, see Naruhito (given name).

Naruhito (徳仁?, pronounced [naɾɯçi̥to]; born 23 February 1960) is the Emperor of Japan. He acceded to the Chrysanthemum Throne on 1 May 2019, beginning the Reiwa era, following the abdication of his father, Emperor Akihito.[1] He is the 126th monarch according to Japan's traditional order of succession.

In Japan, the Emperor is never referred to by his given name, but rather is referred to as "His Majesty the Emperor" (天皇陛下, Tennō Heika?) which may be shortened to "His Majesty" (陛下, Heika?).[2] In writing, the Emperor is also referred to formally as "The Reigning Emperor" (今上天皇, Kinjō Tennō?). The era of Naruhito's reign bears the name "Reiwa" (令和?), and according to custom he will be renamed Emperor Reiwa (令和天皇, Reiwa Tennō?, see "posthumous name") by order of the Cabinet after his death. The name of the next era under his successor will be established after his death or before his abdication.[3] 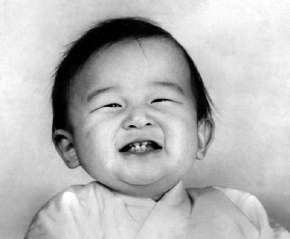 Naruhito was born on 23 February 1960 at 4:15 p.m. in the Imperial Household Agency Hospital in Tokyo Imperial Palace.[4] As a prince, he later quipped, "I was born in a barn inside the moat".[5] His mother is a convert to Shinto from Roman Catholicism. Before Naruhito's birth, the announcement of the then Crown Prince Akihito's engagement and marriage to Michiko Shōda (later Empress Michiko) had drawn opposition from traditionalist groups, because Michiko came from a Roman Catholic family.[6] Although she was never baptized, she was educated in Catholic schools and seemed to share the faith of her parents. Rumors also speculated that Empress Kōjun had opposed the engagement. After the death of Naruhito's paternal grandmother Empress Kōjun in 2000, Reuters reported that she had been one of the strongest opponents of her son's marriage, and that in the 1960s, she had driven her daughter-in-law and grandchildren to depression by persistently accusing her of not being suitable for her son.[7]

Naruhito's childhood was reported to be happy, and he enjoyed activities such as mountain climbing, riding and learning the violin. He played with the children of the royal chamberlain, and he was a fan of the Yomiuri Giants in the Central League, his favorite player being No. 3, later team manager, Shigeo Nagashima. One day, Naruhito found the remains of an ancient roadway in the palace grounds, sparking a lifelong fascination with the history of transportation, which would provide the subject of his bachelor's and master's degrees in history.[8] He later said, "I have had a keen interest in roads since childhood. On roads you can go to the unknown world. Since I have been leading a life where I have few chances to go out freely, roads are a precious bridge to the unknown world, so to speak."[9]

In August 1974, when the prince was 14, he was sent to Melbourne, Australia, for a homestay. Naruhito's father, then the Crown Prince Akihito, had had a positive experience there on a trip the year before, and encouraged his son to go as well.[10] He stayed with the family of businessman Colin Harper.[11] He got along with his host brothers, riding around Point Lonsdale, playing the violin and tennis, and climbing Uluru together.[12] Once he even played the violin for dignitaries at a state dinner at Government House hosted by Governor-General Sir John Kerr.[13]

When Naruhito was four years old he was enrolled in the prestigious Gakushūin school system, where many of Japan's elite families and narikin (nouveaux riches) send their children.[14] In senior high, Naruhito joined the geography club.[15]

Naruhito graduated from Gakushuin University in March 1982 with a Bachelor of Letters degree in history.[16] In July 1983 he entered a three-month intensive English course before entering Merton College, Oxford University, in the United Kingdom,[17] where he studied until 1986. Naruhito did not, however, submit his thesis A Study of Navigation and Traffic on the Upper Thames in the 18th Century until 1989.[18] He later revisited these years in his book, The Thames and I – a Memoir of Two Years at Oxford. He visited some 21 historic pubs, including the Trout Inn.[19] Naruhito joined the Japan Society and the drama society, and became the honorary president of the karate and judo clubs.[20] He played inter-college tennis, seeded number three out of six on the Merton team,[20] and took golf lessons from a pro.[20] In his three years at Merton he also climbed the highest peaks in three of the constituent countries of the United Kingdom: Scotland's Ben Nevis, Wales' Snowdon and Scafell Pike in England.[21]

While at Oxford, Naruhito also was able to go sightseeing across Europe and meet much of its royalty, including the British royal family.[21] The relatively relaxed manners of the United Kingdom's royals amazed him: "Queen Elizabeth II, he noted with surprise, poured her own tea and served the sandwiches."[22] He also went skiing with Liechtenstein's Prince Hans-Adam II, holidayed in Mallorca in the Mediterranean with King Juan Carlos I, and sailed with Norway's Crown Prince Harald and Crown Princess Sonja and Queen Beatrix of the Netherlands.[23]

Upon his return to Japan, Naruhito enrolled once more in Gakushūin University to earn a Master of Humanities degree in history, successfully earning his degree in 1988.[24]

File:President Trump Attends a State Banquet at the Imperial Palace (47945532937) (cropped).jpg
Naruhito and Masako in May 2019

Naruhito first met Masako Owada at a tea for Infanta Elena, Duchess of Lugo in November 1986,[25][20] during her studies at the University of Tokyo. The prince was immediately captivated by her,[26] and arranged for them to meet several times over the next few weeks.[27] Because of this, they were pursued relentlessly by the press throughout 1987.[28]

Despite the Imperial Household Agency's disapproval of Masako, and her attending Balliol College, Oxford, for the next two years, Naruhito remained interested in Masako. He proposed to her three times before the Imperial Palace and announced their engagement on 19 January 1993. The wedding took place on 9 June the same year at the Imperial Shinto Hall in Tokyo before 800 invited guests, including many of Europe's heads of state and royalty.[29]

By the time of their marriage, Naruhito's grandfather Emperor Shōwa (Hirohito) had died, and so on 23 February 1991, Naruhito had been invested as the Crown Prince with the title Prince Hiro (浩宮 , Hiro-no-miya?).[30]

Naruhito is interested in water policy and water conservation. In March 2003, in his capacity as honorary president of the Third World Water Forum, he delivered a speech at the forum's opening ceremony titled "Waterways Connecting Kyoto and Local Regions". Visiting Mexico in March 2006, he gave the keynote address at the opening ceremony for the Fourth World Water Forum, "Edo and Water Transport". And in December 2007, he gave a commemorative talk at the opening ceremony for the First Asia-Pacific Water Summit, "Humans and Water: From Japan to the Asia-Pacific Region".[30]

Naruhito plays the viola, having switched from the violin because he thought the latter "too much of a leader, too prominent" to suit his musical and personal tastes.[34] He enjoys jogging, hiking, and mountaineering in his spare time.[13]

Naruhito is an honorary member of the World Commission on Water for the 21st century and patron of the Global Water Partnership, established by the World Bank, the United Nations, and the Swedish Agency of Development.[citation needed]

The Crown Prince was a patron of the Japanese Olympic Games Committee. The prince is also a supporter of the World Organization of the Scout Movement and in 2006 attended the 14th Nippon Jamboree, the Japanese national jamboree organized by the Scout Association of Japan. The crown prince has also been an honorary vice-president of the Japanese Red Cross Society since 1994.[30]

For two weeks in 2012, Naruhito temporarily took charge of his father's duties while the Emperor underwent and recovered from heart bypass surgery.[35]

Naruhito's birthday was named "Mount Fuji Day" by Shizuoka and Yamanashi Prefectures because of his reported love of the mountain.[36]

Following an abdication ceremony on the afternoon of 30 April, Akihito's reign and the Heisei era continued until the end of the day. Naruhito then succeeded him as emperor at the beginning of the day on 1 May, ushering in the Reiwa era. The transition took place at midnight. Naruhito's place as emperor was formalized in a ceremony on the morning of 1 May. In his first statement as emperor, he pledged to reflect deeply on the course followed by his father, and fulfill his responsibility "as the symbol of the state and of the unity of the people of Japan".[1]

Naruhito's enthronement ceremony took place on 22 October 2019,[39] where he was duly enthroned in an ancient-style proclamation ceremony.[40] 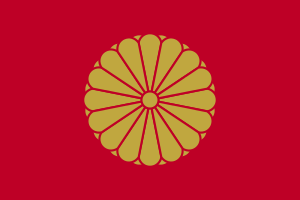 Imperial Standard of the Emperor

See also: List of honours of the Japanese imperial family by country

Template:Sovereigns of monarchies Template:Grand Commander of the Order of the Defender of the Realm Template:Current G8 Heads of State