Naselle Air Force Station was one of twenty-eight stations built as part of the second segment of the Air Defense Command permanent radar network. Prompted by the start of the Korean War, on July 11, 1950, the Secretary of the Air Force asked the Secretary of Defense for approval to expedite construction of the permanent network. Receiving the Defense Secretary’s approval on July 21, the Air Force directed the Corps of Engineers to proceed with construction at the site. The radars being located on a mountain peak about 4 miles north of Naselle, Washington; the station and support facilities being located at the base of the mountain. Some of the original buildings still stand and are part of Naselle Youth Camp, a state operated forestry camp for juvenile inmates.

The 759th Aircraft Control and Warning Squadron (AC&W Sq) was assigned to Naselle AFS on 27 November 1950. The squadron began operating AN/FPS-3 long-range search and AN/FPS-5 height-finder radars, which allowed for the closing of the temporary "Lashup" sites at Fort Stevens, OR (L-36), and Pacific Beach, WA (L-35), which had been operated beginning in September 1950. Initially the station functioned as a Ground-Control Intercept (GCI) and warning station. As a GCI station, the squadron's role was to guide interceptor aircraft toward unidentified intruders picked up on the unit's radar scopes.

In February 1960 Naselle AFS joined the Semi Automatic Ground Environment (SAGE) system, feeding data to DC-12 at McChord AFB, Washington. After joining, the squadron was redesignated as the 759th Radar Squadron (SAGE) on 1 April. The radar squadron provided information 24/7 the SAGE Direction Center where it was analyzed to determine range, direction altitude speed and whether or not aircraft were friendly or hostile. On 31 July 1963, the site was redesignated as NORAD ID Z-57. In 1965 an AN/FPS-26A height-finder was added to the site. The AN/FPS-6A was retired in early 1966.

Naselle Air Force Station was closed on 30 June 1966 due to budget reductions, and the squadron was inactivated. Today, the radar site is now a commercial transmitter site. The original Air Force station facilities (Lashup site) have been incorporated into the Fort Stevens Historic Site, the latter converted into Washington State operated Naselle Youth Camp. 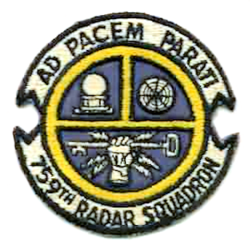 Emblem of the 759th Radar Squadron