From Infogalactic: the planetary knowledge core
(Redirected from Nasrudin)
Jump to: navigation, search
For other people with similar names, see Nasir al-Din.
File:Nasreddin.jpg
A 17th century miniature of Nasreddin, currently in the Topkapı Palace Museum Library.

Nasreddin /næsˈrɛdᵻn/[1] was a Seljuq satirical Sufi, believed to have lived and died during the 13th century in Akşehir, near Konya, a capital of the Seljuk Sultanate of Rum, in today's Turkey. He is considered a populist philosopher and wise man, remembered for his funny stories and anecdotes.[2] He appears in thousands of stories, sometimes witty, sometimes wise, but often, too, a fool or the butt of a joke. A Nasreddin story usually has a subtle humour and a pedagogic nature.[3] The International Nasreddin Hodja fest is celebrated between 5 and 10 July in his hometown every year.[4]

Claims about his origin are made by many ethnic groups.[5][6] Many sources give the birthplace of Nasreddin as Hortu Village in Sivrihisar, Eskişehir Province, present-day Turkey, in the 13th century, after which he settled in Akşehir,[6] and later in Konya under the Seljuq rule, where he died in 1275/6 or 1285/6 CE.[7][8] The alleged tomb of Nasreddin is in Akşehir[9] and the "International Nasreddin Hodja Festival" is held annually in Akşehir between 5–10 July.[10]

According to Prof. Mikail Bayram who made an extensive research on Nasreddin, his full name is Nasir ud-din Mahmood al-Khoyi, his title Ahi Evran (as being the leader of the ahi organization). According to him, Nasreddin was born in the city of Khoy in West Azerbaijan Province of Iran, had his education in Khorasan and became the pupil of famous Quran mufassir Fakhr al-Din al-Razi in Herat. He was sent to Anatolia by the Khalif in Baghdad to organize resistance and uprising against the Mongol invasion. He served as a kadı (an Islamic judge and ombudsman) in Kayseri. This explains why he addresses judicial problems in the jokes not only religious ones. During the turmoil of the Mongol invasion he became a political opponent of Persian Rumi. He was addressed in Masnavi by juha anecdotes for this reason. He became the vazir at the court of Kaykaus II.Having lived in numerous cities in vast area and being steadfastly against the Mongol invasion as well as having his witty character, he was embraced by various nations and cultures from Turkey to Arabia, from Persia to Afghanistan, and from Russia to China, most of which suffered from those invasions.

As generations have gone by, new stories have been added to the Nasreddin corpus, others have been modified, and he and his tales have spread to many regions. The themes in the tales have become part of the folklore of a number of nations and express the national imaginations of a variety of cultures. Although most of them depict Nasreddin in an early small-village setting, the tales deal with concepts that have a certain timelessness. They purvey a pithy folk wisdom that triumphs over all trials and tribulations. The oldest manuscript of Nasreddin dates to 1571.

Today, Nasreddin stories are told in a wide variety of regions, especially across the Muslim world and have been translated into many languages. Some regions independently developed a character similar to Nasreddin, and the stories have become part of a larger whole. In many regions, Nasreddin is a major part of the culture, and is quoted or alluded to frequently in daily life. Since there are thousands of different Nasreddin stories, one can be found to fit almost any occasion.[11] Nasreddin often appears as a whimsical character of a large Persian, Albanian, Armenian, Azerbaijani, Bengali, Bosnian, Bulgarian, Chinese, Greek, Gujarati, Hindi, Judeo-Spanish, Kurdish, Romanian, Serbian, Russian, and Urdu folk tradition of vignettes, not entirely different from zen koans.

Some people say that, whilst uttering what seemed madness, he was, in reality, divinely inspired, and that it was not madness but wisdom that he uttered. 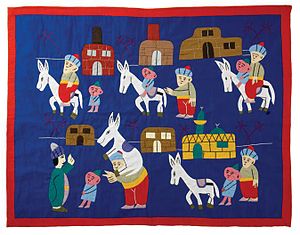 A Goha story cloth by Ahmed Yossery (2007) depicting a version of The miller, his son and the donkey, The Children’s Museum of Indianapolis

Many peoples of the Near, Middle East and Central Asia claim Nasreddin as their own (e.g., Turks,[2][7][14][15] Afghans,[14] Iranians,[2][16] and Uzbeks).[8] His name is spelt in a wide variety of ways: Nasrudeen, Nasrudin, Nasruddin, Nasr ud-Din, Nasredin, Naseeruddin, Nasr Eddin, Nastradhin, Nasreddine, Nastratin, Nusrettin, Nasrettin, Nostradin, Nastradin (lit.: Victory of the Deen) and Nazaruddin. It is sometime preceded or followed by a title or honorific used in the corresponding cultures: "Hoxha", "Khwaje", "Hodja", "Hoja", "Hojja", "Hodscha", "Hodža", "Hoca", "Hogea", "Mullah", "Mulla", "Mula", "Molla", "Efendi", "Afandi", "Ependi" (أفندي ’afandī), "Hajji". In several cultures he is named by the title alone.

In Arabic-speaking countries this character is known as "Juha", "Djoha", "Djuha", "Dschuha", "Giufà", "Chotzas", "Goha" (جحا juḥā). Juha was originally a separate folk character found in Arabic literature as early as the 9th century, and was widely popular by the 11th century.[17] Lore of the two characters became amalgamated in the 19th century when collections were translated from Arabic into Turkish and Persian.[18]

In the Swahili and Indonesian culture, many of his stories are being told under the name of "Abunuwasi" or "Abunawas", though this confuses Nasreddin with an entirely different man – the poet Abu Nuwas, known for homoerotic verse.

In China, where stories of him are well known, he is known by the various transliterations from his Uyghur name, 阿凡提 (Āfántí) and 阿方提 (Āfāngtí). The Uyghurs believe that he was from Xinjiang, while the Uzbeks believe he was from Bukhara.[19] Shanghai Animation Film Studio produced a 13-episode Nasreddin related animation called 'The Story of Afanti'/ 阿凡提 (电影) in 1979, which became one of the most influential animations in China's history. The musical Nasirdin Apandim features the legend of Nasreddin effendi ("sir, lord"), largely sourced from Uighur folklore.

In Central Asia, he is commonly known as "Afandi". The Central Asian peoples also claim his local origin, as do Uyghurs.

The Nasreddin stories are known throughout the Middle East and have touched cultures around the world. Superficially, most of the Nasreddin stories may be told as jokes or humorous anecdotes. They are told and retold endlessly in the teahouses and caravanserais of Asia and can be heard in homes and on the radio. But it is inherent in a Nasreddin story that it may be understood at many levels. There is the joke, followed by a moral and usually the little extra which brings the consciousness of the potential mystic a little further on the way to realization.[20]

Whom do you believe? 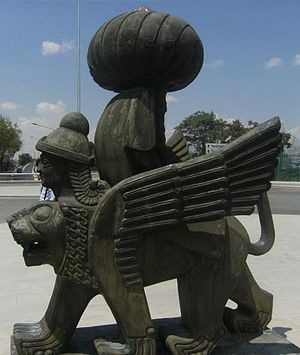 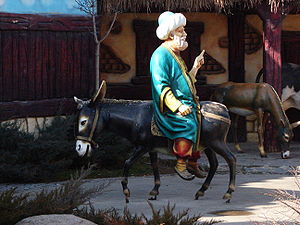 A neighbour came to the gate of Mulla Nasreddin's yard. The Mulla went to meet him outside.
"Would you mind, Mulla," the neighbour asked, "lending me your donkey today? I have some goods to transport to the next town."
The Mulla didn't feel inclined to lend out the animal to that particular man, however. So, not to seem rude, he answered:
"I'm sorry, but I've already lent him to somebody else."
All of a sudden the donkey could be heard braying loudly behind the wall of the yard.
"But Mulla," the neighbour exclaimed. "I can hear it behind that wall!"
"Whom do you believe," the Mulla replied indignantly, "the donkey or your Mulla?"[22]

Some children saw Nasreddin coming from the vineyard with two baskets full of grapes loaded on his donkey. They gathered around him and asked him to give them a taste.
Nasreddin picked up a bunch of grapes and gave each child a grape.
"You have so much, but you gave us so little," the children whined.
"There is no difference whether you have a basketful or a small piece. They all taste the same," Nasreddin answered, and continued on his way.[23]

Nasreddin was walking in the bazaar with a large group of followers. Whatever Nasreddin did, his followers immediately copied. Every few steps Nasreddin would stop and shake his hands in the air, touch his feet and jump up yelling "Hu Hu Hu!". So his followers would also stop and do exactly the same thing.
One of the merchants, who knew Nasreddin, quietly asked him: "What are you doing my old friend? Why are these people imitating you?"
"I have become a Sufi Sheikh," replied Nasreddin. "These are my Murids [spiritual seekers]; I am helping them reach enlightenment!"
"How do you know when they reach enlightenment?"
"That’s the easy part! Every morning I count them. The ones who have left – have reached enlightenment!"
[this quote needs a citation]

One late evening Nasreddin found himself walking home. It was only a very short way and upon arrival he can be seen to be upset about something. Alas, just then a young man comes along and sees the Mullah's distress.
"Mullah, please tell me: What is wrong?"
"Ah, my friend, I seem to have lost my keys. Would you help me search them? I know I had them when I left the tea house."
So, he helps Nasreddin with the search for the keys. For quite a while the man is searching here and there but no keys are to be found. He looks over to Nasreddin and finds him searching only a small area around a street lamp.
"Mullah, why are you only searching there?"
"Why would I search where there is no light?"[24] 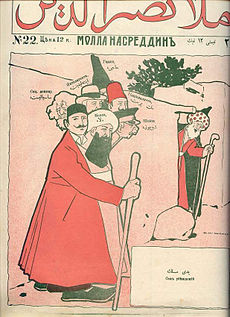 Nasreddin was the main character in a magazine, called simply Molla Nasraddin, published in Azerbaijan and "read across the Muslim world from Morocco to Iran". The eight-page Azerbaijani satirical periodical was published in Tiflis (from 1906 to 1917), Tabriz (in 1921) and Baku (from 1922 to 1931) in the Azeri and occasionally Russian languages. Founded by Jalil Mammadguluzadeh, it depicted inequality, cultural assimilation, and corruption and ridiculed the backward lifestyles and values of clergy and religious fanatics,[25] implicitly calling upon the readers to modernize and accept Western social norms and practices. The magazine was frequently banned[26] but had a lasting influence on Azerbaijani and Iranian literature.[27]

Some Nasreddin tales also appear in collections of Aesop's fables. The miller, his son and the donkey is one example.[28] Others are The Ass with a Burden of Salt (Perry Index 180) and The Satyr and the Traveller.

In some Bulgarian folk tales that originated during the Ottoman period, the name appears as an antagonist to a local wise man, named Sly Peter. In Sicily the same tales involve a man named Giufà.[29] In Sephardi Jewish[30] culture, spread throughout the Ottoman Empire, there is a character that appears in many folk tales named Djohá.[31][32]

In Romanian the existing stories come from a versed compilation edited in 1853 by Anton Pann, a philologist and poet renown for authoring the current Romanian anthem.[33]

Nasreddin is mostly known as a character from short tales, whole novels and stories have later been written and an animated feature film was almost made.[34] In Russia Nasreddin is known mostly because of the novel "Tale of Hodja Nasreddin" written by Leonid Solovyov (English translations: "The Beggar in the Harem: Impudent Adventures in Old Bukhara", 1956, and "The Tale of Hodja Nasreddin: Disturber of the Peace", 2009[35]). The composer Shostakovich celebrated Nasreddin, among other figures, in the second movement (Yumor, "Humor") of his Symphony No. 13. The text, by Yevgeny Yevtushenko, portrays humor as a weapon against dictatorship and tyranny. Shostakovich's music shares many of the "foolish yet profound" qualities of Nasreddin's sayings listed above.[citation needed]

For Uzbek people, Nasreddin is one of their own, and was born and lived in Bukhara.[19] In gatherings, family meetings, and parties they tell each other stories about him that are called "latifa" of "afandi". There are at least two collections of stories related to Nasriddin Afandi.

In 1943, the Soviet film Nasreddin in Bukhara was directed by Yakov Protazanov based on Solovyov's book, followed in 1947 by a film called The Adventures of Nasreddin, directed by Nabi Ganiyev and also set in the Uzbekistan SSR.[37][38]