Nassau /ˈnæsɔː/ is the capital, largest city, and commercial centre of the Commonwealth of the Bahamas. The city has a population of 248,948 (2010 census), 70 percent of the entire population of the Bahamas (353,658). Lynden Pindling International Airport, the major airport for the Bahamas, is located about 16 kilometres (9.9 mi) west of Nassau city centre, and has daily flights to major cities in the United States, the Caribbean, Canada, and the United Kingdom. The city is located on the island of New Providence, which functions much like a business district. Nassau is the site of the House of Assembly and various judicial departments and was considered historically to be a stronghold of pirates.[1] The city was named after Nassau, Germany in honour of William of Orange-Nassau.

Nassau's modern growth began in the late eighteenth century, with the influx of thousands of American Loyalists and their slaves to the Bahamas following the American Revolutionary War. Many of them settled in Nassau (then and still the commerce capital of the Bahamas) and eventually came to outnumber the original inhabitants.

As the population of Nassau grew, so did its populated areas. Today the city dominates the entire island and its satellite, Paradise Island. However, until the post-Second World War era, the outer suburbs scarcely existed. Most of New Providence was uncultivated bush until Loyalists were resettled there following the American Revolutionary War; they established several plantations, such as Clifton and Tusculum. Slaves were imported as labour.

After the British abolished the international slave trade in 1807, they resettled thousands of Africans liberated from slave ships by the Royal Navy on New Providence (at Adelaide Village and Gambier Village), along with other islands such as Grand Bahama, Exuma, Abaco and Inagua. In addition, slaves freed from American ships, such as the Creole case in 1841, were allowed to settle here. The largest concentration of Africans historically lived in the "Over-the-Hill" suburbs of Grants Town and Bain Town to the south of the city of Nassau, while most of the inhabitants of European descent lived on the island's northern coastal ridges.

See also: Piracy in the Caribbean

Nassau was formerly known as Charles Town; it was burned to the ground by the Spanish in 1684. Rebuilt, it was renamed Nassau in 1695 under Governor Nicholas Trott in honour of the Dutch Stadtholder (stadhouder in Dutch) and later also King of England, Scotland and Ireland, William III from the Dutch-German House of Orange-Nassau. The name Nassau derives from the House of Nassau and ultimately from the town of Nassau, Rhineland-Palatinate in Germany.[2] Due to a lack of effective Governors (after Trott), Nassau fell on hard times. In 1703 Spanish and French allied forces briefly occupied Nassau. 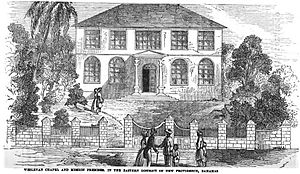 From 1703 to 1718 there was no governor in the colony and by 1713, the sparsely settled Bahamas had become a pirate haven. The Governor of Bermuda stated that there were over 1,000 pirates in Nassau and that they outnumbered the mere hundred inhabitants of the town. They proclaimed Nassau a pirate republic, establishing themselves as "governors." Examples of pirates that used Nassau as their base are Charles Vane, Thomas Barrow, Benjamin Hornigold, Calico Jack Rackham, Anne Bonny, Mary Read, and the infamous Edward Teach, known as "Blackbeard".

In 1718, the British sought to regain control of the islands and appointed Captain Woodes Rogers as Royal governor. He successfully clamped down on the pirates, reformed the civil administration, and restored commerce. Rogers cleaned up Nassau and rebuilt the fort, using his own wealth to try to overcome problems. In 1720 the Spanish made an unsuccessful attempt to capture Nassau.

During the wars in the Thirteen Colonies, Nassau experienced an economic boom. With funds from privateering, a new fort, street lights and over 2300 sumptuous houses were built and Nassau was extended. In addition to this, mosquito breeding swamps were filled.

In 1776 the Battle of Nassau resulted in a brief occupation by American Continental Marines during the American War of Independence, where the Marines staged their first amphibious raid on Fort Montague after attempting to sneak up on Fort Nassau. In 1778 after an overnight invasion, American raiders led by Captain Rathburn, left with ships, gunpowder and military stores after stopping in Nassau for only two days. In 1782 Spain captured Nassau for the last time when Don Juan de Cagigal, governor-general of Cuba, attacked New Providence with 5000 men. Andrew Deveaux, an American Loyalist who resettled on the island, set forth to recapture Nassau with 220 men and 150 muskets to face a force of 600 trained soldiers. Deveaux forced the Spanish to surrender on April 17, 1783, without a single shot fired.

Lord Dunmore governed the colony from 1787 to 1796. He oversaw the construction of Fort Charlotte and Fort Fincastle in Nassau.

During the American Civil War, Nassau served as a port for blockade runners making their way to and from ports along the southern Atlantic Coast for continued trade with the Confederacy. 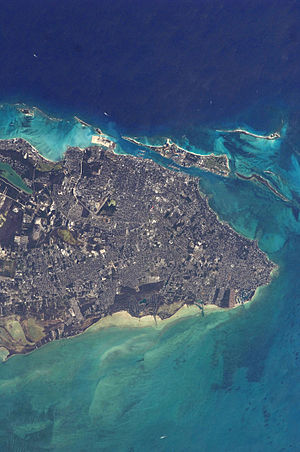 Located on New Providence Island, Nassau has an attractive harbour, a colourful blend of old world and colonial architecture, and a busy port. The tropical climate and natural beauty of the Bahamas have made Nassau a popular tourist destination.

Nassau developed directly behind the port area. New Providence provides 200 km² of relatively flat and low-lying land intersected by low ridges (none of which restricted settlement). In the centre of the island there are several shallow lakes that are tidally connected.

The city's proximity to the United States (290 km east-southeast of Miami, Florida) has contributed to its popularity as a holiday resort, especially after the United States imposed a ban on travel to Cuba in 1963. The Atlantis resort on nearby Paradise Island accounts for more tourist arrivals to the city than any other hotel property. The mega-resort employs over 6,000 Bahamians, and is the largest employer outside government.

Nassau features a tropical monsoon climate with relatively consistent temperatures throughout the course of the year. Summertime temperatures reach about 32 degrees Celsius (90 degrees Fahrenheit) and the winter months have daytime temperatures between 23 and 27 °C (73 and 81 °F), rarely falling below 15 °C (59 °F). 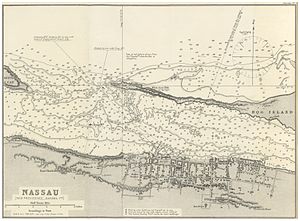 During the 19th century, Nassau became urbanized, attracting rural residents. Growth since the 1950s has been outwards from the town. The 1788 heart of Nassau was just a few blocks of buildings between Government House and the harbour, but the town gradually expanded east to Malcolm's Park, south to Wulff Road, and west to Nassau Street. Grants Town and Bain Town south of the city became the main residential areas for blacks, and until about 30 years ago was the most populous part of the city.

Most whites built houses along the shore, east as far as Fort Montagu, west as far as Saunders Beach, and along the ridge edging the city. During the 20th century, the city spread east to Village Road and west to Fort Charlotte and Oakes Field. This semicircle of residential development was the main area of settlement until after the Second World War, and marks a distinct phase in the city's expansion, the outer boundary to this zone being the effective limit of the continuous built-up area. The wealthier residents continued to spread east (to East End Point) and West (to Lyford Cay).

In the last 40 years, residential development has been quite different. It has consisted mainly of planned middle-income sub-divisions. Since the 1960s, government has sponsored low-cost housing developments at Yellow Elder, Elizabeth Estates, and Pinewood Gardens, in the outer ring.

A view of The Bahamian Parliament

Downtown is the hub for all activities in Nassau. Thousands of people visit daily, to shop, dine, sightsee and to enjoy the tropical climate of the city. While the busiest part of Downtown is the Bay Street thoroughfare and the Woodes Rogers Walk, located across the street from the port and parallel to Bay, the area extends for several blocks in each direction. It starts at West Bay, around the Junkanoo Beach area. A few hotels and restaurants are located on West Bay.

Famous historical landmarks are also in the vicinity, including Vendue House, Christ Church Cathedral, and the Nassau Public Library. Although the tourist part of Downtown peters out after about seven blocks, smaller, more local stores are found all the way down Bay Street. At this point, Bay Street becomes East Bay.

The new Straw Market is also a very busy place on a regular day. After the fire in 2001 it has been rebuilt to a new, more modern look. It consists of four sections that lead to Nassau Harbour in the back. Also in that area are many jewelry shops and bars. A next soon to be tourist hub is Pompey Square.

Cable Beach is recognised as the hotel district of Nassau. Five enormous hotels—two of which are all-inclusive—are located on this strip. The area is also known for its dining, the Crystal Palace Casino, and the golden sands of Cable Beach. Most of the area's restaurants are located either in the hotels or across the street. There is little to no nightlife. There is a bit of shopping, most of it located in the Wyndham. The commercial future of Cable Beach is being re-imagined with the development of Baha Mar, a resort and casino project that will bring more than 2,000 hotel rooms and the largest gaming and convention facility in the Caribbean to this section of New Providence Island in spring of 2015 (estimated opening date).

Nassau has a population of 126,500 females and 121,800 males and is home to 59,707 households with an average family size of 4.15 according to the 2000 census.[7][8] Nassau's large population (at least in relation to the remainder of the Bahamas) is the result of waves of immigration from the Family Islands to the capital. Consequently, this has led to the decline in the population of the lesser developed islands and the rapid growth of Nassau.[9][10]

Ferrys provide water travel around Nassau to the surrounding islands. Prince George Wharf is the main port in the city that serves cruise ships with ports of call in Nassau.

Public jitney buses and taxis provide transport in and around Nassau. Rental cars are also available in the city and at the airport.

Major roads in Nassau include:

There are no controlled access highways in Nassau. Both Tonique Williams Darling Highway and Sir Milo Butler Highway are major roadways.

Vehicles in Nassau drive on the left side like in Britain, but many vehicles are imported from the United States with left hand steering wheel.

Main article: Culture of the Bahamas

Nassau has been recognized as a part of the UNESCO Creative Cities Network as a city of Crafts and Folk Art. It is one of only two Caribbean cities to receive this honor.[11]

File:JunkanooDancerPixelizedFace2006.jpg
Junkanoo participant in costume during the 2006 Parade

The city's chief festival is Junkanoo, an energetic, colourful street parade of brightly costumed people dancing to the rhythmic accompaniment of cowbells, drums and whistles. The word 'Junkanoo' is named after the founder 'John Kanoo'. The celebration occurs on December 26 and January 1, beginning in the early hours of the morning (1:00 a.m.) and ending around 10 a.m.

Nassau was featured as an important location in several movies, including the Beatles film Help! and the James Bond films Thunderball, (1965) and Never Say Never Again, (a remake of Thunderball) (1983) and also for part of the action in Casino Royale (2006). In 1981, it was used as a location for the ocean scene (in the film portrayed as being in Greece) in For Your Eyes Only.[12] Several other late 20th and 21st century movies have been set here, including After the Sunset, Into the Blue (2005), and Flipper (1996). It hosted the Miss Universe 2009 pageant.