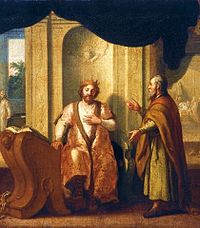 Nathan, on the right, with King David, by Matthias Scheits

For other biblical people with this name, see Nathan (given name).

According to 2 Samuel, he was a court prophet who lived in the time of King David. He announced to David the covenant God was making with him (2 Samuel 7), and he came to David to reprimand him over his committing adultery with Bathsheba while she was the wife of Uriah the Hittite whose death the King had also arranged to hide his previous transgression (2 Samuel 11-12).

In 1 Kings 1:8-45 it is Nathan who tells the dying David of the plot of Adonijah to become king, resulting in Solomon being proclaimed king instead. Nathan presides at the anointing of King Solomon, and his name appears in the coronation anthem Zadok the Priest.

King David named one of his sons Nathan, possibly after the prophet.[citation needed]

The feast day of Nathan the Prophet is on 24 October. In the Eastern Orthodox Church, and those Eastern Catholic Churches which follow the Byzantine Rite, he is commemorated as a saint on the Sunday of the Holy Fathers (i.e., the Sunday before the Great Feast of the Nativity of the Lord).