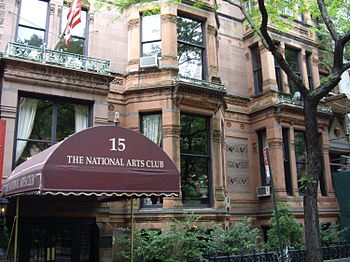 The National Arts Club is a private club in Gramercy Park, Manhattan, New York City. It was founded in 1898 by Charles DeKay, an art and literary critic of the New York Times to "stimulate, foster, and promote public interest in the arts and to educate the American people in the fine arts". Since 1906 the organization has occupied the Samuel J. Tilden House, a landmarked Victorian Gothic Revival[1] brownstone at 15 Gramercy Park, next door to the The Players, a club with similar interests. The National Arts club offers a variety of shows, educational programs, and awards in areas including theater, visual arts, film, literature and music. It is noted for allowing members access to a Gramercy Park key.

The club's mansion headquarters was designated a New York City landmark in 1966,[2] and declared a National Historic Landmark in 1976.[3][4][5] It is located in the Gramercy Park Historic District.

The last decade of the 19th century saw a proliferation of clubs in New York City. A group of friends, all of them involved in architecture, art, or civic affairs, discussed the possibility of a new kind of club that would embrace all the arts. The establishment of the Club came at a time when American artists were increasingly turning to their own nation rather than exclusively to Europe as a center of work and creativity. Significantly, the Club would offer full membership for women at the onset, reflecting their accomplishment in the arts.

While the group was working out an organizational plan, Charles DeKay, the literary and art critic of the New York Times for 18 years, returned from a diplomatic post abroad. An inspired organizer and entrepreneur, he sent letters to men and women of importance in the New York area as well as in metropolitan areas across the country. The response was so enthusiastic that the Club was able to apply to Albany for its charter in 1898. With the application went a list of the officers, Board of Trustees, and members totaling more than 1200.

The list included such collectors as Henry Frick, William T. Evans, Benjamin Altman, Jules Bache and Henry Walters. Though not a charter member, J. Pierpont Morgan joined the Club early in its development and later was made an Honorary Vice President. Among the artists of the period, earlier charter members, or those joined in the early days of the Club were Frederic Remington, William Merritt Chase, Robert Henri and George Bellows.

The Club's first home was a brownstone on West 34th Street. Commerce, meanwhile, was moving up from downtown, and the neighborhood of brownstones was changing. Spencer Trask, its treasurer, was asked to find the Club a new home. He found that 14 and 15 Gramercy Park South, the former home of Samuel Tilden, was on the market. Legend has it that he was so afraid that some other buyer would also find it that he put down some money of his own to bind the bargain. In 1906, the Club acquired the Samuel J. Tilden House.

Since the Summer 2006, the Mansion's stoop at 14 Gramercy Park has been under restoration. Recently, New York artist Sergio Rossetti Morosini sculpted a bust of Michelangelo for its façade.

The president of the club from 1985 to 2011 was O. Aldon James.[6] No stranger to controversy, James was credited with revitalizing the organization and doubling the membership.[7] In the same period, however, there was a conviction for fraudulent use of the club's nonprofit tax identity by James's twin brother John,[8] and another conviction for the theft of tax receipts by the club's dining room manager,[9] as well as a high-profile conflict with Gramercy Park trustees over the cutting of trees that the club sought to save.[10] In 2004, doubts were aired that the club's historic building was being properly maintained.[11]

In September 2012, an 18-month investigation into the final five years of James' presidency by New York State Attorney General Eric T. Schneiderman resulted in a $2 million lawsuit against James by the state, charging that he misused the club's funds and real estate for his own benefit. The state charges that James used his control of the club to take over numerous real estate units under its auspices, and that he and his twin brother hoarded clothes, antiques and other valuable artifacts until their rooms could no longer be lived in. According to the state, since 2006, James' activities cost the club $1.5 million in lost rentals, as well as a quarter of a million dollars the club provided for James' opulent lifestyle. James also fraudulently used money from a fellowship fund to pay for repairs to the club's facade. The state's complaint against James was near to a settlement in July 2012, until James rejected it. James also has two lawsuits of his own outstanding against the club.[12]

The state's investigation also resulted in agreements with the club for reforms, such as term limits on officers and board members, as well as changes in some of its real estate practices. In addition the current president of the club, painter and philanthropist Dianne Bernhard, who took office in June 2011 when James was ousted, agreed to step down and leave the board once her term was up.[12]

The National Arts Club is one of the few private clubs that has admitted women as full and equal members since its inception.

The National Arts Club is proud of its early recognition of new media art forms, like photography, film and digital media, and counts Alfred Stieglitz as one of its early members. Musicians Victor Herbert and Walter Damrosch were members, as were architects Stanford White and George B. Post.

The Dramatic Arts are currently represented by members Martin Scorsese, Ethan Hawke, Robert Redford and Uma Thurman, and the literary arts by such writers as Alice Hoffman, Ryan Holiday and Edward Renehan. The membership of the National Arts Club has included three Presidents of the United States: Theodore Roosevelt, Woodrow Wilson and Dwight Eisenhower along with Senator William A. Clark.[13]