The National Assembly (French: Assemblée nationale; pronounced: [a.sɑ̃.ble.na.sjɔˈnal]) is the lower house of the bicameral Parliament of France under the Fifth Republic. The upper house is the Senate ("Sénat"). The National Assembly's members are known as députés (French pronunciation: ​[depyˈte]; "delegate" or "envoy" in English; the word is an etymological cognate of the English word "deputy", usually "adjoint" in French).

There are 577 députés, each elected by a single-member constituency through a two-round voting system. 289 seats are therefore required for a majority. The assembly is presided over by a president (currently Claude Bartolone), normally from the largest party represented, assisted by vice-presidents from across the represented political spectrum. The term of the National Assembly is five years; however, the President of the Republic may dissolve the Assembly (thereby calling for new elections) unless he has dissolved it in the preceding twelve months. This measure is becoming rarer since the 2000 referendum reduced the presidential term from seven to five years: a President usually has a majority elected in the Assembly two months after him, and it would be useless for him to dissolve it for those reasons.

Relationships with the executive

Jacques Chaban-Delmas was three times President of the Assembly between 1958 and 1988.

The Constitution of the French Fifth Republic greatly increased the power of the executive at the expense of Parliament, compared to previous constitutions (Third and Fourth Republics).[1]

The President of the Republic can decide to dissolve the National Assembly and call for new legislative elections. This is meant as a way to resolve stalemates where the Assembly cannot decide on a clear political direction. This possibility is seldom exercised. The last dissolution was by Jacques Chirac in 1997, following from the lack of popularity of prime minister Alain Juppé; however, the plan backfired, and the newly elected majority was opposed to Chirac.

The National Assembly can overthrow the executive government (that is, the Prime Minister and other ministers) by a vote of no-confidence (motion de censure). For this reason, the prime minister and his cabinet are necessarily from the dominant party or coalition in the assembly. In the case of a president and assembly from opposing parties, this leads to the situation known as cohabitation; this situation, which has occurred three times (twice under Mitterrand, once under Chirac), is likely to be rarer now that presidential and assembly terms are the same length.

While motions de censure are periodically proposed by the opposition following government actions that it deems highly inappropriate, they are purely rhetorical; party discipline ensures that, throughout a parliamentary term, the government is never overthrown by the Assembly.[2] Since the beginning of the Fifth Republic, there has only been one single successful motion de censure, in 1962 in hostility to the referendum on the method of election of the President,[3] and president Charles de Gaulle dissolved the Assembly within a few days.[4]

The Government (the Prime Minister and the Minister of relationships with Parliament) used to set the priorities of the agenda for the Assembly's sessions, except for a single day each month. In practice, given the number of priority items, it meant that the schedule of the Assembly was almost entirely set by the executive; bills generally only have a chance to be examined if proposed or supported by the executive. This, however, was amended on 23 July 2008. Under the amended constitution, the Government sets the priorities for two weeks in a month. Another week is designated for the Assembly's "control" prerogatives (consisting mainly of verbal questions addressed to the government). And the fourth one is set by the Assembly. Also, one day per month is set by a "minority" (group supporting the government but which is not the biggest group) or "opposition" (group having officially declared it did not support the government) group.

Members of the assembly can ask written or oral questions to ministers. The Wednesday afternoon 3pm session of "questions to the Government" is broadcast live on television. Like prime minister's questions in Britain, it is largely a show for the viewers, with members of the majority asking flattering questions, while the opposition tries to embarrass the government.[5]

The Palais Bourbon, where the National Assembly meets

Since 1988, the 577 deputies are elected by direct universal suffrage with a two-round system by constituency, for a five-year mandate, subject to dissolution. The constituencies each have approximately 100,000 inhabitants. The electoral law of 1986 specifies that variations of population between constituencies should not, in any case, lead to a constituency exceeding more than 20% the average population of the constituencies of the département.[6] However, districts were not redrawn between 1982 and 2009. As a result of population movements over that period, there were inequalities between the less populous rural districts and the urban districts. For example, the deputy for the most populous constituency, in the department of Val-d'Oise, represented 188,000 voters, while the deputy for the least populous constituency, in the department of Lozère, represented only 34,000.[7] The constituencies were redrawn in 2009,[8] but this redistribution was controversial.[9] Among other controversial measures, it created eleven constituencies and seats for French residents overseas, albeit without increasing the overall number of seats beyond 577.[10][11]

To be elected in the first round of voting, a candidate must obtain at least 50% of the votes cast, with a turn-out of at least 25% of the registered voters on the electoral rolls. If no candidate is elected in the first round, those who poll in excess of 12.5% of the registered voters in the first-round vote are entered in the second round of voting. If no candidate comply such conditions, the two highest-placing candidates advance to second round. In the second round, the candidate who receives the most votes is elected. Each candidate is enrolled along with a substitute, who takes the candidate's place in the event of inability to represent the constituency, when the deputy becomes minister for example.

The organic law of 10 July 1985 established a system of party-list proportional representation within the framework of the département. It was necessary within this framework to obtain at least 5% of the vote to elect an official. However, the legislative election of 1986, carried out under this system, gave France a new majority which returned the National Assembly to the plurality voting system described above.

There are 570 elected officials of the departments,[12] five representatives of the overseas collectivities (two for French Polynesia, one for Wallis and Futuna, and one for Saint Pierre and Miquelon) and two for New Caledonia since 1986.

Conditions and privileges for members 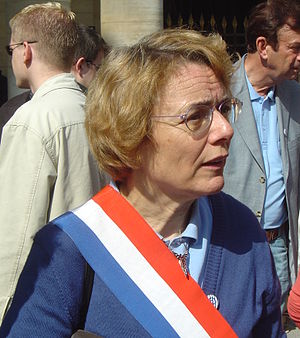 The allowances and privileges of the members: Assembly members receive a salary of 7,043.69 euros per month (USD 10,389.49). There is also the "compensation representing official expenses" ("IRFM" – indemnité représentative de frais de mandat) of 5 867,39 euros per month (USD 8,654.44) to pay costs related to the office, and finally a total of 8 949 euros per month (USD 11,884.07) to pay up to 5 employees. They also have an office in the Assembly, various advantages in terms of transport and communications, social security, a pension fund and unemployment insurance specific. Under Article 26 of the Constitution, deputies, like Senators, are protected by parliamentary immunity. In the case of an accumulation of mandates, a member cannot receive a wage of more than 9 779.11 euros (USD 14,424.25).

Accumulation of mandates and minimum age

Since 1958, the position of member of the National Assembly is incompatible with that of any other elected member (Senator or Member of European Parliament), or with some administrative functions (members of the Constitutional Council of France and senior officials such as prefects, magistrates or officers who are ineligible for Department where they are stationed). Members may not have more than one local mandate (in a municipal, intercommunal, general or regional council) in addition to their current mandate. The mandate is also incompatible with a ministerial function. Upon appointment to the Government, the elected member has one month to choose between the mandate and the office. If he or she chooses the second option, then they are replaced by their deputy.

To be eligible to be elected to the National Assembly, one must be at least 23 years old, of French citizenship, and not subject to a sentence of deprivation of civil rights or to personal bankruptcy.

The last legislative elections, held in June 2012 resulted in the following distribution of seats:

15 seats in the assembly are necessary to be able to form a group.