From Infogalactic: the planetary knowledge core
(Redirected from National Assembly of Azerbaijan)
Jump to: navigation, search

The National Assembly (Azerbaijani: Milli Məclis), also transliterated as Milli Majlis is the legislative branch of government in Azerbaijan. The unicameral National Assembly has 125 deputies: previously 100 members were elected for five-year terms in single-seat constituencies and 25 were members elected by proportional representation; as of the latest election, however, all 125 deputies are returned from single-member constituencies. Milli Majlis was the first secular republican parliament in the Muslim world.[1]

Following the Russian Revolution in February 1917, a special committee consisting of deputees from Transcaucasian State Duma was created. In November, Transcaucasian Commissariat was created as the first government of independent Transcaucasia. The Sejm made up from representatives of three nations did not have a solid political platform as each nation looked after its own interests. This subsequently led to dissolution of the Sejm on May 25, 1918. 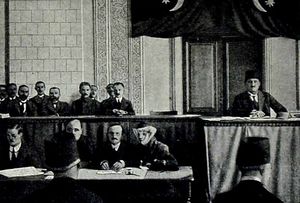 First meeting of the Azerbaijani Parliament

Therefore, basing on 24 thousand representatives of nationalities of Azerbaijan, Azerbaijani parliament made up from 80 Muslims, 21 Armenians, 10 Russians, 1 German and 1 Jew was established on November 29 and convened on December 7, 1918. Thus, the first session of the parliament took place in the building of former Zeynalabdin Tagiyev Russian Muslim School located on present day Istiglaliyyat Street of Baku and was chaired by Rasulzade. Alimardan Topchubashov was elected the Speaker of the Parliament, Hasanbey Agayev - Deputy Speaker. By the end of 1919, there were 11 various political party factions in the parliament represented by 96 deputies. During its 17-month existence, the parliament held 145 sessions with the last session being convened on April 27, 1920 on the eve of Russian occupation of Azerbaijan. A total of 270 resolutions were sponsored, 230 of which were passed. Parliamentary delegations of Azerbaijan signed several friendship treaties with Turkey, Iran, Great Britain, and US and a defense pact with Georgia; attended Paris Peace Conference several times requesting recognition from Western countries. In January 1920, Azerbaijan Democratic Republic was de facto recognized by the Peace Conference.[1]

In May 1921, the first All-Azerbaijan Soviet Session made up of newly elected deputies from all regions of Azerbaijan convened in Baku. The elected deputies were mainly drawn from poor, uneducated, unprepared factory workers and villagers which facilitated complete rule from Moscow.[citation needed] The first session established the Azerbaijan Central Executive Committee consisting of 75 members and its board with 13 members. From 1921 through 1937, nine sessions of All-Azerbaijan Soviets were convened. In 1937, during the 9th session of the All-Azerbaijani Soviets a new Azerbaijan SSR Constitution was ratified and the new legislative body the Supreme Soviet of Azerbaijan SSR was established.

The first elections to Supreme Soviet took place on June 24, 1938. Out of 310 deputies elected, 107 were workers, 88 collective farmers and 115 educated civil servants. Seventy two of the deputies were women. Due to the authoritarian nature of Soviet rule where most new initiatives were met as conspiracies against the state, the parliament was virtually ineffective. Due to multiple reforms and restructuring in the government of the Azerbaijan SSR in the 1970s-1980s, the role of the Supreme Soviet increased. Many legislative reforms including the ratification of the new Azerbaijan SSR Constitution of 1977 took place. After the demands of the Armenian SSR to transfer the NKAO region of Azerbaijan to Armenia, the parliament was largely passive and indifferent. On October 1918, 1991 the Supreme Soviet passed a resolution confirming the restoration of the independence of Azerbaijan.[2]

Parliament of Republic of Azerbaijan

The assembly is headed by its Speaker assisted by the First Deputy Speaker and two deputy speakers. Ogtay Asadov is the current speaker of the assembly, Ziyafet Asgarov is the First Deputy Speaker and, Bahar Muradova and Valeh Alasgarov are deputy speakers.[3] The work at the parliament is administered by the Parliament Apparatus headed by Sefa Mirzayev, aided by Assistant Manager Elkhan Ahmadov. The Parliament Apparatus is subdivided into Department of State Roster for Territorial Units and Municipalities, and Codification Sector Department.[4]

First session of the National Assembly in 1918

In the latest 2010 parliamentary elections, the ruling New Azerbaijan Party strengthened its grasp on the legislature, securing a majority of 73 out of 125 seats.[5] The other seats went to nominally independent, government-leaning candidates, and to "soft opposition" parties. The two major opposition parties (Musavat and the Parties of the People’s Front of Azerbaijan) lost their previous 8 seats, thus resulting in an opposition-free Parliament.[6]

The Central Election Commission said turnout was 50.1%, out of a total 4.9 million people eligible to vote. Opposition leaders suggested the low turnout was due to candidate disqualifications by the CEC, and consequent discouragements to vote after their choice of candidate was excluded.[7]

The United States declared that the elections "did not meet international standards",[6] while the Organization for Security and Co-operation in Europe, EU and Council of Europe highlighted some positive aspects, while stating that "the conduct of the elections did not represent significant progress in the process of the country’s democratic development".[6]

In addition to the parliamentary committees, Milli Majlis has a Chamber of Accounting and Toponyms Commission. The parliament publishes its own newspaper Azərbaycan qəzeti (Azerbaijan newspaper) widely distributed around the country.[9]

Chairmen of the National Assembly (Supreme Soviet to 1991, National Council 1991–1992) of Azerbaijan 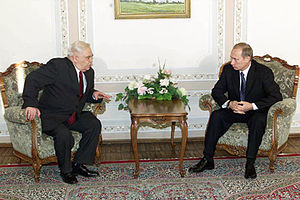