The National Banking Acts of 1863 and 1864 were two United States federal banking acts that established a system of national banks for banks, and created the United States National Banking System. They encouraged development of a national currency backed by bank holdings of U.S. Treasury securities and established the Office of the Comptroller of the Currency as part of the United States Department of the Treasury and authorized the Comptroller to examine and regulate nationally chartered banks. The Act shaped today's national banking system and its support of a uniform U.S. banking policy.

After the expiration of the Second Bank of the United States in 1836, the control of banking regimes devolved mostly to the states. Different states adopted policies including a total ban on banking (as in Wisconsin), a single state-chartered bank (as in Indiana and Illinois), limited chartering of banks (as in Ohio), and free entry (as in New York).[1] While the relative success of New York's "free banking" laws led a number of states to also adopt a free-entry banking regime, the system remained poorly integrated across state lines. Though all banknotes were uniformly denominated in dollars, notes would often circulate at a steep discount in states beyond their issue.

In addition, there were well-publicized frauds arising in states like Michigan, which had adopted free entry regimes but did not require redeemability of bank issues for specie. The perception of dangerous "wildcat" banking, along with the poor integration of the U.S. banking system, led to increasing public support for a uniform national banking regime.

A "greenback" note issued by the U.S. during the Civil War

The United States Government, on the other hand, still had limited taxation capabilities, and so had an interest in the seigniorage potential of a national bank. In 1846, the Polk Administration created a United States Treasury system that moved public funds from private banks to Treasury branches in order to fund the Mexican-American War. However, without a national currency, the revenue generated this way was limited.

One of the first attempts to issue a national currency came in the early days of the Civil War when Congress approved the Legal Tender Act of 1862, allowing the issue of $150 million in national notes known as greenbacks and mandating that paper money be issued and accepted in lieu of gold and silver coins. The bills were backed only by the national government's promise to redeem them and their value was dependent on public confidence in the government as well as the ability of the government to give out specie in exchange for the bills in the future. Many thought this promise backing the bills was about as good as the green ink printed on one side, hence the name "greenbacks." [2]

The National Banking Act (ch. 58, 12 Stat. 665; February 25, 1863), originally known as the National Currency Act, and was passed in the Senate by a narrow 23–21 vote. The main goal of this act was to create a single national currency and to eradicate the problem of notes from multiple banks circulating all at once. The Act established national banks that could issue notes which were backed by the United States Treasury and printed by the government itself. The quantity of notes that a bank was allowed to issue was proportional to the bank's level of capital deposited with the Comptroller of the Currency at the Treasury. To further control the currency, the Act taxed notes issued by state and local banks, essentially pushing non-federally issued paper out of circulation.[7] 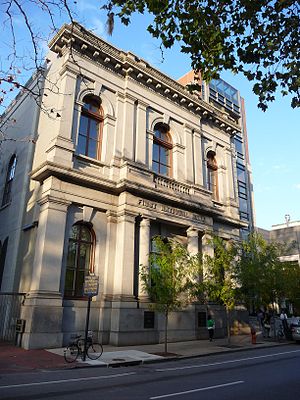 The National Banking Act of 1863 was superseded by the National Banking Act of 1864 (ch. 106, 13 Stat. 99; June 3, 1864) just one year later.[2] The new act also established federally issued bank charters, which took banking out of the hands of state governments. Before the act, charters were granted by state legislatures who were under an immense amount of political pressure and could be influenced by bribes. This problem was resolved to some degree by free banking laws in some states but it was not until this act was passed that free banking was established on a uniform, national level and charter issuance was taken out of the hands of discriminating and corrupt state legislatures.[7] The first bank to receive a national charter was the First National Bank of Philadelphia, Pennsylvania (Charter #1).[8] The first new national bank to open was The First National Bank of Davenport, Iowa (Charter #15).[citation needed] Additionally, the new Act converted more than 1,500 state banks to national banks.[citation needed]

The National Bank Act of 1863 was designed to create a national banking system, float federal war loans, and establish a national currency. Congress passed the act to help resolve the financial crisis that emerged during the early days of the American Civil War (1861–1865). The fight with the South was expensive and no effective tax program had been drawn up to finance it. In December 1861 banks suspended specie payments (payments in gold or silver coins for paper currency called notes or bills). People could no longer convert bank notes into coins. Government responded by passing the Legal Tender Act (1862), issuing $150 million in national notes called greenbacks. However, bank notes (paper bills issued by state banks) accounted for most of the currency in circulation.

• Brought the federal government into active supervision of commercial banks. • Established the Office of the Comptroller of the Currency with the responsibility of chartering, examining and supervising all national banks. • In 1865, Congress followed up on this act by imposing a 10 percent tax on state bank notes to encourage them to join the national banking system – it worked as most state banks flipped charters to avoid the tax - it wacxcs not until the 1870s and 80s when the growing popularity of checks developed by state banks and the declining importance and profitability of bank notes issued by national banks caused a resurgence in chartering of state banks. • The Act was originally based on New York State Law

The years leading up to the passing of the 10% tax on bank notes consisted of events surrounding the National Banking Act of 1864. During this time period, Hugh McCulloch was determined to "fight against the national banking legislation, which he rightly perceived as a threat to state-chartered banking. Although he tried to block the system's creation, he [McCulloch] was not determined to be its champion." Part of his plans to revamp this portion of the banking system included hiring a new staff, being hands-on with several aspects such as "personally evaluating applications for bank charters and consoled prospective bankers", and "assisting in the design of the new national bank notes, and arranged for their engraving, printing, and distribution." As an end result of McCulloch's efforts, many banks were just not willing to conform to his system of operations. This prompted Congress to pass "a 10 percent tax on the notes of state banks, signaling its determination that national banks would triumph and the state banks would fade away."

A later act, passed on March 3, 1865, imposed a tax of 10 percent on the notes of state banks to take effect on July 1, 1866. Similar to previous taxes, this effectively forced all non-federal currency from circulation. It also resulted in the creation of demand deposit accounts, and encouraged banks to join the national system, increasing the number of national banks substantially.[2]

The National Banking Acts served to create the (federal-state) dual structure that is now a defining characteristic of the U.S. banking system and economy. The Comptroller of the Currency continues to have significance in the U.S. economy and is responsible for administration and supervision of national banks as well as certain activities of bank subsidiaries (per the Gramm-Leach-Bliley Act of 1999).[2] In 2004 the Act was used by John D. Hawke, Jr., Comptroller of the Currency, to effectively bar state attorneys general from national bank oversight and regulatory roles. Many blame the resulting lack of oversight and regulation for the late-2000s recession, the bailout of the U.S. financial system and the subprime mortgage crisis.[9]