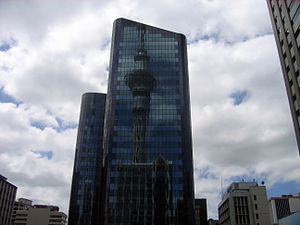 UK based Lloyds Bank became the sole owner of the bank in 1966 and National Bank adopted the Lloyds bank black horse as its logo. Lloyds sold the bank to Australian ANZ Bank in 2003, at which time it became part of ANZ National Bank Limited, the New Zealand subsidiary of Australia and New Zealand Banking Group.

NBNZ was founded in 1872 in London as an overseas bank and shared many directors with Lloyds Bank. The next year it established branches in Wellington, Auckland, and Christchurch, and acquired 13 branches from ailing Bank of Otago (1863–73), see William Larnach. The National Bank of New Zealand (Ltd) Act gave NBNZ the right to issue banknotes redeemable (in specie or gold). Though the bank was technically domiciled in London (which provided certain advantages), the major portion of its shareholders were New Zealand resident or associated.

In 1919, Lloyds Bank acquired a small interest in NBNZ. This situation continued until 1966, when Lloyds Bank purchased NBNZ outright. National Bank and the Bank of New Zealand established joint data processing services, which they combined as Databank Systems Limited in 1967.

NBNZ tentatively dipped a toe into foreign waters in 1969 when it NBNZ established a branch in Rarotonga, Cook Islands. This foray ended in 1986 when NBNZ sold its banking license in Rarotonga to European Pacific Banking Co.

In 1978 NBNZ moved its head office from London to Wellington. At that time the Black Horse became the symbol of NBNZ. The National Bank's distinctive Black Horse logo dates back to 1677 London when Humphrey Stockes adopted it as sign for his shop. Stokes was a goldsmith and 'keeper of the running cashes', an early term for banker. When Lloyds Bank took over the site in 1884 it retained the horse as its symbol. 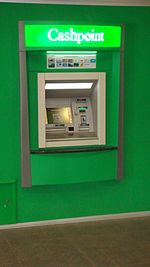 In 2003 ANZ purchased NBNZ from Lloyds TSB. With the purchase, ANZ also bought the right to continue to use the Black Horse logo for seven years.

In September 2012, ANZ National Bank CEO David Hisco announced that it would drop The National Bank brand in favour of the ANZ brand over the next two years.[1]