The predecessor of this league was the Midwest Basketball Conference in 1935. It changed its name in 1937 in an attempt to attract a larger audience. The league was created by three corporations: General Electric, Firestone and Goodyear. It was primarily made up of Great Lakes area small-market and corporate teams.

The league began rather informally. Scheduling was left to the discretion of each of the teams, as long as the team played at least ten games and four of them were on the road. Games played increased yearly as the popularity of professional basketball and the NBL grew in America. Games consisted either of four ten-minute quarters or three fifteen-minute periods. The choice was made by the home team. Some of the teams were independent, while others were owned by companies that also found jobs for their players.

Chicago newspaper sports editor Leo Fischer acted as president of the NBL from 1940-44.

In 1946, the Basketball Association of America (BAA) incorporated resulting in a three-year battle with the NBL to win both players and fans. The BAA played its games in larger cities and venues.

On August 3, 1949, representatives from the 12-year-old NBL and 3 year old BAA met at the BAA offices in New York’s Empire State Building to finalize a merger. Maurice Podoloff was elected head of the new league. The new National Basketball Association (NBA) was made up of 17 teams that represented both small towns and large cities across the country. Unlike the records and statistics of the rival BAA, NBL records and statistics are not considered valid in official NBA totals for records and statistics.

The Oshkosh All-Stars, who appeared in the championship series five consecutive years (1938–42) and won two titles, were led by rugged 6' 4" (1.93 m) center Leroy "Cowboy" Edwards. Edwards was a consensus NCAA "All American" and Helms Foundation "College Player of the Year" as a member of the 1934–35 University of Kentucky Wildcats. He left Kentucky after two years, only the one varsity season, to pursue a professional basketball career, which was unheard of at the time. He led the NBL in scoring three consecutive seasons, 1937–38 to 1939–40. He set numerous NBL and professional basketball scoring records and is generally credited with the introduction of the "3 second rule" in basketball which is still in existence today. Edwards played all 12 NBL seasons with the Oshkosh All-Stars and retired just prior to its merger with the BAA to form the NBA.

The Fort Wayne Zollner Pistons—so nicknamed because they were owned by Fred Zollner, whose company made pistons for engines—were led by tough veteran Bobby McDermott. The Pistons finished second in 1942 and 1943 and won the league title in 1944 and 1945. Like many teams of that era, it wasn't uncommon for Fort Wayne to play its games in taverns, armories, high-school gyms or ballrooms.

Under Zollner, the Pistons would eventually play an important role in the survival and growth of the NBA. Zollner's financial support of the NBA helped the league stay afloat during its tumultuous formative years.

Challenging the Zollner Pistons and Oshkosh for supremacy were the Sheboygan Red Skins. Beginning in 1941, the season before Fort Wayne joined the NBL, Sheboygan appeared in five of six championship series. They lost to Oshkosh in the 1941 finals, beat Fort Wayne for the title in 1943 but lost to the Zollner Pistons in 1944 and 1945, and were swept in the 1946 finals by the league's newest member, the powerhouse Rochester Royals, who boasted Hall of Famers Al Cervi, Bob Davies and Red Holzman.

The NBL's third era was dominated by Mikan, the 6'10" (2.08 m), three-time NCAA "All-American" center from DePaul University in Chicago. As a rookie he led the Chicago American Gears to the 1947 NBL title, but before the next season, owner Maurice White pulled his team out of the league and formed his own 24-team circuit called the Professional Basketball League of America. That venture quickly failed, and Mikan was signed by the NBL's Minneapolis Lakers, where he teamed with the versatile Jim Pollard to win the 1948 championship.

After the 1947–48 season, Mikan's Lakers quit the League to join the Basketball Association of America (BAA), along with three other NBL clubs: Rochester, Fort Wayne, and Indianapolis.

The NBL added an all-black team in December of its final season, when one of its replacement clubs folded, the Detroit Vagabond Kings. That franchise was awarded to a famous barnstorming team, the New York Rens, composed entirely of African Americans, to play out the season in Dayton, Ohio, as the Dayton Rens. In 1949 after a three-year battle with the BAA for fans and players the NBL and BAA merged to become the NBA.

The NBL contributed significantly to the foundation of the NBA, but it also had major accomplishments in other areas, most notably in offering opportunities for African-American players. In the 1942–43 season, with many players in the armed forces, two NBL clubs, the Toledo Jim White Chevrolets and the Chicago Studebakers, filled their rosters by signing African-Americans—five years before Jackie Robinson would break baseball's color barrier with the Brooklyn Dodgers. Neither team fared well. Toledo signed several black players to start the season, including Bill Jones, who had starred at the University of Toledo, but the team lost its first four games and folded due to financial difficulties. Chicago stocked its roster with several members of the Harlem Globetrotters, who worked during the week at the Studebaker plant, but it also folded after compiling an 8–15 record.

Five current NBA teams trace their history back to the NBL. Three teams joined the BAA in 1948: the Minneapolis Lakers (now the Los Angeles Lakers), the Rochester Royals (now the Sacramento Kings), and the Fort Wayne Zollner Pistons (now the Detroit Pistons). Two more teams were part of the merger that created the NBA in 1949: the Buffalo Bisons/Tri-Cities Blackhawks (now the Atlanta Hawks), and the Syracuse Nationals (now the Philadelphia 76ers).

Five former NBA teams also trace their history back to the NBL: the Anderson Packers, Denver Nuggets, Indianapolis Jets (as the Kautskys), Sheboygan Red Skins and Waterloo Hawks played in the NBL/BAA/NBA. The Jets played in the BAA for the 1948–49 season only; the remaining teams for the 1949–50 season only. Anderson, Sheboygan and Waterloo joined the National Professional Basketball League in 1950.

The NBL also created the Indianapolis Olympians for the 1949–50 NBA season. When the NBL and BAA merged, this team joined the NBA without playing a single NBL game.

Also still surviving are the Akron Goodyear Wingfoots, the initial NBL Champion in 1938. The Wingfoots suspended operations for World War II and were not included in the NBL/BAA merger. Instead, they remained in the National Industrial Basketball League (NIBL), which in 1961 became the National AAU Basketball League (NABL). The Wingfoots are still an AAU Elite team in the NABL.

Note: * denotes a team currently playing in the NBA (7 ancestors of 5 NBA clubs). 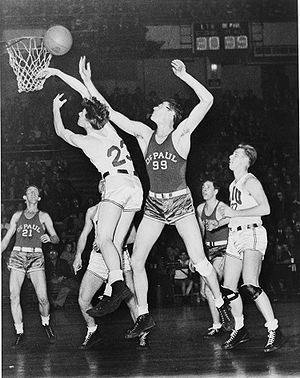 Coach of the Year[2]

Rookie of the Year[2]