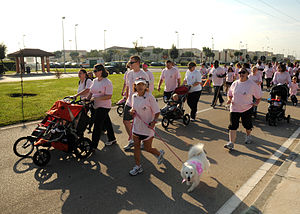 Breast Cancer Awareness Month (BCAM), also referred to in America as National Breast Cancer Awareness Month (NBCAM), is an annual international health campaign organized by major breast cancer charities every October to increase awareness of the disease and to raise funds for research into its cause, prevention, diagnosis, treatment and cure. The campaign also offers information and support to those affected by breast cancer. 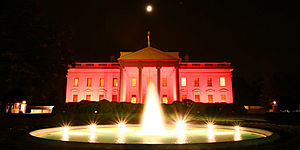 NBCAM was founded in 1985 in October as a partnership between the American Cancer Society and the pharmaceutical division of Imperial Chemical Industries (now part of AstraZeneca, producer of several anti-breast cancer drugs). The aim of the NBCAM from the start has been to promote mammography as the most effective weapon in the fight against breast cancer.[1]

In 1993 Evelyn Lauder, Senior Corporate Vice President of the Estée Lauder Companies, founded The Breast Cancer Research Foundation and established the pink ribbon as its symbol, though this was not the first time the ribbon was used to symbolize breast cancer:[2] a 68-year-old California woman named Charlotte Haley, whose sister, daughter, and granddaughter had breast cancer, had distributed peach-color ribbons to call attention to what she perceived as inadequate funding for research.[3] In the fall of 1991, the Susan G. Komen Foundation had handed out pink ribbons to participants in its New York City race for breast cancer survivors.[4] 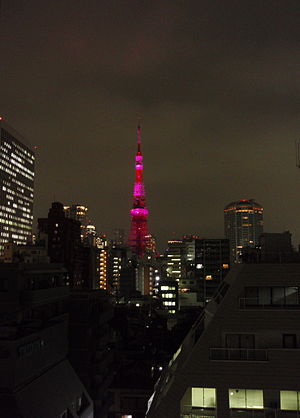 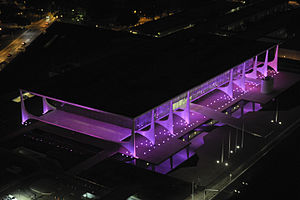 Aerial view of Palácio do Planalto, the official workplace of the President of Brazil, lit up in pink on October 1, 2014

A variety of events around the world are organized in October, including walks and runs, and the pink illumination of landmark buildings. In the United States, the National Football League promotes breast cancer awareness by incorporating pink on and off the field, and comic strip artists use pink on one day in October.[5]

The National Race for the Cure

In October 1983 the Race for the Cure was held for the first time in Dallas, Texas, where 800 people participated. According to the organizers, by 2002 the number of participants reached 1.3 million and the event was held in over 100 US cities. The event is also being organized in several other parts of the world.[6]

This 60-mile fundraising walk, which is spread across two days, raises money for breast cancer research. This walk, which benefits Susan G. Komen for the Cure, occurs in several cities in the United States. The Breast Cancer 3-Day was previously sponsored and managed by Avon and is held in countries around the world.

Male breast cancer, which is rare, is generally overlooked. In 2009 the male breast cancer advocacy groups Out of the Shadow of Pink, A Man's Pink, and the Brandon Greening Foundation for Breast Cancer in Men joined together to globally establish the third week of October as "Male Breast Cancer Awareness Week".[11]

Inspiration for the foundation of NBCAM came from Zeneca Inc. in 1989 when they began a breast cancer screening program within their company. In 1996, with the screening program and study complete, Zeneca Inc. analyzed the total monetary amounts lost due to the increase in health care provided compared with the total monetary amounts lost if the company was to scrap the program were compared. The total costs to the company of running the early detection program were estimated to be $400,000. Total costs to the company if they chose not to run the program were estimated to be around $1.5 million.[12]

Pezzullo (2003) "(Astra)Zeneca’s initial justification for NBCAM was one of basic accounting, not a critique of how women’s healthcare has been assessed or implemented nor a desire to prevent women from developing breast cancer; instead, it was cost-effective for a company to detect cancer in its employees during the disease’s earlier stages."

Critics have said that "the BCAM idea 'was conceived and paid for by a British chemical company that both profits from this epidemic and may be contributing to its cause...'".[13]

Sometimes referred to as National Breast Cancer Industry Month, critics of NBCAM point to a conflict of interest between corporations sponsoring breast cancer awareness while profiting from diagnosis and treatment. The breast cancer advocacy organization, Breast Cancer Action, has said repeatedly in newsletters and other information sources that October has become a public relations campaign that avoids discussion of the causes and prevention of breast cancer and instead focuses on "awareness" as a way to encourage women to get their mammograms. The term pinkwashing has been used by Breast Cancer Action to describe the actions of companies which manufacture and use chemicals which show a link with breast cancer and at the same time publicly support charities focused on curing the disease.[14] Other criticisms center on the marketing of "pink products" and tie-ins, citing that more money is spent marketing these campaigns than is donated to the cause.[15] According to The New York Times in October 2015, fine print disclaimers on pink products sold by Dick's Sporting Goods reveal that in some instances, no money at all is donated to breast cancer research.[3] Other companies cap the amount they give to research during each October's "pink" campaign, but do not tell consumers when that cap has been reached.[3]