The National Championship of Excellence is the current name of the highest tier of the national rugby union competition in Italy[1] The first Italian championship took place in 1929, contested by six of the sixteen teams that existed in Italy at that time.

The competition runs from September to May. After a home-and-away season, the top four teams play a knock-out competition to decide the championship and the bottom team is relegated. The season-ending play-offs have one feature which distinguish them from rugby play-offs in most other countries; the semi-finals are two-legged, with the winner determined by aggregate score.

Until season 2008–09 the Super 10 was operated by the L.I.R.E. (Lega Italiana Rugby d'Eccellenza, Italian Elite Rugby (Union) League), but since its folding (in 2009), the Italian Rugby Federation (FIR) has taken over its organisation.

The leading Super 10 teams qualify to play against teams from the other leading rugby union nations in Europe in the European Challenge Cup. Aironi and Benetton Treviso began competing in the league now known as Pro12 in the 2010–11 season, and took both Italian places in the Heineken Cup. Due to financial problems, the FIR revoked Aironi's professional licence after the 2011–12 season; that team was replaced in Pro12 by the FIR-operated Zebre. From 2014–15, one of the two Italian Pro12 sides will compete in the Heineken Cup's replacement, the European Rugby Champions Cup; the other will play in the newly launched European Rugby Challenge Cup. Both Pro12 teams are intended to concentrate the best domestic talent and help develop the quality of Italian players and therefore improve the talent pool for the national team.

Originally named Serie A since its origin in 1928–29 until 1959–60 season, the name of the national championship was changed to Eccellenza from 1960–61 until 1964–65, then Serie A again until 1985–86. In 1986–87 it was named Serie A1 and the second tier took the name as Serie A2. Since the season 1987–88 the Championship has gone into a play-off phase after a regular season, and the title is assigned through a final (several venues have hosted the final match, notably Padua, Bologna and Rome). After a major restructuring for the 2001–02 season, the national championship was named Super 10 and Serie A1 and A2 became the second and third divisions respectively. The name of championship was changed to Eccellenza once again for the 2010-11 season.

Rugby Calvisano were forced to pull out of the competition for the 2009–10 season due to financial difficulties, setting up an amateur side in the Serie A. Roman clubs Capitolina and Futura Park Roma decided to combine and have also taken Calvisano's place in Europe due to their league position. These two clubs would also be the basis of the proposed new Magners League side, Praetorians Roma. L'Aquila and Prato were promoted from Serie A taking Calvisano's place and the spare Roman club's place.[2] 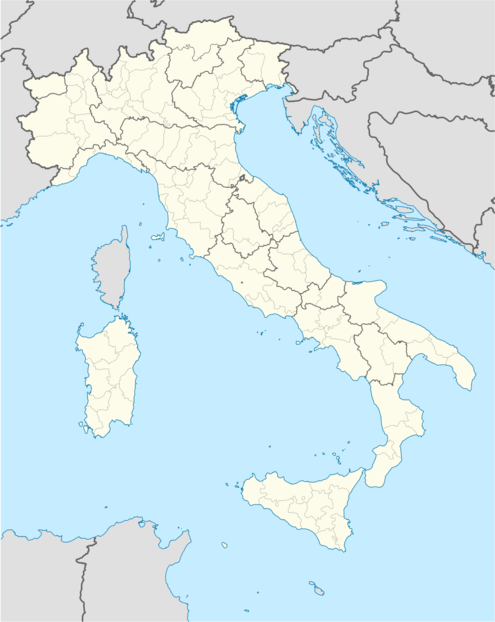 Calvisano
Locations of the 2014–15 Campionato Nazionale Eccellenza. The teams marked with a green dot are part of the RaboDirect Pro12 and do not compete domestically

The withdrawal of Viadana and Benetton Treviso from the league has been compounded by club mergers.[3][4] Rugby Viadana, Gran Parma and Colorno have merged to form GranDucato Rugby. Overmach Parma and Noceto have merged to form Crociati, both new clubs to be based in Parma. These changes created two vacancies in the Super 10. Additionally Colorno and Noceto created vacancies in the second tier of Italian rugby as these five Parma area sides would only now field two professional senior teams between them. All five clubs are shareholders in Aironi. For the 2011–12 season, Calvisano, Reggio and San Gregorio Catania were all promoted. They took the places of Gran Parma, Roma Olimpic and Venezia Mestre

The leading title holder is Amatori Milano who have won eighteen titles (the first one in 1929, the most recent in 1996); Benetton Treviso follow with fifteen (first in 1956 as Rugby Treviso); Rovigo (first title in 1951) and Petrarca (rugby union club from Padua that won their first title in 1970) won eleven titles each. Apart from the aforementioned teams no one has won more than five titles. The team that wins the Championship wears the Scudetto on their jerseys the following season, The clubs that hold at least ten titles win the right to wear a golden star on their jerseys.

Parma with (Crociati and GranDucato Rugby) is the only city to have two teams. The majority of the league teams are from either Veneto or Lombardy in the north of Italy. Treviso, Viadana and Calvisano have dominated the championship in recent years but none now play in the top division.

Italian rugby union is evolving; the clubs are better equipped, better organised and have improved their players training.[citation needed] There is an increase in sponsorship money and an influx of foreign players (some of whom have gone on to represent Italy after qualifying under the three year rule). In 2005 the FIR introduced a rule requiring teams to field at least twelve Italians in their twenty-two match squad. This was an effort to counter the top Italian players often playing in France, which means that the Italian league is not of a high enough standard to improve the national team.

Despite rising playing standards and more media attention on rugby union, Italian teams competing in the Heineken Cup and European Challenge Cup have generally struggled to compete against the established club teams of the other Six Nations countries. In response both John Kirwan, the former Italian coach, and David Pickering, the Welsh Rugby Union chairman, suggested that merged Italian teams should enter the Magners League, now known as Pro12,[5][6] and in March 2009 the Celtic Rugby Board (Magners League) and FIR announced an agreement in principle to add two Italian teams to the Magners League for 2010–11.[7] The two teams were intended to offer Italian qualified players a higher standard of rugby to hone their skills. It removed the best Italian players from the top tier league, and it was envisaged that the Super 10 would be a semi-professional league.

On 18 July 2009 it was announced that the two Magners League teams would be the newly formed Aironi, based in Viadana, and Praetorians Roma, from the capital. As of October 2009, there was a change and it was announced the two teams will be Aironi and Benetton Treviso. Praetorians Roma were nominated in the first round but failed to meet the criteria set down by the evaluators and Benetton Treviso took their place. These new sides will also played in the Heineken Cup and Italy retained its four places in the Challenge Cup, which were taken by top Super 10 teams.

After the 2011–12 season, the first for the league under the Pro12 name, the FIR revoked the licence of Aironi due to financial problems. That team was replaced in Pro12 by a new FIR-operated side, Zebre.

Currently the Italian Senior leagues are structured in the following way:-

The junior league is structured in the following way: