In 1934, a tabulation unit was established in New Orleans, Louisiana to process past weather records. Climate records and upper air observations were punched onto cards in 1936. This organization was transferred to Asheville, North Carolina in 1951, where the National Weather Records Center (NWRC) was established.[3] It was housed in the Grove Arcade Building in Asheville, North Carolina. Processing of the climate data was accomplished at Weather Records Processing Centers at Chattanooga, Tennessee, Kansas City, Missouri, and San Francisco, California, until January 1, 1963 when it became consolidated with the NWRC.[4] This name was maintained by the agency through 1967.[5] The NCDC was then housed at the Veach-Baley Federal Complex in downtown Asheville where it moved after the building's completion in 1995. In 2015, NCDC merged with the National Geophysical Data Center and the National Oceanographic Data Center to form the National Centers for Environmental Information.[2] 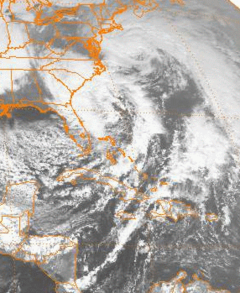 The Center had more than 150 years of data on hand with 224 gigabytes of new information added each day. NCDC archives 99 percent of all NOAA data, including over 320 million paper records; 2.5 million microfiche records; over 1.2 petabytes of digital data residing in a mass storage environment. NCDC has satellite weather images back to 1960.

The Center provides historical perspectives on climate which are vital to studies on global climate change, the greenhouse effect, and other environmental issues. The Center stores information essential to industry, agriculture, science, hydrology, transportation, recreation, and engineering.

Evidence is mounting that global climate is changing. The extent to which man is responsible is still under study. Regardless of the causes, it is essential that a baseline of long-term climate data be compiled; therefore, global data must be acquired, quality controlled, and archived. Working with international institutions such as the International Council of Scientific Unions, the World Data Centers, and the World Meteorological Organization, NCDC develops standards by which data can be exchanged and made accessible.

NCDC provides the historical perspective on climate. Through the use of over a hundred years of weather observations, reference data bases are generated. From this knowledge the clientele of NCDC can learn from the past to prepare for a better tomorrow. Wise use of our most valuable natural resource, climate, is the goal of climate researchers, state and regional climate centers, business, and commerce.[6]

NCDC also maintains World Data Center for Meteorology, Asheville. The four World Centers (U.S., Russia, Japan and China) have created a free and open situation in which data and dialogue are exchanged.

NCDC maintains the US Climate Reference Network datasets amongst a vast number of other climate monitoring products.[7] The current director of the center is Tom Karl, a lead author on three Intergovernmental Panel on Climate Change science assessments.[8]