The National Coal Board (NCB) was the statutory corporation created to run the nationalised coal mining industry in the United Kingdom. Set up under the Coal Industry Nationalisation Act 1946, it took over Britain's collieries on "vesting day", 1 January 1947. In 1987 the NCB was renamed the British Coal Corporation, and its assets were subsequently privatised.

Collieries were taken under government control during the First and Second World Wars. The Sankey Commission in 1919 gave R.H. Tawney, Sidney Webb and Sir Leo Chiozza Money the opportunity to advocate nationalisation, but it was rejected.[1]

Coal reserves were nationalised during the war in 1942 and placed under the control of the Coal Commission, but the mining industry remained in private hands. At the time, many coal companies were small, although some consolidation had taken place in the years before the war.

The NCB was one of a number of public corporations created by Clement Attlee's post-war Labour government to manage nationalised industries. The Coal Industry Nationalisation Act received the Royal Assent on 12 July 1946 and the NCB was formally constituted on 15 July, with Lord Hyndley as its chairman.[2] On 1 January 1947 a notice posted at every colliery in the country read, "This colliery is now managed by the National Coal Board on behalf of the people". Open cast operations were taken over on 1 April 1952.[3]

The NCB acquired 958 collieries, the property of about 800 companies. Compensation of £164,660,000 was paid to the owners for the collieries and £78,457,000 to former owners and for other assets such as 55 coke ovens, 85 brickworks and 20 smokeless fuel plants.[3] The board also took over power stations at some collieries and railway sidings. It managed an estate of more than 140,000 houses and more than 200,000 acres of farmland. At its inception the NCB employed nearly 800,000 workers which was four percent of Britain's total workforce.[4] Its national headquarters were established in Hobart House, London.

The collieries it had acquired varied considerably in size and output. Coal was mined from seams that varied from 20 to 200 inches thick and the average pit produced 245,000 tons annually. More than a third of collieries produced less than 100,000 tons and 50 collieries produced more than 700,000 tons. The coal board divided the country into divisions corresponding to the major coalfields and each division was divided into areas with an output of approximately 4 million tons.[4][5]

In 1947 about half the collieries were in need of immediate attention[6] and a development programme was begun. Between 1947 and 1956 the NCB spent more than £550 million on major improvements and new sinkings, much of it to mechanise the coal getting process underground and by 1957 Britain's collieries were producing cheaper coal than anywhere in Europe. The Plan for Coal produced in 1950 aimed at increasing output from 184 million to 250 million tons by 1970. Competition from cheap oil imports arrived in the late 1950s and from 1957 the coal industry began to contract. Colliery closures between 1958 and 1959 numbered 85. From 700,000 men producing 207 million tons of coal in 1956, output was 133 million tons produced by fewer than 290,000 workers at 292 collieries in 1971.[7][8]

As competition from oil increased, the government stopped subsidising the industry in the mid-1960s and pits closed as uneconomic. When Alf Robens became chairman in 1960, he determined that the NCB's output would be from the best and most productive pits. During his ten-year tenure productivity increased by 70 percent but with far fewer pits and a much reduced workforce.[9] In 1967 the NCB reorganised its structure into 17 new areas each employing about 20,000 men and planned to operate 310 collieries in 1971.[10]

The 1974 Plan of Coal produced in the aftermath of the 1972 miners' strike envisaged that the coal industry would replace 40 million tons of obsolete capacity and ageing pits while maintaining its output.[11] By 1983 the NCB would invest £3,000 million on developing new collieries.[12]

In 1984 it was alleged that the NCB had a list of collieries earmarked for closure and its chairman, Ian MacGregor indicated that the board was looking to reduce output by 4 million tons, a contributory factor in the 1984-85 miners' strike. The strike was one of the longest and most bitter in history and cost more than £7 billion of tax-payer's money.[13] During the strike the NCB lost markets and 23 collieries had closed before the end of 1985. On 5 March 1987 the Coal Industry Act 1987 received Royal Assent signalling the end of the NCB and the formation of its successor, the British Coal Corporation. The industry was run down further after the privatisation of the electricity suppliers in the late-1980s and an increase in imports of cheap foreign coal. Just 51 collieries remained in 1992 when 31 pits were earmarked for closure.[14]

With the passing of the Coal Industry Act 1994, the industry-wide administrative functions of British Coal were transferred to a new Coal Authority. Its economic assets were privatised, the English mining operations were merged with RJB Mining to form UK Coal plc. By the time of privatisation, only 15 pits remained in production. 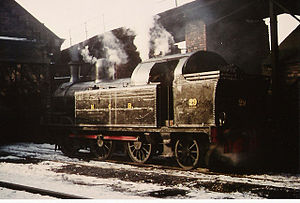 No 29 ready for duty at Philadelphia NCB shed

The NCB's research establishment at Stoke Orchard in Gloucestershire was founded in 1950 with Jacob Bronowski as Director of Research. It closed following privatisation of the coal mining industry. The Stoke Orchard library was safeguarded after closure and is now held by the North of England Institute of Mining and Mechanical Engineers.

NCB subsidiaries managed coal-based chemical products (Coal Products Division) and the production of helmets and other mining equipment (Tredomen Engineering Ltd). In the mid-1970s, the activities of Coal Products Division were transferred to two new companies; National Smokeless Fuels Ltd and Thomas Ness Ltd, although they remained wholly owned by the NCB.

In 1952 the NCB established a film unit. The board was keen to train its staff and new recruits and initiated a scheme to produce technical films as well as commissioning films from outside companies. More than 900 films were made before the unit closed in 1984.[15]