From Infogalactic: the planetary knowledge core
Jump to: navigation, search
For the party of the same name in El Salvador, see National Coalition Party (El Salvador).

Founded in 1918, the National Coalition Party is one of the four largest parties in Finland, along with the Social Democratic Party, the Finns Party and the Centre Party. The party bases its politics on "individual freedom and responsibility, equality, Western democracy and economic system, humane principles and caring."[7] The party is strongly pro-European and is a member of the European People's Party (EPP).

Its vote share has been around 20% in parliamentary elections in the 1990s and 2000s. It won 44 out of 200 seats in the parliamentary elections of 2011, becoming the largest party in the Finnish parliament for the first time in its history. On the municipal level, it became the most popular party in 2008 and has retained that position. In the 2015 election the NCP lost its status as the country's largest party, as they finished second in votes and third in seats. Regardless, the party again joined the government coalition.

Its voters are predominantly urban, while in rural regions its performance is relatively weak.[8] The current leader is Alexander Stubb, elected on 14 June 2014.

According to its platform the National Coalition Party wants to build "a society where a person’s own choices, hopes, and needs set the direction for national development."[9] The party defends "individual freedom, and promotes people’s opportunities to make choices, but without ignoring everyone’s responsibility for their own life, others, and the environment. Our ideology combines freedom with responsibility, democracy, and equality".[9] The party's basic values are education, tolerance, rewarding and caring.[9] Individuals' freedom to think and act independently and minorities' rights are core matters to the party.[10] According to the history section of the official website the platform has been shaped by ideas of conservatism, liberalism and social reform, which have all contributed to the current ideology.[11][third-party source needed] Alexander Stubb has described the party's policies as "unambiguously liberal".[12] In 2010 the party congress voted in favour of supporting same-sex marriage.[13]

In international affairs, the party and its voter base strongly believe in the benefits of the European Union and European integration. The party wants to build an "economically and politically stronger European Union, we envisage an EU that is a more effective and a more prominent actor in world politics".[9] The party advocates a membership in the North Atlantic Treaty Organisation (NATO).

The party is one of the most supportive parties regarding work-based immigration.[14][15]

The party has long supported initiatives of allowing shops and restaurants to serve customers on Sundays.[16][17]

Polls show that as of 2008, the National Coalition Party is the party that has been viewed most positively by Finns[18] and its membership has been on the rise.[19] Out of the major parties, the National Coalition Party has the highest proportion of women (2005 statistics)[20] and is the most favored party among young generations.[21][22] The party has the strongest support in the cities of Southern Finland and is popular among entrepreneurs, although does not associate with any particular social group. 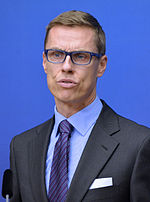 People can join various member organizations in the party. The main organization consists of municipal chapters, organized into districts. As with other major parties, each chapter sends a representative to an annual party congress. A party council, consisting of 1–9 representatives from each district, selects the party management. The party management, which is the active daily management of the party, has a representative from each district as well as representatives from three member organizations (youth, women's, and student wings), three vice presidents and the party president (currently Alexander Stubb). The party has a main office, headed by the party secretary. There is a parliamentary group with a separate president, and the group has an office with staff; a European Parliament group (a subsection of the European People's Party group); and the group of ministers.

The party's Women's League (Kokoomuksen Naisten Liitto/Samlingspartiets Kvinnoförbund, or shortly Kokoomusnaiset) brings women together and focuses on improving gender equality in Finland and around the world. It believes that "women and men must have the same opportunities and rights to come to life, grow up, receive education, participate, work and care".[25] The Swedish-language activities are organised by the Centre-right Coalition in Finland (Borgerlig samling i Finland, BiF). The National Rainbow Group (Kansallinen sateenkaariryhmä) is a member organization that brings together people interested in LGBT politics.

The National Immigrants (Finnish: Kansalliset Maahanmuuttajat, Kamut) seeks to bring together immigrants who are interested in politics.[26]

The party was founded 9 December 1918, after the Finnish Civil War, by the majority of the Finnish Party and the minority of the Young Finnish Party supporting monarchy.[27] (The previous day the republicans of both parties had founded the National Progressive Party.[28]) The founding meeting declared, "A national coalition is needed over old party lines that have lost meaning and have too long separated similarly thinking citizens. This coalition's grand task must be to work to strengthen in our nation the forces that maintain society. Lawful societal order must be strictly upheld and there must be no compromise with revolutionary aspirations. But simultaneously determined constructive reform work must be pursued."[29] The party sought to accomplish this by advocating constitutional monarchy and, failing that, strong governmental powers within a republican framework; and by implementing a number of social and economic reforms, such as compulsory education, universal health care, and progressive income and property taxation.[30]

In the late 1920s and early 1930s the threat posed by the Joseph Stalin's communist Soviet Union influenced Finnish politics. Communists, backed by Soviet leaders, accelerated their activities. The ideological position was strongly conservative, and this was poorly received particularly by the youth, who were attracted to irredentist and outright fascist movements instead, such as the Academic Karelia Society or Patriotic People's Movement.[31] Although Pehr Evind Svinhufvud, the party's first President, played a key role in halting the Lapua Movement, in the 1933 parliamentary election the party formed an electoral coalition with Patriotic People's Movement, founded by former Lapua Movement supporters. The result was a major defeat. The party lost 24 of its previous 42 seats in the parliament. It made a break with the Patriotic People's Movement in 1934 under the newly elected chairman J.K. Paasikivi. Nevertheless, it was shut out of government until the outbreak of the Winter War and only slowly gained back support.[32] During both the Winter War and the Continuation War, the party took part in unity governments and generally strongly supported government policies. After the war the National Coalition Party sought to portray itself as defender of democracy against the resurgent Finnish communists. Paasikivi, who had advocated making more concessions to Soviet Union before the Winter War and taken a cautious line with regard to cooperation with Germany before the Continuation War, acted first as Prime Minister (1944–1946) and then as President (1946–1956). The conflict between the party and the communist Finnish People's Democratic League culminated when President Paasikivi fired the Communist Minister of the Interior Yrjö Leino, who had used the security police to spy on the party's youth organization among other abuses.[33][34]

In 1951 the party changed its name from the original Kansallinen Kokoomuspuolue to the current Kansallinen Kokoomus. The 1950s were also a time of ideological reform, as emphasis on individual liberty and free market reforms increased at the expense of social conservatism and maintaining a strong government. A minor division in 1958 led to the formation of the Christian Democrats.

From 1966 to 1987 the party was shut out of government. By criticizing President Urho Kekkonen and Finnish communists, the party had lost the President's trust and governments based on the Centre Party and left-wing parties followed one another. A new guard emerged within the party in the 1970s that sought to improve relations with President Kekkonen. Their work was partially successful in the late 1970s.[35] However, even though the party supported Kekkonen for president in 1978 and became the second biggest party in the country in the 1979 parliamentary election, a place in the government continued to elude it until the end of Kekkonen's time in office.

In 1990, the Youth Union of National Coalition was the first significant political organization in Finland to publicly advocate membership in the European Union.[36]

Jyrki Katainen was elected the party chairman in 2004. In March 2006, Katainen was elected Vice-President of the European People's Party (EPP). Under the leadership of Katainen, chairman from 2004 to 2014, liberalism has become the main attribute of the party.[37] It is now moderately liberal and reformist,[38] and supports, among other things, multiculturalism[10] and same sex marriage.[39]

The current leader is Alexander Stubb, elected on 14 June 2014.

File:Eduskuntavaalit 2011 - Kansallinen Kokoomus.svg
Support for the National Coalition Party by municipality in the 2011 parliamentary election. The party has traditionally fared well in large urban areas, such as those in the Helsinki, Tampere and Turku regions. The party's strongest municipality was the city of Espoo, where the NCP received 40 per cent of the vote.

The National Coalition Party had been in the opposition since the 2003 parliamentary election, in which it suffered a defeat, getting only 18.6% of the votes and losing six seats to bring its total down to 40. (It later gained two seats through defections.) In the 2007 parliamentary election the party increased its share to 50 seats in what was the biggest gain of the election. The party held a close second place in the Parliament after the Centre Party, which had 51 seats. The Social Democratic Party were third with 45 seats. After the election the party entered into a coalition government together with the Centre Party, the Green League, and the Swedish People's Party. The NCP got important portfolios, including those of Finance and Foreign Affairs.

In the 2011 parliamentary election the party finished first place for the first time in history with 44 seats, despite losing six seats. After lengthy negotiations party chairman Jyrki Katainen became Prime Minister in a six-party coalition government, which includes parties from left to right.

The National Coalition Party's candidate in the 2006 Finnish presidential election was former Minister of Finance and ex-party chairman Sauli Niinistö. He qualified for the second round runoff as one of the top two candidates in the first round, but was defeated by the incumbent Tarja Halonen with 51.8% of the vote against his 48.2%. The party again nominated Sauli Niinistö for the presidential election of 2012. Niinistö won the election, beating his Green opponent decisively on the second round with an overwhelming 62.6% portion of the votes, and thus becoming the third president elected from the party. Niinistö's margin of victory was larger than that of any previous directly elected president. He won a majority in 14 of the country's 15 electoral districts.[40] Niinistö has emphasized nonpartisanism. When he became President, he gave an emotional speech in which he thanked not only those who backed him in the campaign, but also those who disagreed with him. Niinistö said that the differing views expressed should be taken into consideration in the work of the president.[41]