National Commission for Culture and the Arts

The National Commission for Culture and the Arts of the Philippines (Filipino: Pambansang Komisyon para sa Kultura at mga Sining, Cebuano: Nasodnong Komisyon alang sa Budaya ug mga Arte), is the official arts council for the Philippines. It is the overall policy making body, coordinating, and grants giving agency for the preservation, development and promotion of Philippine arts and culture; an executing agency for the policies it formulates; and task to administering the National Endowment Fund for Culture and the Arts (NEFCA) -- fund exclusively for the implementation of culture and arts programs and projects. 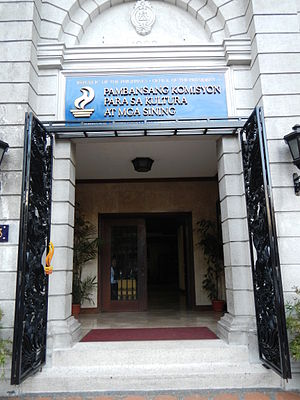 The first attempt to operationalize the 1935 provision on arts and culture took place after almost three decades. On August 4, 1964, President Diosdado Macapagal signed into law Republic Act No. 4165 otherwise known as the National Commission on Culture Law. The law mandated the creation of a National Commission on Culture which was designated as the lead agency in the formulation of an integrated and coordinated national policy on culture. Senator Maria Kalaw Katigbak, the principal author of the law, was prompted by two events to submit it for legislation. One, the Philippine exhibit at the Seattle World Fair prepared by the department of commerce and foreign affairs failed to include a portion on Philippine culture. Second, Leonardo da Vinci’s Mona Lisa went on a tour organized by the French government’s commission on culture and in case a similar work of art by a Filipino goes on a tour, which government agency will facilitate the tour? She felt that these gaps may be address by creating the said commission.[1]

Upon signing the law, President Macapagal immediately appointed six commissioners: Lamberto Avellana, for drama and cinema; Napoleon Abueva, for sculpture; Celso Carunungan, for literature; Trinidad F. Legarda, for music; Carmen Adevoso, for dance; Purita Kalaw Ledesma, for painting; and Carlos Fernandez as representative of the general public.[2] But that was how far the commission did go. Their names were not even submitted to Congress for confirmation. The members were not also able to meet as a body for they were not enough to constitute a quorum. Purita Kalaw Ledesma blames politics for the unfortunate outcome of the commission:

…politics soon spread its tentacles over the project, aborting it and thwarting all our efforts. Many people wanted to put a finger in the Commission pie, and they asked President Macapagal to appoint them to the Commission. It was rumored that there were a total of 600 applicants, and since it was re-election year, the President didn’t want to displease anybody. As a result the law was never implemented and the Commission never got to first base.[3]

In a stroke of a pen, Maria Kalaw Katigbak’s National Commission on Culture was rendered inoperative. Just two years after the commission was constituted, President Ferdinand Marcos issued Executive Order No. 30 which mandated the establishment of a trust called the Cultural Center of the Philippines (CCP). The Center was established for the following purposes: to construct, establish and maintain a national theater, a national music hall, an art gallery and such other buildings and facilities as are necessary or desirable for the holding of conferences, seminars, concerts and the like; to awaken the consciousness of our people to our cultural heritage, and to encourage them to assist in its preservation, promotion, enhancement and development; to cultivate and enhance public interests in, and appreciations of, distinctive Philippine arts in various fields; to discover, assist and develop talents, connected with Philippine cultural pursuits and create greater opportunities for individual and national self-expression in cultural affairs; to encourage the organization of cultural groups, associations or societies and the holding or staging of cultural exhibitions, performances and similar activities; and to bring into the country foreign artists whenever in the opinion of the Center, performance by such artists would enhance the country's cultural development.[5]

The establishment of the Cultural Center of the Philippines drove the final nail in the coffin of the National Commission on Culture. Apart from being overshadowed, it was even further downgraded thereby securing the supremacy of the CCP in the national cultural agenda of the government. Following the imposition of Martial Law, the reorganization of the bureaucracy became the first step of the Marcos regime. Marcos enacted the Integrated Organization Plan in 1972 which came as a result of the study of the Commission on Reorganization. The objective of reorganization was to promote simplicity, economy and efficiency in the government to enable it to pursue programs consistent with national goals for accelerated social and economic development and to improve the service in the transaction of the public business in government agencies.[6] With this, the National Commission on Culture was recommended for abolition and its functions and applicable appropriations were to be transferred to the National Institute of Arts and Letters.

From an office under the Office of the President, the Institute was recommended to be placed under the Department of Education. It was intended to assume responsibility for establishing an integrated and coordinated national policy of arts and letters and in formulating and implementing a national development and promotion program in Philippine arts and letters. It was recommended to be governed by a Board of Trustees composed of a Chairman of recognized competence in the field of arts and letters; the Director of the National Library; the Director of the National Museum; the Chairman of the National Historical Institute; and a representative from each form of Philippine arts and letters: music, drama, painting, sculpture, architecture, literature, and dance.[7]

The successful overthrow of the Marcos administration in 1986 provided the necessary impetus to inspire the different sectors of society to rally behind the new government towards the restoration of democracy. In March 12, 1986, an assembly of artists called the Alliance of Artists for the Creation of a Ministry of Culture (AACMC) drafted and adopted a proposal for the establishment of a Ministry of Culture. The group cited the inability of the Ministry of Education, Culture, and Sports to devote time and attention to cultural planning due to the gargantuan task of addressing the problems of the educational system. Moreover, it also made reference to the previous dictatorial regime’s employment of culture as a self-serving instrument to consolidate its power over the people.[8]

President Corazon Aquino responded to this clamor by issuing Executive Order 118 on January 30, 1987 which established the Presidential Commission on Culture and the Arts (PCCA). It was a diminutive agency compared to the proposal of AACMC but the said order was cognizant of the existence of specialized cultural agencies and that these should only be placed under the umbrella of one agency to coordinate their efforts. Then National Museum Director Father Gabriel Casal recognized the benefit of such setup:

For the first time, cultural agencies are able to come together and discuss common problems, challenges, and needs. By being together under PCCA, we can consolidate our resources and avoid duplication of programs, thereby maximizing funding and training. Cultural agencies want to become more useful to the general public.[9]

Further, the promulgation of the 1987 Constitution not only renewed state commitment to culture and arts but it also developed a balanced approach towards its various expressions such as artistic creations, historical and cultural heritage, and cultures and traditions of indigenous communities:

Section 14. The State shall foster the preservation, enrichment, and dynamic evolution of a Filipino national culture based on the principle of unity in diversity in a climate of free artistic and intellectual expression.

Section 15. Arts and letters shall enjoy the patronage of the State. The State shall conserve, promote, and popularize the nation’s historical and cultural heritage and resources, as well as artistic creations.

Section 16. All the country’s artistic and historic wealth constitutes the cultural treasure of the nation and shall be under the protection of the State which may regulate its disposition.

Section 17. The State shall recognize, respect, and protect the rights of indigenous cultural communities to preserve and develop their cultures, traditions, and institutions. It shall consider these rights in the formulation of national plans and policies.

Section 18. (1) The State shall ensure equal access to cultural opportunities through the educational system, public or private cultural entities, scholarships, grants and other incentives, and community cultural centers, and other public venues.

(2) The State shall encourage and support researches and studies on the arts and culture.[10]

In 1992, under the new constitution, Congress enacted Republic Act No. 7356 which institutionalized the establishment of the National Commission for Culture and the Arts (NCCA) replacing PCCA. This said law mandated the formulation of national cultural policies and programs according to the following principles:

a) pluralistic, fostering deep respect for the cultural identity of each locality, region or ethno-linguistic locality, as well as elements assimilated from other cultures through the natural process of acculturation;
b) democratic, encouraging and supporting the participation of the vast masses of our people in its programs and projects;
c) non-partisan, open to all people and institution, regardless of creed, affiliation, ideology, ethnic origin, age, gender or class, with no organized group or sector having monopoly of its services; and
d) liberative, having concern for the decolonization and emancipation of the Filipino psyche in order to ensure the full flowering of Filipino culture.[11]

The establishment of the NCCA prompted the cultural agencies that were attached to it, by virtue of the same law, to review its existing mandates and programs to harmonize the delivery of cultural services. CCP, for its part, transformed itself to become the national coordinating center for the performing arts. It also sought to remove its “elitist” image by strengthening its outreach programs and developing partnerships with local arts councils.[12]

The NCCA logo is the Alab ng Haraya (The Flame of Imagination), which symbolizes the spring of Filipino art and culture. It is composed of two basic elements – the fire and the censer. The fire is a stylized character "ka" of the Philippine indigenous script Baybayin, that stands for kadakilaan or greatness. The fire represents the highest level of imagination and emanates from a three-tiered censer. The three tiers stand for organization, economic support, and an orientation rooted on a thorough grasp of tradition and history, which the NCCA provides. It is done in gold to symbolize the immense wealth of Philippine culture.