National Day of the Republic of China

As a result of the Chinese Civil War, the government of the Republic of China lost control of mainland China and relocated to Taiwan in December 1949. National Day is now mainly celebrated in Taiwan, but is also celebrated by some overseas Chinese. 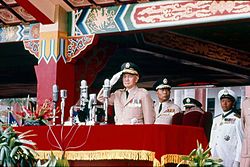 During the establishment of the ROC, Taiwan was under Japanese rule, which began in 1895. In 1945, after surrender of the Empire of Japan in World War II, Taiwan was placed under the control of the ROC.

In Taiwan, the official celebration begins with the raising of the flag of the Republic of China in front of the Presidential Building, along with a public singing of the National Anthem of the Republic of China. It is then followed by celebrations in front of the Presidential Building; from time to time, a military parade may occur. Festivities also include many aspects of traditional Chinese and/or Taiwanese culture, such as the lion dance and drum teams, and cultural features coming from Taiwanese aborigines are integrated into the display in recent years. Later in the day, the President of the Republic of China would address the country and fireworks displays are held throughout the major cities of the island. In 2009, all government sponsored festivities for the Double Ten Day were cancelled, and the money intended for the festivals (NT$ 70 million) were reallocated for reconstruction of the damage done by Typhoon Morakot. 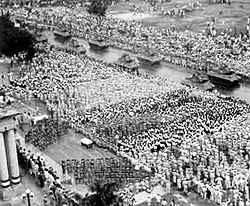 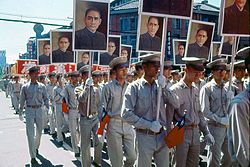 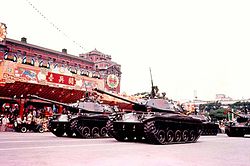 Republic of China Army Tanks in front to the Presidential Office during the 1966 Double Ten celebration. 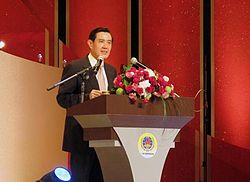 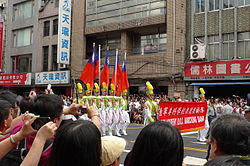 Cadets from the ROC Military Academy on march during the 2011 Double Ten celebration.

In the past, the Military of the Republic of China has traditionally put on a military parade. During this parade, troops and equipment are marched past a reviewing platform in front of the Presidential Building. Typically, foreign ambassadors, military officers, and other representatives and dignitaries are invited to view the parade.

The parade has been held intermittently during the period of the Republic of China on Taiwan. The military parade on October 10, 1949 was the first public military parade held in Taiwan with Chen Cheng serving as the Grand Review Officer. The 1964 National Day parade was struck by tragedy when a low flying airforce F-104 Starfighter fighter aircraft struck a Broadcasting Corporation of China tower, causing the plane's fuel tank to fall and kill three people including a woman and her baby in front of the Central Weather Bureau building in downtown Taipei. The other two remaining F-104 aircraft were ordered to look for the crashed aircraft and accidentally collided and crashed in Tucheng City, Taipei County (now New Taipei City) killing both pilots. The parade was not held again until 1975. When Chen Shui-bian became President, the parade was not held until 2007 and then it was entitled a "Celebration Drill" and not a traditional military parade. Since Ma Ying-jeou became president, one parade has been held on the centenary celebrations of the Double Tenth Day.

Celebration outside of Taiwan 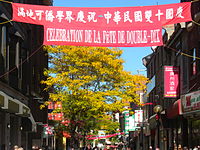 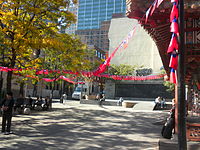 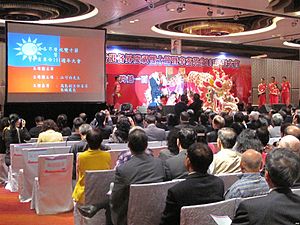 The ROC National Day was a public holiday in Hong Kong until the government of the United Kingdom cut its diplomatic ties with the ROC Government. After the civil war in mainland China, the National Day was celebrated in regions inhabited by Chinese patriots who remained loyal to the Republic, such as Tiu Keng Leng. Before the sovereignty of Hong Kong was transferred to the PRC in 1997, many ROC supporters there would display patriotic and colorful flags (mainly the national flag of ROC) to celebrate the National Day. Taiwan agencies such as the Kwang Hwa Information and Cultural Center in Hong Kong have annually held a public ceremony to celebrate the National Day of ROC with members of pro-ROC private groups.[5] The day continues to be celebrated in Hong Kong after the transfer of sovereignty to the mainland, but the national flags publicly shown have been removed by Police of Hong Kong ever since July 1997.[6] Flag-raising ceremony at Hung Lau, Tuen Mun, Sun Yat-sen's revolutionary base, is the most noticeable event.

As the Communist Party of China seized control of mainland China in 1949, October 10 is now celebrated in the People's Republic of China as the anniversary of the Xinhai Revolution and the Wuchang Uprising.